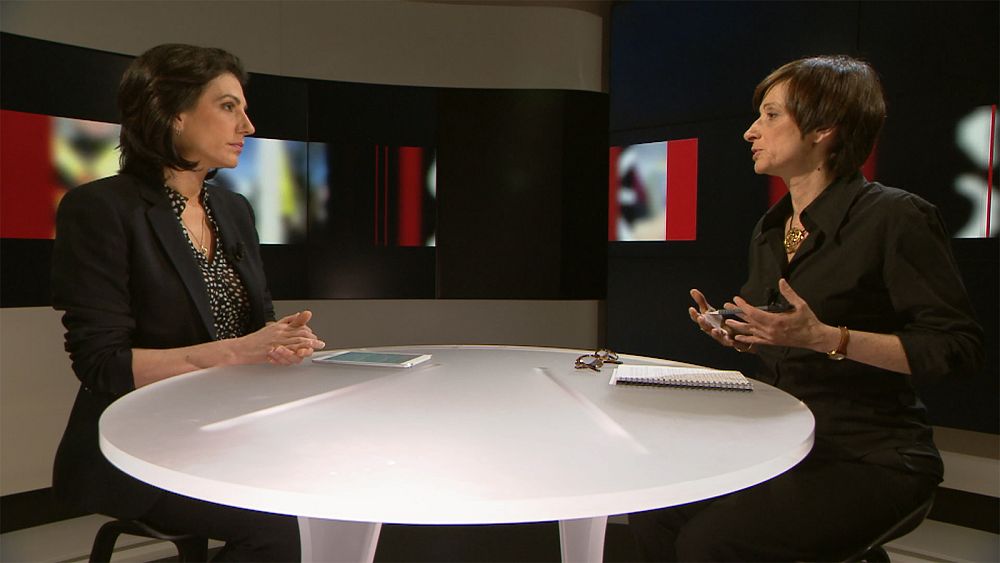 Sophie Claudet: Valerie, just back from Belarus, thanks for being with us.

We saw in your report that you met with several dissidents, including high level dissidents, how easy was it to have access to them?

Valerie Gauriat: Well actually it was quite easy. All these people are craving for expression. Talking to the media, especially the foreign media, as the national, the local media is pretty muzzled, is an opportunity to speak out.

Sophie Claudet: We hear people in your report expressing their fear. Fear of the police, fear of the system, of the government, was it palpable for you as a foreigner in Belarus, this fear?

Valerie Gauriat: People are saying, ‘it’s not so much what you see’, as ‘what is unseen’. And they tell us stories of intimidation, stories of people losing their jobs for speaking out too openly.

Sophie Claudet: So there is this window of opportunity, or possibility at least for people to speak out. We saw that this year’s celebrations were allowed by the government. We heard as well that a political movement was accepted…an opposition political movement was accepted for the first time in the past ten years. Does it mean that Belarus is opening up at long last?

Valerie Gauriat: There is an opening, there are changes. The mere fact that the celebrations were held on the 25th March is a very big sign of this. There is a new dialogue between the government and civil society. The Belarussian government has a new action plan for human rights. They are thinking about changes in their constitution. They’re thinking about an electoral reform. They’re considering changes as regard to the death penalty, which is a request from the European Union.

In general terms, Belarus is very keen on improving its relations with the EU to have a new balance of power of influence between the EU and Russia, of which it is very dependant.

Sophie Claudet: Is there a fear that those changes could only be cosmetic to please the EU?

Valerie Gauriat: It probably will be a long road, as, again, the foreign minister told me, mentalities have to change.

Sophie Claudet: But they want to change, it’s not cosmetic?

Valerie Gauriat: They say they want to change.

Opposition leaders don’t believe that. They say it’s not enough. They say repression is still too strong. Torture still exists according to them. And opposition is crushed apart from very few people.

Sophie Claudet: A very essential point that was made by one of the people you interviewed in your report: is there a fear that Belarus could be annexed the same way Crimea was by Russia.

Valerie Gauriat: I met the head of the press club there. She pointed out that since the events in Ukraine, some Russian media had started to question the independence of Belarus, its language, which is one of the two official languages in the country, with Russian. And 50% of the Belarussian media content is in Russian. So the concerns are not so much of a physical takeover, but rather some kind of internal takeover and resurgence of a very strong Russian influence. That’s, I would say, the main concern. On the other hand, other people will say, ‘well Belarus is small, it’s not interesting in geopolitical terms, so Moscow would have no interest in invading Belarus as such. And also, Belarus is dependent economically on Russia, so they don’t really need to put more pressure on the country.

Sophie Claudet: Well thank you very much for being on Insiders. Thanks for being with us.