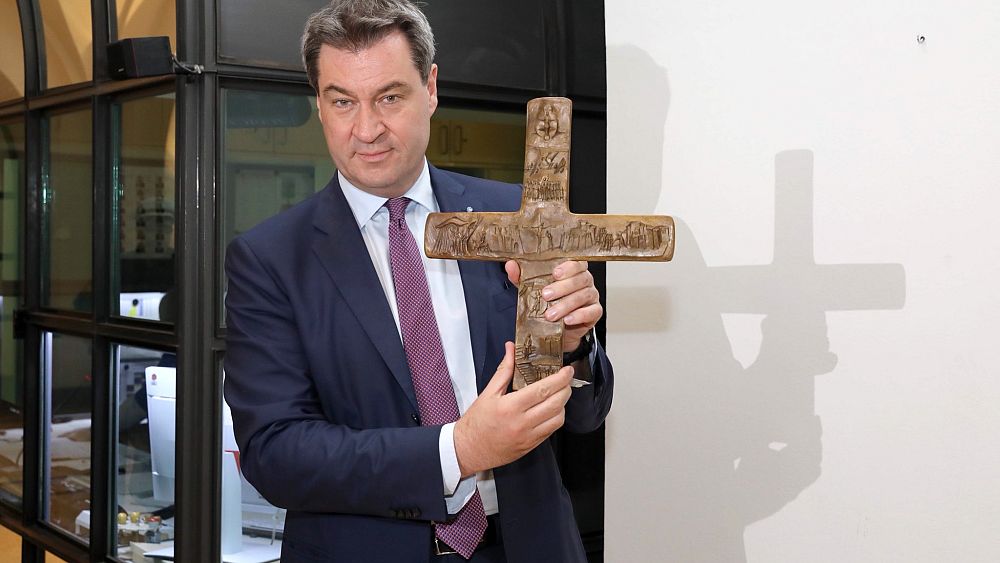 A cross will be hanging in all Bavarian government authority buildings from June 1, following a decision by the state cabinet.
The symbol is meant to signal a Christian cultural identity, according to Bavarian Minister President Markus Söder.

“The cross is not the sign of a religion,” he said after the cabinet meeting.

In order to safeguard against possible lawsuits over breach of neutrality, the cross will not need to be displayed in classrooms or other rooms of public building but only in the foyer. As people will only be passing through entrance areas, it could not be deemed to cause offence, Bavaria’s minister for interior Joachim Herrmann said.

The new law will only apply to state government buildings, although local authorities have also been encouraged to follow suit.
Translation: Clear commitment to our Bavarian identity and Christian values. Today Cabinet decided that a cross should be displayed in each state authority building from 1 June. Immediately after the meeting, I hung a cross in the entrance of the State Chancellery.

While Catholic organisations welcomed the move, opposition politicians accused Söder of political point scoring ahead of the local elections in October.

The argument the law was not religiously motivated but cultural did not convince many on Twitter. Users voiced their opposition, some commenting that the law goes against the separation of church and state, and accusing the state’s government of trying to turn back the clock. However, the law did strike the right note with some, who equated the crucifix with the wearing of the Muslim hijab, and the selling of Halal meat

And Twitter being what it is obviously had some comedy comebacks, ripping into the official tweet of Söder brandishing the cross now hanging in the Chancellery.