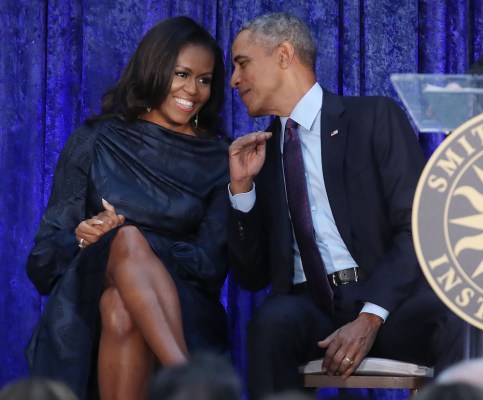 Another (very) big deal for Netflix: Former U.S. President Barack Obama and Michelle Obama have reached an agreement to produce films and series for the streaming service.

The New York Times first reported in March that the Obamas were in “advanced negotiations” with Netflix. The goal, supposedly, was less about criticizing the Trump Administration or promoting any specific political message, and more about highlighting inspirational stories.

Netflix’s official announcement makes it sound like that continues to be what the Obamas have in mind, with Chief Content Officer Ted Sarandos describing them as “uniquely positioned to discover and highlight stories of people who make a difference in their communities and strive to change the world for the better.”

The Obamas have formed a company called Higher Ground Productions to create this content.

The financial terms of the deal were not disclosed, but Netflix has deep pockets and has shown a willingness to write very large checks.   It says the Obamas might produce “scripted series, unscripted series, docu-series, documentaries and features” — so basically any kind of audiovisual content.

In a statement, Mr. Obama said:

One of the simple joys of our time in public service was getting to meet so many fascinating people from all walks of life, and to help them share their experiences with a wider audience. That’s why Michelle and I are so excited to partner with Netflix – we hope to cultivate and curate the talented, inspiring, creative voices who are able to promote greater empathy and understanding between peoples, and help them share their stories with the entire world.

Michelle Obama’s memoir Becoming is scheduled for publication in November, while Barack Obama is expected to release a new memoir as well under the same deal. He’s kept a relatively low profile since leaving office, but he did make a recent appearance as the first guest David Letterman’s Netflix interview show My Next Guest Needs No Introduction.