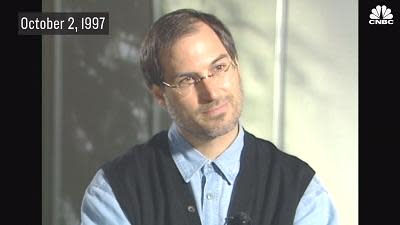 In the first quarter of 2018, Apple shipped 16 million units of its iPhone X in three months, according to a study by Strategy Analytics, landing the top spot as the world’s best selling smartphone.

But over 30 years ago, Apple’s co-founder Steve Jobs was still having to explain how computers would be useful to regular people.

“A computer is the most incredible tool we’ve ever seen. It can be a writing tool, a communications center, a supercalculator, a planner, a filer and an artistic instrument all in one, just by being given new instructions, or software, to work from,” Jobs said to Playboy in a 1985 interview.

At that time, computers were expensive and difficult to use. Jobs, however, had a vision for what they may someday become. Here are three predictions he made in 1985 that he got right, and one he got wrong.

1. Computers will be used at home, for fun

By 1985, Apple had released four computers: The Apple I in 1976 , the Apple II in 1977 , the Lisa in 1983 , and the Macintosh in 1984 . Those models were primarly used in offices for business computations or for education in schools, according to the Playboy article.

“You really can prepare documents much faster and at a higher quality level, and you can do many things to increase office productivity. A computer frees people from much of the menial work,” Jobs told Playboy.

But, there wasn’t much reason to use a computer during your leisure time. Jobs described the idea of home computers as, “more of a conceptual market than a real market,” at that time.

“The primary reasons to buy a computer for your home now are that you want to do some business work at home or you want to run educational software for yourself or your children,” Jobs explained. However, he imagined the potential.

“This will change: Computers will be essential in most homes,” Jobs predicted.

In 2017, the average American household reported owning two Apple products, according to a poll by CNBC. Today, consumers spend so much of their free time interacting with technology and social media that some experts argue we’re facing tech addiction .

2.  We will use computers to interact with each other

Jobs predicted that what would make computers more useful — for purposes outside of business — would be connectivity.

“The most compelling reason for most people to buy a computer for the home will be to link it into a nationwide communications network,” Jobs told Playboy.

When he made that prediction in ’85, he was four years ahead of Tim Berners-Lee’s 1989 work to develop a system called the World Wide Web. “Berners-Lee wrote the first web page editor and web browser in his office at CERN [the European Organization for Nuclear Research], and by the end of 1990 the first web page was posted online,” The New York Times explains.

The creation of a long distance communications network for computers had begun decades earlier as an academic research project called ARPANET , funded by the U.S. military. ARPANET became the foundation for the modern internet when engineers Vint Cerf and Bob Kahn began building new standards for the network, called TC/IP. ARPANET switched to that standard on January 1, 1983, paving the way for an open global network.

Now, everything from vacuums to light switches are connected to the internet — and it’s a driving trend in technology known as the “Internet of Things .” The potential economic impact of smart device adoption could be anywhere between $3.9 and $11.1 trillion by 2025, according to analysis from the McKinsey Global Institute.

3. Computers will have a mouse

As hard as it may be to imagine, computers weren’t always operated with a mouse. Before Apple introduced the Lisa and the Macintosh (which featured a mouse and a graphical user interface) most commercially sold personal computers needed to have instructions and commands typed with a key board.

Jobs defended his support for the mouse: “If I want to tell you there is a spot on your shirt, I’m not going to do it linguistically: ‘There’s a spot on your shirt 14 centimeters down from the collar and three centimeters to the left of your button.'” Jobs told Playboy. “If you have a spot—’There!’ [he points]—I’ll point to it. Pointing is a metaphor we all know.

“It’s much faster to do all kinds of functions, such as cutting and pasting, with a mouse, so it’s not only easier to use but more efficient.”

The mouse, combined with a graphical user interface, let users click through visual icons and imagery on a computer like windows and drop-down menus. It was an “advance that would finally make computers usable by people with no special training,” Wired reported .

Ironically, Apple’s popularization of touch-screen technology through iPhones and iPads may someday spell the end for the mouse .

In 1985, Jobs predicted that there would only be a few computer companies manufacturing hardware and a plethora of businesses working on software. He turned out to be wrong.

“In terms of supplying the computer itself, it’s coming down to Apple and IBM,” Jobs told Playboy. “And I don’t think there are going to be a lot of third- and fourth-place companies, much less sixth- or seventh-place companies. Most of the new, innovative companies are focusing on the software. I think there will be lots of innovation in the areas of software but not in hardware.”

In fact, nearly the opposite turned out to be true: Microsoft held such a strong grip on the market for computer software that in 1998, the United States filed an anti-trust lawsuit against it to investigate if Bill Gates’ company held a monopoly.

Don’t miss: Read this 1976 letter from a Silicon Valley exec that calls Steve Jobs ‘flaky’ and a ‘joker’

Rabobank: “What If We Are On The Brink Of An Exponential Increase In Coronavirus Cases?”
2020-01-28