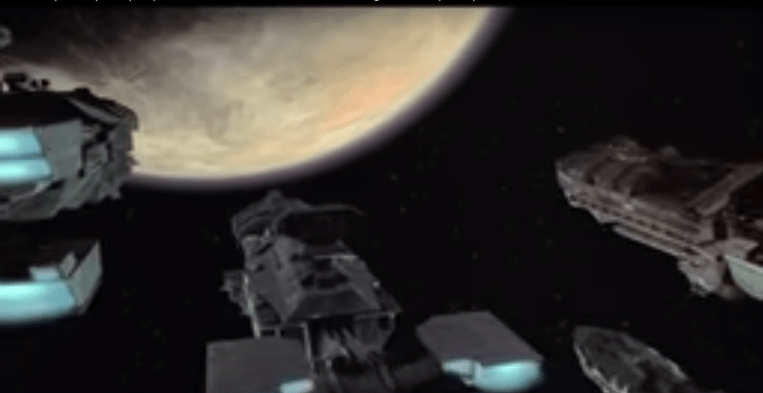 Defense Secretary James “Mad Dog” Mattis voiced opposition to the creation of new branch of the military last year when the idea was first proposed by Congress.

Congressional leadership first floated the creation of sixth branch of the armed forces focused on space combat (sadly, not against invading alien insects though) last year… and Mattis promptly blasted the idea.

In a letter to Ohio Representative Mike Turner, one of the leaders of the Space Force initiative in Congress, Mattis wrote:

At a time when we are trying to integrate the Department’s joint warfighting functions, I do not wish to add a separate service that would likely present a narrower and even parochial approach to space operations.

Apparently, the president has come around on the subject in the intervening months.

Trump is now “directing the Department of Defense and Pentagon to immediately begin the process necessary to establish a space force as the sixth branch of the armed forces.”

The House Armed Services Committee began pushing for the creation of a space corps last year as part of the last spending authorization bill for the military. The new military force would fall under the purview of the Air Force in the same way that Marines work with the Navy, according to the proposal.

That spending authorization bill was ultimately approved, but the space corps proposal was left on the cutting floor.

Now the proposal is taking flight at the highest levels of the Trump administration. The newly reconvened Space Council is helmed by Vice President Mike Pence. At today’s announcement were celebrity astronauts like Jack Schmitt, Buzz Aldrin and Eileen Collins. Also in attendance were Gwynne Shotwell, Wes Bush of Northrup Grumman and Bob Smith, the chief executive of Jeff Bezos’ Blue Origin.

“When it comes to defending America, it is not enough to merely have an American presence in space. We must have American dominance in space,” the president said.

For the president, the establishment of the Space Force is of a piece with a strategy to create a lasting American presence on the Moon — and eventually Mars.

“This time, we will do more than plant our flag and leave our footprints. We will establish a long-term presence, expand our economy, and build the foundation for the eventual mission to Mars — which is actually going to happen very quickly,” Trump said. “And, you know, I’ve always said that rich guys seem to like rockets. So all of those rich guys that are dying for our real estate to launch their rockets, we won’t charge you too much. Just go ahead. If you beat us to Mars, we’ll be very happy and you’ll be even more famous.”

The announcement also put to rest any questions about where the Trump administration would move policy around space exploration.

“I am instructing my administration to embrace the budding commercial space industry,” Trump said. “We are modernizing out-of-date space regulations. They’re way out of date. They haven’t been changed in many, many years. And today we’re taking one more step to unleash the power of American ingenuity.”

The statement from the president also included a discussion of the current administration’s policy of separating children from parents at the U.S. border.

The U.S. is currently operating holding facilities for more than 1,000 migrant children who have been separated from their parents as part of the current administration’s efforts to get tough on immigration and push policy reform.

“We have the worst immigration laws in the entire world. Nobody has such sad, such bad, and actually, in many cases, such horrible and tough. You see about child separation; you see what’s going on there,” the president said.