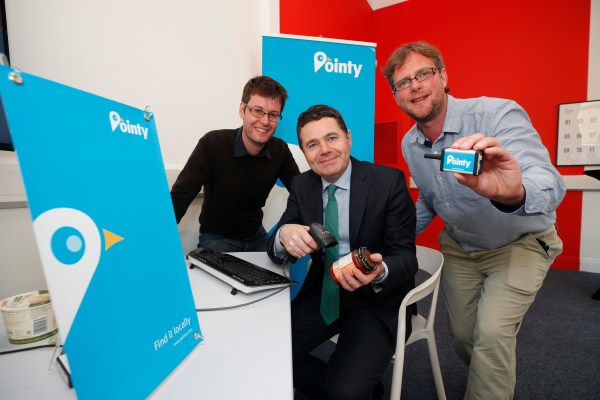 Pointy​,​ the​ ​startup​ ​that​ offers tech to help ​bricks and mortar​ ​retailers put their stock online so that it can be discovered via search engines, has picked up $12 million in new funding. The Series B round is led Polaris Partners and Vulcan Capital, and brings total funding for the Irish company to $19 million.

Founded on the premise that people often resort to e-commerce behemoths like Amazon because they can’t find the same item locally, Pointy has developed a hardware and cloud software solution that makes it easy to create a bespoke website as means of making local stock discoverable online. Specifically, the ​”Pointy​ ​box”​ hardware ​gadget connects to a store’s barcode scanner and automatically puts scanned items on a Pointy-powered website for the store.

Store pages are then optimised for search engines, so that when you search for products locally — say your favourite artisan beer — a Pointy-powered result shows up and encourages you to visit the store and make a purchase. In other words, this is about helping local retailers drive more footfall, but with very little additional overhead.

Pointy CEO and co-founder Mark Cummins says the Series B round will be used by the startup to accelerate growth and build on an increased uptake by U.S. retailers. It currently counts 5,500 retailers using Pointy in total, with 70 percent from the U.S, and the remaining in Canada, U.K. and Ireland. “To put the U.S. number in context, just under 1 in 200 U.S retailers is now using Pointy,” a company spokesperson tells me.

Since we last covered Pointy, the started has extended its reach considerably with partnerships with Lightspeed, Clover and Square, which allows retailers using these POS systems to use the Pointy platform for free because it doesn’t require the purchase of the $499 Pointy device. It has also partnered with Google via the search giant’s new See What’s In Store (SWIS) program so that shoppers can discover what a store sells within Google’s search and maps pages.

“For all the hype around e-commerce and the media narrative of ‘Retail Apocalypse’, people still make the vast majority of their purchases in local stores,” adds Cummins in a statement. “But local retailers have lost out in not having their products visible online – we solve that problem for them”.