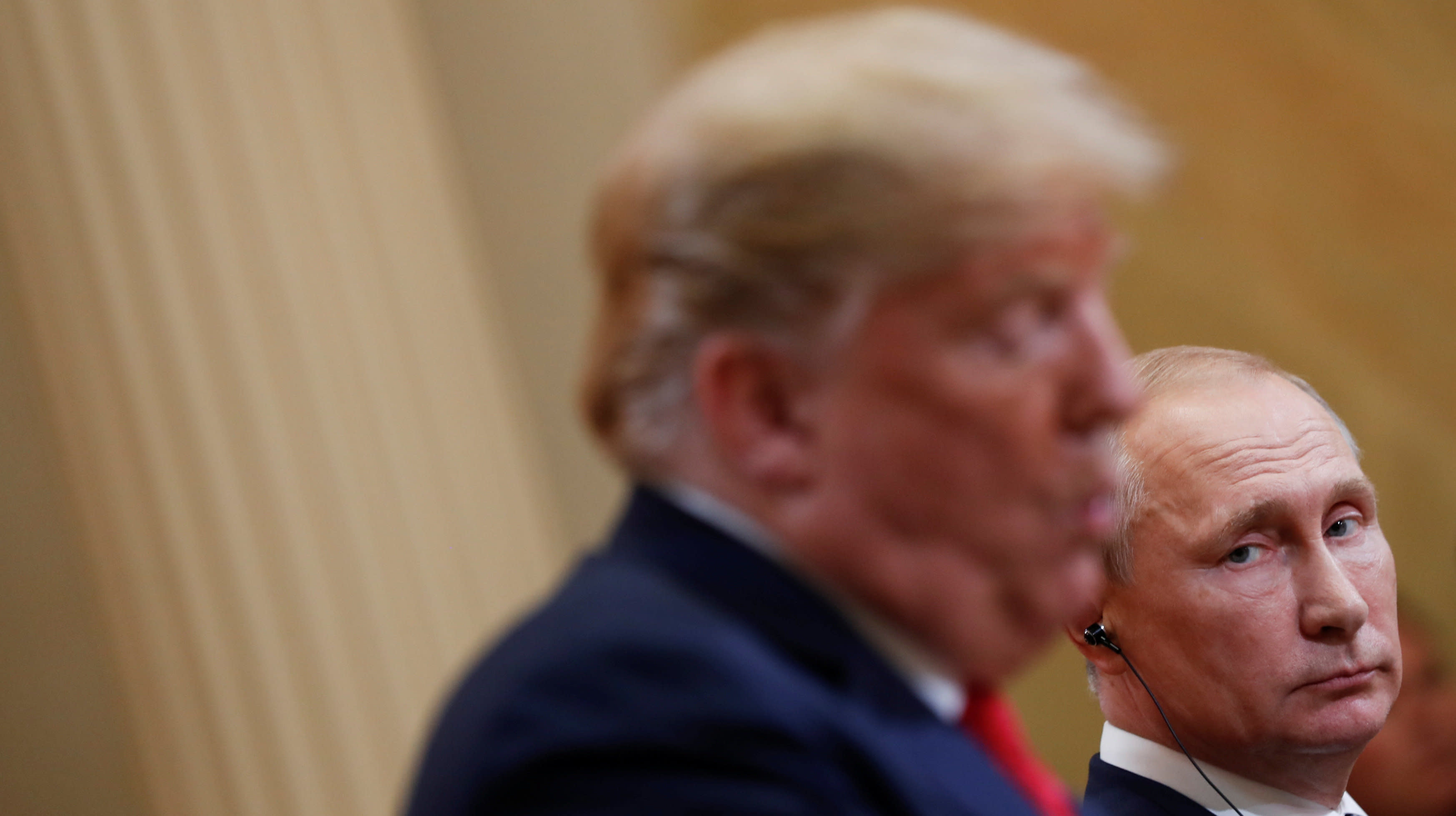 WASHINGTON ― Forced to choose between the Russian dictator who helped him win the White House and the American prosecutors laying out the crimes committed in doing so, the United States president on Monday sided with the Russian.

In an extraordinary 46-minute news conference in Helsinki with Vladimir Putin by his side, U.S. President Donald Trump called special counsel Robert Mueller’s investigation into Russian election interference a “witch hunt” and said both countries were to blame for their poor relationship ― not Russian actions that included the invasion and annexation of Crimea.

“I hold both countries responsible. I think that the United States has been foolish. I think we’ve all been foolish,” Trump said.

From the George W. Bush administration until now, the U.S. has punished Russia with economic and diplomatic sanctions for actions that include Russia’s invasion of Georgia in 2008, its invasion of Ukraine in 2014 to seize Crimea, the shooting down of an airliner that killed 298 passengers and crew, its interference in elections in the United States and Western Europe and, most recently, the use of a nerve agent in England that poisoned four people, killing one.

Trump, though, addressed none of that. “I think we’re all to blame,” he said.

“The president clearly sides with Putin. He is wrong,” said Burns, who now teaches at Harvard. “He is wrong on the facts, and most importantly, he is weak. This is cowardly.”

The news conference followed a two-hour, closed-door meeting between Trump and Putin, attended only by each leader’s translator, and then a “working lunch” that included top staff from both sides.

The president clearly sides with Putin. He is wrong. He is wrong on the facts, and most importantly, he is weak. This is cowardly. Nicholas Burns, former U.S. ambassador to NATO under President George W. Bush

Trump, as he frequently does in his Twitter outbursts, also went into full conspiracy theory mode, demanding to know what happened to the computer server at the Democratic National Committee that had been hacked in 2016, or to Hillary Clinton’s 33,000 emails, or the “Pakistani gentleman that worked on the DNC.”

Putin, for his part, joined in the conspiracy theorizing, tossing out the name of liberal billionaire George Soros, a favorite bogeyman of right-wing activists and media in the United States. Earlier, he admitted he had wanted Trump to win. “Yes, I did. Yes, I did. Because he talked about bringing the U.S.-Russia relationship back to normal,” he said, according to a translator.

Putin did offer to interrogate 12 Russian military intelligence officers indicted on Friday who are accused of stealing emails from Democrats ― a prospect Trump endorsed.

“Clearly, Donald Trump is so beholden to Russia and Putin that he has abdicated American authority on the world stage to a murderous thug,” said John Weaver, who in 2016 ran Ohio Gov. John Kasich’s bid for the GOP presidential nomination. “It’s the most shameful day for American foreign policy since the end of World War II.”

Even Republicans who typically support Trump in his various controversies or try to avoid them entirely found Trump’s deference to Putin troubling.

“I think if I were him, I would have challenged him a little more,” one House member who generally aligns with the pro-Trump Freedom Caucus said on condition of anonymity.

House Speaker Paul Ryan (R-Wis.) released an unusually critical statement: “The president must appreciate that Russia is not our ally. There is no moral equivalence between the United States and Russia, which remains hostile to our most basic values and ideals.”

Trump’s publicly siding with Putin follows his attacks on the United States’ traditional allies at a NATO summit in Brussels and a visit with British Prime Minister Theresa May in England. He harangued NATO members for not spending at least 2 percent of their economic outputs on defense, even though a 2014 agreement gives them until 2024 to reach that goal. And in an interview with a British tabloid, Trump criticized May’s approach to withdrawing from the European Union ― a statement that could weaken her already tenuous hold on her job.

It’s the most shameful day for American foreign policy since the end of World War II. John Weaver, who ran John Kasich’s bid for the GOP presidential nomination

Just days before leaving for Europe, Trump’s own ambassadors to NATO and Russia gave assurances that Trump would show solidarity with the former and toughness with the latter. Instead, Trump delivered exactly the opposite.

“The trip was a calamitous trip. The president attacked NATO and attacked [German Chancellor Angela] Merkel. Threatened to leave NATO. Attacked May when she was at a very weak point. And the kid-glove treatment of our most dangerous adversary? So weak. Very, very weak,” Burns said.

One White House official who spoke on condition of anonymity said there was no plan for Trump to say what he did. “It’s the boss being the boss,” the official said. “We didn’t know he was going to say that stuff.”

Trump had wanted a high-profile, one-on-one meeting with Putin ever since he won the presidency in 2016, but his key advisers dissuaded him during his first year and a half in office. With many of those advisers gone ― such as former national security adviser H.R. McMaster and former Secretary of State Rex Tillerson ― Trump insisted on a summit with Putin during this European visit and got one, even though there was no set agenda or agreement worked out in advance.

And, notwithstanding Trump’s claims of a “witch hunt,” Mueller has now indicted or charged a total of 32 individuals and three companies in his investigation and secured five guilty pleas. Friday’s indictment offers the most detailed guide to how the Russians stole emails from Democrats and released them through groups created or controlled to help Trump.

Trump, meanwhile, both solicited and accepted help from Russia. On July 27, 2016, he said during a news conference: “Russia, if you’re listening, I hope you’re able to find the 30,000 emails that are missing.” Later that same day, according to Friday’s indictment, Russian spy agencies began trying to hack Democratic presidential nominee Hillary Clinton’s server and 76 accounts used by Clinton campaign staff.

And in the final month of the campaign ― weeks after learning from his intelligence briefings that Russia was behind the theft of Democratic emails ― Trump on a near-daily basis praised WikiLeaks for posting them on its website and urged his supporters to read them.

“The damage Trump inflicted today on America’s image, credibility, and respect around the globe will be long-lasting,” said Ned Price, a former CIA analyst and a National Security Council spokesman under President Barack Obama.

“What’s even more shocking: Trump did all of this in plain sight,” Price added. “Americans can only wonder what Trump felt empowered to reveal to Putin in private, a setting that he insisted be away from the eyes and ears of his closest and most trusted advisers.”