On the day after being named successor to Lloyd Blankfein as the Chairman and CEO of Goldman Sachs, David Solomon, the firm’s current President and COO, sat down with interns for an ‘Explore GS’ session. The ‘Explore GS’ series provides our interns around the world with insights and advice from leaders across the firm. 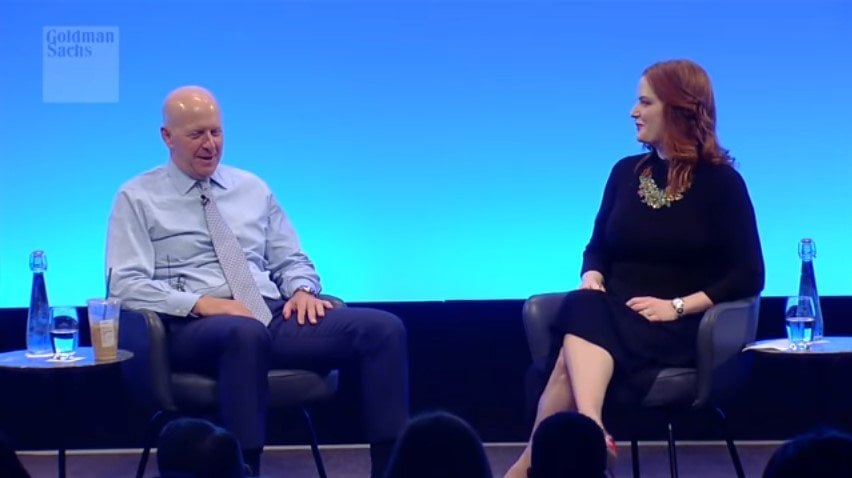 Interns Meet Our Next Chairman And CEO, David Solomon, During An ‘Explore GS’ Session

And so you know I kind of stayed up you know from 9 to almost midnight on Monday kind of thinking about the comments working on the comments went to bed kind of thought I had it set and then I woke up in a panic at 6:00 and said I better work out an hour or so. So it wasn’t my best night’s sleep but but today I feel good. I’m excited. You know really excited about where the firm is and what’s ahead and I’m ready to work.

When you think about because this is obviously a very important milestone memorable moment not only for Goldman Sachs but also for you personally particularly for Goldman but for you as well when you think back about the past sort of 24 hours or even back to the period when you first learned that this new job was yours. Is there a moment or two that you think in 10 years time will still stand out as being really relevant to you and memorable.

Well the whole thing is extremely relevant and memorable. It’s obviously a hugely special moment for the firm it’s very significant for the firm but just for me personally I got on a school like I went to Hamilton College as you all heard. I studied political science. I stumbled into a career in finance. I mean one of the things I admire about all you in this room and on the video and the call all around the globe is you are much more focused in terms of your interest in college than I was or I needed to be the what was not as competitive by the way.

OK. Even much younger than I am.

But the world you know now when you’re in college you really have to be thoughtful about how you spend your summers and you know where are you where you in turn and what you do. You know I worked as a camp counselor. You know during my summers most of my summers while I was in college I really stumbled into finance not because I was driven to finance but I stumbled on it because it was some thing to do away to go to New York or to continue on have a job. And so that you know the context the fact that I started with the Irving Trust Company and I worked at Drexel Burnham and Bear Stearns and I want to put Goldman Sachs the CEO of Goldman Sachs.

But you know with all that I think the moment when Lloyd called me up onto the stage and I know you were in the room watching. I mean I was I was pretty emotional about it. I mean it really affected me it was shaking. And that’s not something I’m going to soon forget. You know a very special moment and would not have a real personal bond for a long period of time. He’s been a great mentor to me personally. And it was a very special moment for me. It’s one of those things you go through life. You know there are enormously special personal things that happen to you.

For me that was a very special personal one and tell us a little bit before we move on to your priorities about how that process actually works. If you could open the kimono which cross us finding out who told you we’re finding out that you’re going run the firm.

Yeah. It’s no magical process. I mean I was minding my own business candidly trying to get stuff done. And Lloyd you know hollered out Hey David are you in there. Lloyds in the office next to me. I was like yes give me a minute I’ll be right then. I walked into his office and he looked at me and said the board has decided that you’re going to succeed me to be the next CEO.

Okay great. How was your lunch. It was. For those of you who don’t know LLOYD That’s Lloyd that is a delivery. And I was like Can I sit down for a minute and he’s like sure what he wants. So I mean it was really it was very very matter of fact and so I excused myself and I kind of went into the office and I you know I I I took a deep breath and then it was like a little bit of a joke Zuzu it’s kind of like.

You go back to work and you couldn’t tell anybody you know that was very gut wrenching and we want to get it you know wanted to wanted to very close personal relationships for the first person outside of work who called when you could.