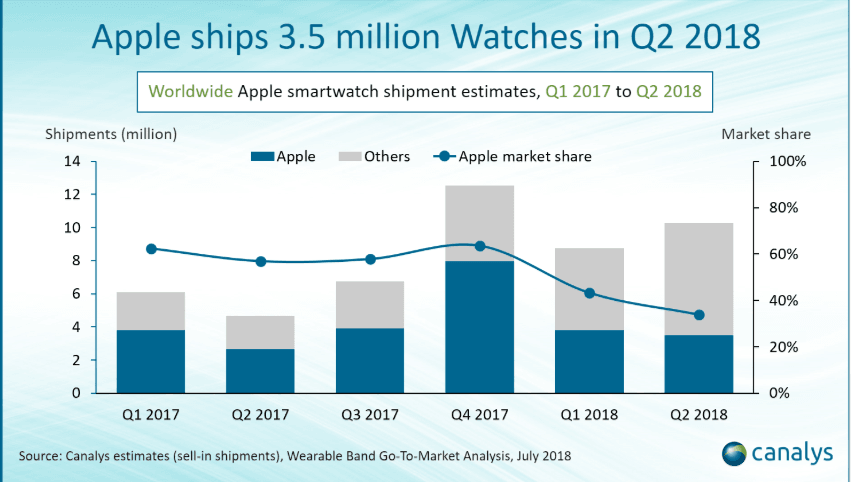 Apple doesn’t break out the Apple Watch sales numbers or revenues. The tech giant bundles them in the “Other” category with HomePods, Apple TVs, AirPods, and Beats products. So, whatever data we have on Apple Watch shipments come from third-party research firms such as Canalys and IDC. Canalys is out with its latest report on smartwatch industry, estimating that Apple shipped 3.5 million Apple Watch units during the second quarter of this year.

Apple remained the world’s largest wearable device maker as April-June quarter shipments jumped 30% compared to the same period a year prior. However, its market share slipped from 43% in Q2, 2017 to 34% in the latest quarter due to fierce competition. Canalys estimates a total of 10 million smartwatches were shipped in the second quarter this year.

Canalys noted that the LTE variant of Apple Watch Series 3 has done incredibly well in China in the April-June quarter. That’s not all. Apple Watch shipments in Asian markets (excluding China) surpassed 250,000 units. The LTE version accounted for more than 60% of them.

Since launching the cellular Apple Watch Series 3 last year, the iPhone maker has been securing carrier deals in different parts of the world to expand its availability. In May, the Cupertino company launched the Series 3 cellular model in India, Denmark, Taiwan, and Sweden. Now the cellular-supported Apple Watch is available in 16 countries around the world.

The carrier deals helped Apple boost Apple Watch shipments outside the United States. Canalys analyst Jason Low told The Verge that telecom carriers in markets such as India and Australia were interested in selling connected devices other than cellular phones because it helps them generate additional revenues from data services. The LTE Watch also helps carriers retain the “high-value” customers who might switch carriers due to cut-throat competition. Canalys says this strategy has worked particularly well in India, where iPhone sales are falling.

Competitors catching up to Apple

Not everything is going right with the Apple Watch shipments. The Cupertino company is facing stiff competition from Garmin and Fitbit, both of which saw strong sales growth during the second quarter. These vendors brought Apple’s market share down from 43% to 34%. Both Garmin and Fitbit are shipping more than a million smartwatches every quarter.

Apple’s rivals are differentiating their products with features like smart coaching, advanced heart-rate metrics, and mapping. Also, consumers have a much wider range of options to choose from now compared to a year ago. Google and Samsung both are rumored to launch Pixel and Galaxy smartwatches later this year, which could further affect the Apple Watch shipments.

A redesigned Apple Watch Series 4 is coming later this year

Apple has to find new ways to drive upgrades in markets such as the US. The company hasn’t changed the design of Apple Watch in years. Recent rumors suggest the upcoming Apple Watch Series 4 will sport an all-new design. The Series 4 is said to have larger displays of 1.57-inch and 1.78-inch, a bigger battery, and improved heart-rate monitoring. The Series 4 Watch is expected to debut in September alongside new iPhones.

Last year, Apple patented a “sunscreen detector” technology that could find its way in the upcoming Apple Watch. The technology monitors sun exposure and can notify the user to apply sunscreen. The watchOS 5 software that will power the next-gen Watch brings support for podcasts, a watch-to-watch walkie-talkie feature, and the ability to play audio from third-party apps.

Bloomberg claims Apple could use a new MicroLED display on the upcoming Watch models. The company has been working on MicroLED screens for over a year. The new display technology will make the Apple Watch “slimmer, brighter, and less power-hungry.” The upcoming Watch is also expected to support Apple’s AirPower charger. TF International Securities analyst Ming-Chi Kuo predicts the AirPower would enter mass production in the third quarter this year, roughly a year after its announcement.

TikTok is reportedly on the hunt for a US-based CEO, and it could be the company's latest step to distance itself from ties to China
2020-01-23

Police: Mom accused of killing her 3 kids said she smothered them while singing
2020-01-23