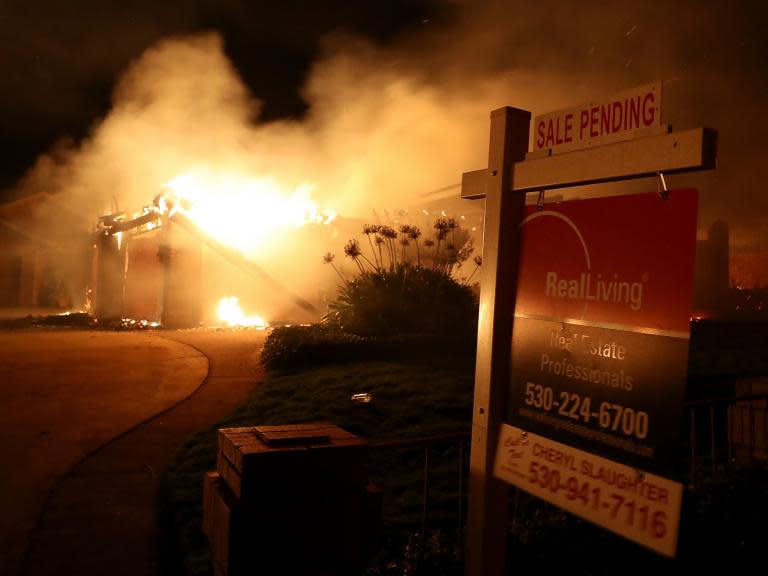 Two children, their great-grandmother and two firefighters have died in a wildfire in northern California, say officials.

Residents of Redding, a city of 92,000 about 100 miles south of the Oregon border, described a chaotic and congested getaway as the fire spread.

“I’ve never experienced something so terrifying in my life,” said Liz Williams, who loaded two children in her car and then found herself locked in bumper-to-bumper traffic with neighbours trying to retreat from Lake Redding Estates.

“I didn’t know if the fire was just going to jump out behind a bush and grab me and suck me in,” Ms Williams said. “I wanted out of here.”

The flames moved so fast that firefighters working in oven-like temperatures and bone-dry conditions had to drop efforts to battle the blaze at one point to help people escape.

Scott McLean, a spokesman for Cal Fire, the state agency responsible for fighting wildfires, said: “The fire created at least two flaming tornados that toppled trees, shook firefighting equipment and broke vehicle windows, taking down everything in its path.”

Fire officials warned that the blaze, which is believed to have been caused by a mechanical issue involving a vehicle, would probably burn deeper into urban areas before it could be contained.

Steve Hobson, a former firefighter, detailed his dramatic escape from the flames – in which he had to drive through walls of flaming embers.

Others’ homes in the path of destruction were not so lucky. Where some houses stood unscathed, single walls or chimneys were all that remained of others.

“We’re trying to move people out of the path of it because it is now deadly, and it is now moving at speeds and in ways we have not seen before in this area,” Mr Cox added.

Elsewhere in the state, large fires continued to burn outside Yosemite National Park and in the San Jacinto Mountains east of Los Angeles near Palm Springs.