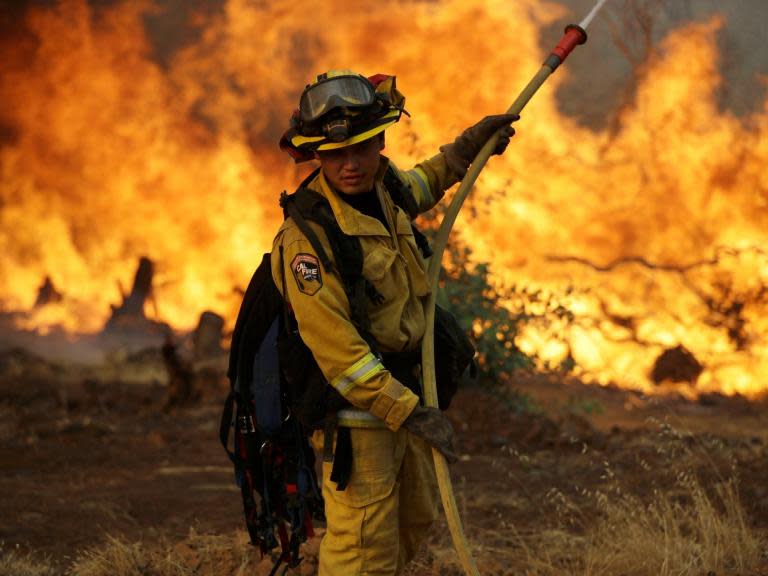 Firefighters are rushing against uncertain weather forecasts to contain a multitude of wildfires in northern California that have already claimed the lives of at least six people and forced 50,000 to flee their homes.

With hot, dry conditions and high winds fuelling the blazes, 12,000 firefighters have been drafted in to try to contain 17 wildfires that have destroyed buildings in its path – including the home of a fire chief.

As those firefighters continued to fight the blaze, families of the dead on Sunday told their harrowing tales of loss.

“My babies are dead,“ a tearful Sherry Bledsoe told reporters at the Shasta County Sheriff’s Office, where she had just learned that her two children, a five-year-old son and four-year-old daughter, and grandmother, 70-year-old Melody Bledsoe, had been killed in a fire.

Ms Bledsoe’s husband, Ed, said he had been at a store when he received a call from his son, who asked that he come get him because he feared the fire was too close. He rushed to save them, but was stopped by authorities as he tried to make it back.

“God almighty, I don’t know what I done wrong,” Mr Bledsoe told the Sacramento Bee. “I talked to them until the fire got them.”

The fires have destroyed more than 500 buildings, including homes, since the blazes started last Monday roughly 100 miles south of the border with Oregon.

Another 5,000 buildings are considered threatened by the fires which have spread over more than 90,000 acres.

The wildfires, fuelled by swift winds, have moved quickly and given residents in some areas little time to flee from the deadly blazes that engulfed buildings. All told, at least 14 people have been reported missing as the fires spread chaos in the region.

The hot and dry conditions have given firefighters little breathing room, and by Saturday the flames had spread southwest of Redding and towards Ono, Igo and Gas Point. Firefighters have indicated their primary mission is to aid in evacuation, since the inferno is moving so fast.

“We’re not getting a break with the weather,” Chris Anthony, a spokesman for Cal Fire, said. “It just continues to be really hot, really dry and we continue to get those winds. This fire’s getting so big and there are so many different parts to it.”

In response to the fires, President Donald Trump signed a declaration of emergency, which allows counties struggling to contain the fire to receive federal aid.