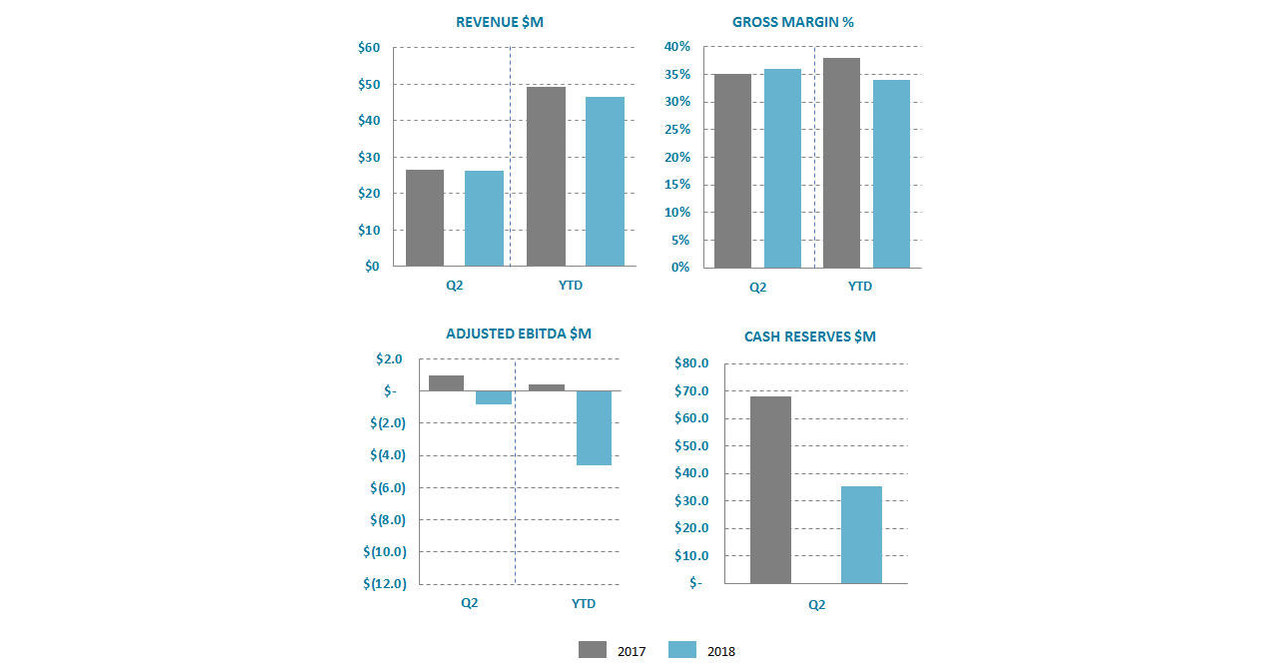 Randy MacEwen, President and CEO said, “Financial results and new contract bookings for Q2 and year-to-date are consistent with the type of first half to the year we had expected. We delivered Q2 revenue of $26.4 million, gross margin of 36% and Adjusted EBITDA of ($0.8) million. We are excited to have ended the quarter with a record Order Backlog of $283.3 million.”

Mr. MacEwen also noted, “The global megatrend of electrification of propulsion systems is accelerating. This megatrend is driving growing interest in fuel cell electric vehicles, or FCEVs, for transportation applications where long range, rapid refueling, heavy payload and route flexibility are customer requirements. Interest and customer engagement continues to build in heavy-duty motive applications, including bus, truck, rail and marine, along with automotive, material handling and unmanned vehicle applications. During Q2, we were particularly excited with the long-term extension, through to August 2022, of our HyMotion program with AUDI AG, in support of its automotive fuel cell strategy and deployment plans.”

Mr. MacEwen concluded, “As we look out to 2019 and beyond, and to our pathway to profitability, we expect strong growth in FCEV demonstration programs and commercial scaling in certain heavy and medium duty applications in China, Europe and the United States. With continued investment in technology, products, customer engagement and our brand, we see Ballard having a leading position in these large and growing addressable markets.”

(all comparisons are to Q2 2017 unless otherwise noted)

For a more detailed discussion of Ballard Power Systems’ second quarter 2018 results, please see the company’s financial statements and management’s discussion & analysis, which are available at www.ballard.com/investors, www.sedar.com and www.sec.gov/edgar.shtml.

Ballard will hold a conference call on Thursday, August 2, 2018 at 8:00 a.m. Pacific Time (11:00 a.m. Eastern Time) to review second quarter 2018 operating results. The live call can be accessed by dialing +1.604.638.5340. Alternatively, a live audio and slide webcast can be accessed through a link on Ballard’s homepage (www.ballard.com). Following the call, the audio webcast and presentation materials will be archived in the Earnings, Interviews & Presentations area of the Investors section of Ballard’s website (www.ballard.com/investors).

This release contains forward-looking statements concerning projected revenue growth, product shipments, gross margin, Adjusted EBITDA, cash operating expenses and product sales. These forward-looking statements reflect Ballard’s current expectations as contemplated under section 27A of the Securities Act of 1933, as amended, and Section 21E of the Securities Exchange Act of 1934, as amended. Any such statements are based on Ballard’s assumptions relating to its financial forecasts and expectations regarding its product development efforts, manufacturing capacity, and market demand. For a detailed discussion of the factors and assumptions that these statements are based upon, and factors that could cause our actual results or outcomes to differ materially, please refer to Ballard’s most recent management discussion & analysis. Other risks and uncertainties that may cause Ballard’s actual results to be materially different include general economic and regulatory changes, detrimental reliance on third parties, successfully achieving our business plans and achieving and sustaining profitability. For a detailed discussion of these and other risk factors that could affect Ballard’s future performance, please refer to Ballard’s most recent Annual Information Form. These forward-looking statements are provided to enable external stakeholders to understand Ballard’s expectations as at the date of this release and may not be appropriate for other purposes. Readers should not place undue reliance on these statements and Ballard assumes no obligation to update or release any revisions to them, other than as required under applicable legislation.