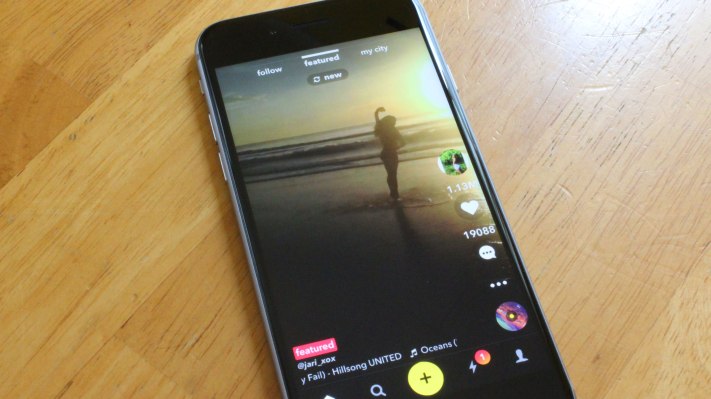 Musical.ly, the short video app that’s popular among teens and young people, is going away. Kinda.

The app and all user data and accounts is being merged with Toktok, a sister app that’s owned by ByteDance, the Chinese company that acquired Musical.ly for around $1 billion last year.

The switch-over happens today (Thursday) and it should be relatively seamless. Users of Musical.ly will see their app switch to TikTok once they update the app, and they should find their account, videos and personal settings inside the new app as per usual.

One notable new addition is a setting that alerts a user when they have been active in the app for two hours that day. Its addition comes just a day after Facebook added similar ‘well-being’ features to its core social network and Instagram.

ByteDance is making the move to consolidate its audiences on both apps. Four-year-old Musical.ly, which is particularly popular in the U.S., has around 100 million users while TikTok, which was created in 2016 and operates worldwide minus China, claims 500 million monthly active users. In China, the sister product is Douyin, while the company also offers news apps Toutiao in China and TopBuzz across the rest of the world.

“TikTok, the sound of a ticking clock, represents the short nature of the video platform. We want to capture the world’s creativity and knowledge under this new name and remind everyone to treasure every precious life moment. Combining musical.ly and TikTok is a natural fit given the shared mission of both experiences,” said Alex Zhu, co-founder of Musical.ly and Senior Vice President of TikTok, in a statement.

The app merger follows the closure of Musical.ly’s standalone live-streaming app Live.ly in June. That was part of the deal agreed to for the Musical.ly acquisition, and the company directed its users to Live.me, an app that counts ByteDance among its investors.

It makes sense that ByteDance is consolidating its sibling apps since Facebook is stalking out the short video space. The social network giant has tested a Musical.ly style app and just this week we found hints that it is planning to launch “Talent Show,” which would allow users to compete by singing popular songs then submitting their audition for review.

There’s also the revenue side. A global platform plays better for advertisers rather than forcing them to pick either Musical.ly or TikTok, or going through the added rigmarole of working on both.