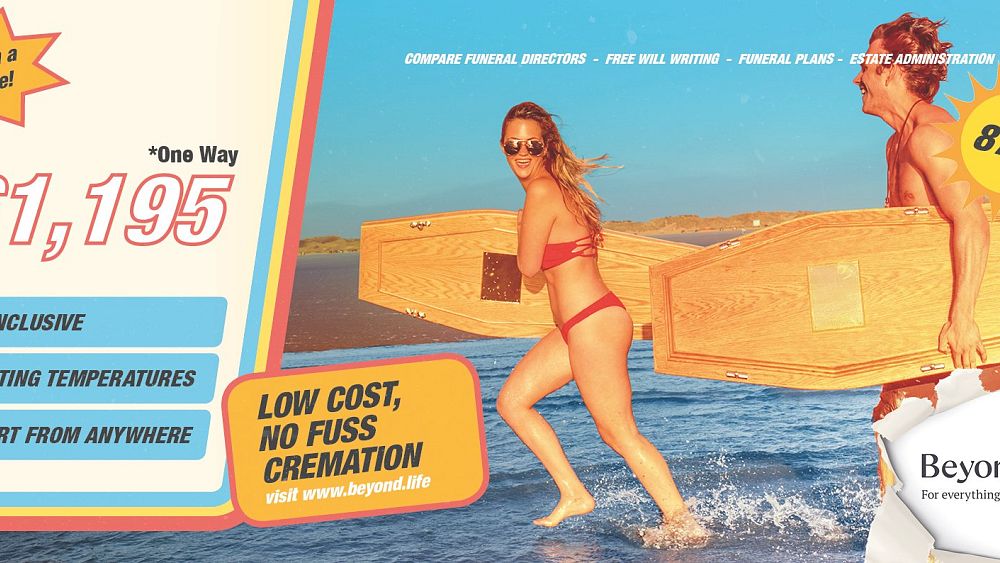 A price-comparison company specialising in comparing funerals has received a lot of attention online after it launched a unique advertising campaign.
The UK-based company, Beyond, released several posters that appear fairly ordinary at first glance. But on looking closer, things do not appear as they seem.

The following poster was one of several used in the campaign, and shows a couple running along the beach with coffin-shaped surboards, advertising “low cost, no fuss cremations”. priced at £1,195 (€1,345) for an “all inclusive”, one-way trip with “roasting temperatures”.

Another ad resembled a car sales advert, except it features low-cost coffins and advises customers to not get “RIP’d off”.

Campaign sparks reactions on and offline

Transport for London, banned the posters from being displayed on the London Underground, “but it’s up now around [other parts of] London”, the company assured customers.

In response to the ban, Beyond said the campaign was aiming to “open up the conversation around death”.

“It’s our shared reluctance to talk about death that creates an environment where we can be ripped off by predatory firms.”

Many social media users shared this sentiment and congratulated the company for opening the debate on tackling taboo subjects with humour, or suggested this satirical approach could eventually change the way the entire industry operates.

However, other social media users were less than impressed by the campaign, saying it was in poor taste or unnecessary.

Not everything needs a comparison website, another person said.

What do you think? Are these adverts in poor taste? Or is it important to use humour to get people talking more openly about subjects that are traditionally considered taboo? We want to hear your thoughts.