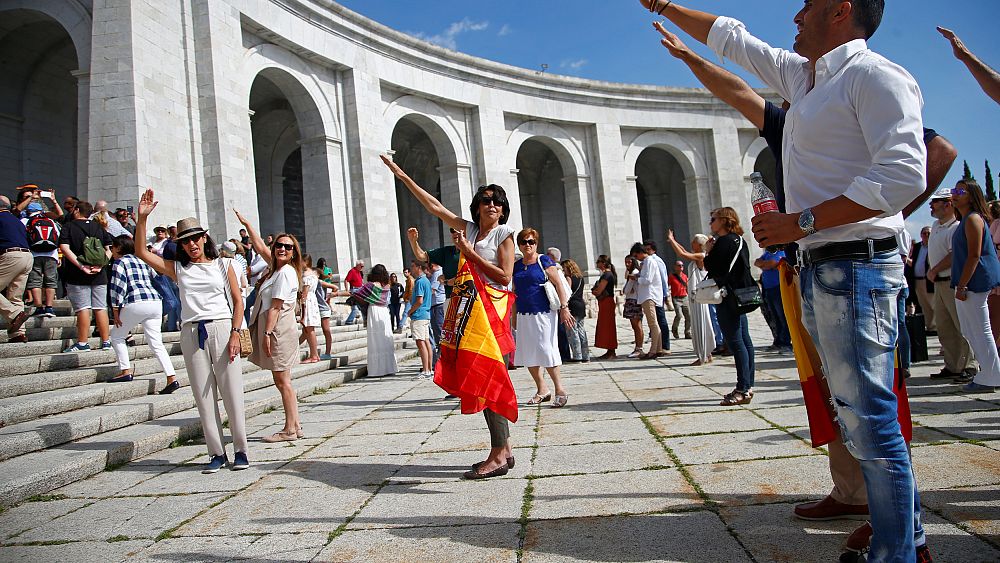 More than 180 retired, high-ranking army officials in Spain have published a manifesto demanding respect for Francisco Franco following plans to exhume the dictator’s remains.
In the manifesto, they denounced the “infamous campaign” that is being carried out by the “political left” to discredit the dictator.

The document was sent to the Socialist government and published on the website of a controversial military body.

The signatories include a former admiral, 29 generals, 105 colonels, 15 lieutenants, as well as commanders and captains of the navy.

Spain’s socialist prime minister, Pedro Sánchez, is vying to exhume the remains of the dictator from the country’s biggest fascist-era monument, which has triggered outrage and protest by pro-Franco groups.

After the country’s three-year civil war that ended in 1939, Franco held the nation under his dictatorship for almost four decades. But even after his death, the debate over what to do with the remains of Franco divides Spain to this day.

The Valley of the Fallen on the outskirts of Madrid is Spain’s largest mass grave and is dedicated to the memory of those killed in the civil war.

There are around 34,000 remains identified at the site, but only the tombs of the far-right leaders Franco and José Antonio Primo de Rivera are marked.

It was built by a number of political prisoners under forced labour and inaugurated in 1959. Back then, the Franco regime portrayed the monument as a site of reconciliation, which represented the national catholic ideology championed by the dictator. Today, it is a tourist attraction as well as a shrine for right-wing pilgrims and Franco supporters.

Divisions between the left and right

Prime Minister Sánchez, a socialist, seized the presidency from the conservative leader Mariano Rajoy just two months ago amid a corruption scandal.

His Party (PSOE) believes the removal of Franco’s remains from the site would be a major step towards the reconciliation of Spain’s painful past. Sánchez has also tried to outlaw pro-Franco groups.

“A country that looks to its future needs to be at peace with its past,” Sánchez told parliament in June. “Wounds have remained open for many years, too many, and it’s time to heal them. Our democracy will have symbols that unite citizens, not ones that separate them.”

While other left-wing and regional nationalist politicians support the move, it has received criticism from the right.

Rajoy’s Popular Party replacement, Pablo Casado, has said he would not spend a single euro on unearthing Franco and has accused Sánchez of “proposing unnecessary issues, only to obtain electoral gains, with the risk of gravely fracturing society”.

For now, Sánchez’s gamble to dig up the past appears to have paid off. An opinion poll released on Thursday showed if the election was held today, the Socialist party would easily win with 29.9% of the vote, while the conservatives would poll with 20.4%.

The leader will have to wait another two years to find that out, when elections are held in July 2020.