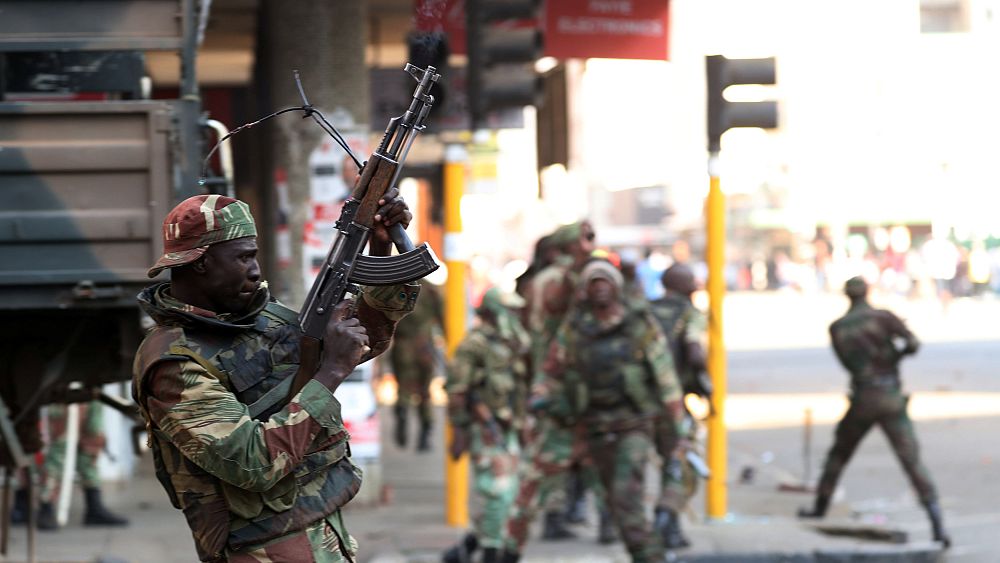 Supporters of Zimbabwe’s opposition flooded the streets of the capital Harare last night in a protest against early election results, suggesting the ruling Zanu PF party had taken the lead.
The opposition has accused Zanu PF of rigging the elections.

Three people were killed after soldiers opened fire on the protesters in a move wideley condemned by the international community.

Amnesty International’s Acting Secretary General Colm Ó Cuanacháin called for an immediate investigation into the killings, saying “by using live ammunition against unarmed protesters, the army has broken the very same rule of law that they should protect.”

Job Wiwa Sikhala, a long-time critic of ousted president Robert Mugabe, posted to Facebook late into the night saying he could hear gunshots at his house.

The post has since received many comments asking for updates on Sikhala’s wellbeing, but, at the time of writing, Sikhala is yet to respond.

Euronews has also reached out to Sikhala.

The Zanu PF party tweeted on behalf of Zimbabwean President Emmerson Mnangagwa, blaming the opposition party, MDC Alliance, for the overnight violence, before Mnangagwa himself tweeted, urging for peace.

However, these messages were rejected by other high-profile social media users. UK-based Zimbabwean lawyer Alex T Magaisa said “only the president has the power to deploy the army.”

“He should be condemning the excessive use of force against civilians,” he wrote.

Despite the ongoing dispute between politicians over who is responsible for last night’s violence, many ordinary Zimbabwean social media users have expressed similar sentiments between themselves, regardless of political affiliation.

Nomaliso Musasiwa, a Facebook user in Harare, said yesterday was a “sad day for me as a Zimbabwean.”

“Everyone one of our leaders is guilty for not preventing what happened today. All what was needed was to literally choose the people over show of power.”

Another Harare-based Facebook user, Muneer Walele, said that regardless of whom voted for whom, arguing the election results was ultimately not worth the risk to human life.

“Sadly, the politicians never die,” she wrote. “They will ask you to defend your vote unarmed while they move with security. They are probably discussing today’s events over blue label whiskey at some posh hotel. Contrast this with the poor families waiting for an order to bury their loved ones.”