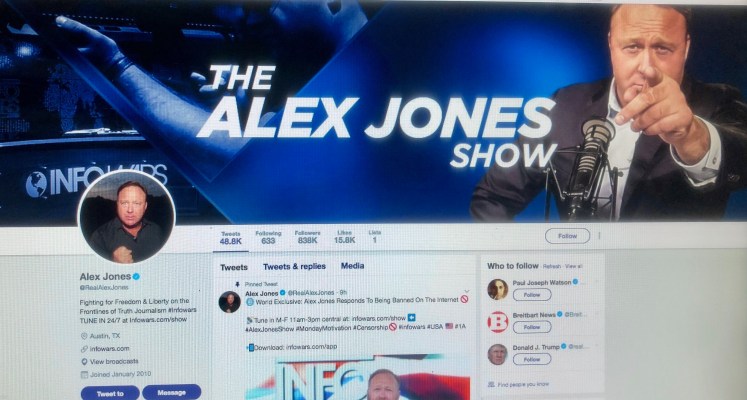 It’s easy to dismiss YouPorn’s ban as a publicity grab, but it underscores the fact that Twitter’s lack of action is became increasingly notable, even though last December it said it would take a harder stance against hate speech. Alex Jones’ verified Twitter profile, with 838,000 followers, is still up, with one of his recent tweets complaining about “being banned on the Internet.”

For those that need a refresher, Alex Jones frequently broadcasts hate speech and played a major role in propagating some of the most harmful conspiracy theories in recent years, including PIzzagate and the debunked claim that vaccines cause autism. His support of theories that the Sandy Hook and Parkland shootings were faked resulted in harassment against the families of victims (Jones is currently trying to get a defamation lawsuit brought against him by some Sandy Hook parents dismissed).

Twitter has promised to do a better job of protecting users, but a lot of its actions come across as more hemming and hawing while real damage is being done through its platform (for example, President Donald Trump retweeting Islamophobic posts from the deputy leader of hate group Britain First’s account, which Twitter only suspended three weeks later despite massive uproar and concern that it would trigger more violence and harassment against Muslims).

Iran's military knew it accidentally shot down a passenger plane moments after it happened, and a stunning new report details how it was covered up — even from Iran's president
2020-01-27