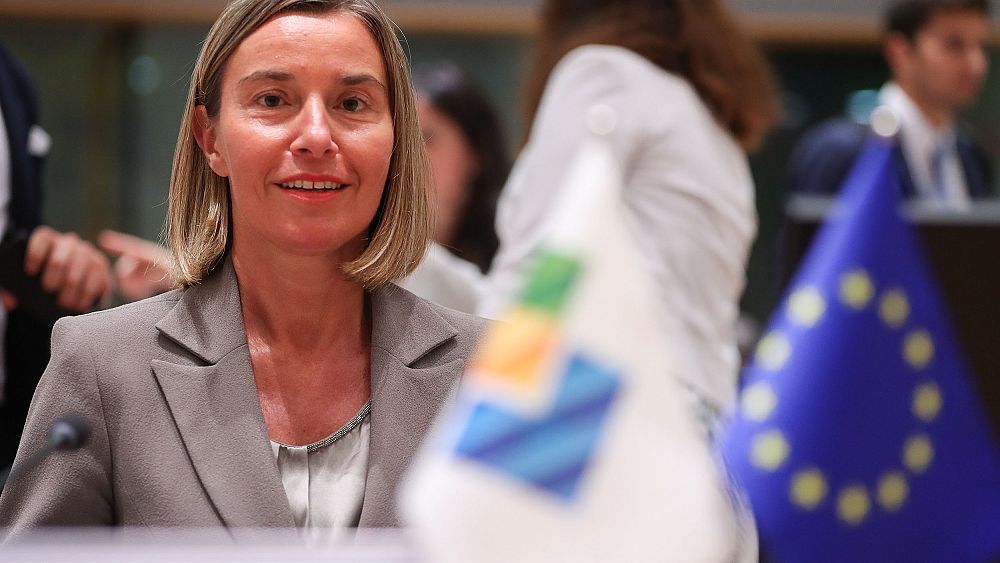 LONDON — European firms that stop doing business with Iran due to reimposed U.S. sanctions could in turn sanctioned by the E.U., a special adviser to the 28-country bloc’s top diplomat has warned.”If E.U. companies abide by U.S. secondary sanctions they will, in turn, be sanctioned by the E.U.,” Nathalie Tocci, a aide to E.U. foreign policy chief Federica Mogherini told Britain’s BBC Radio 4 on Monday night.
Smart Facts

She characterized the measures as an attempt to “protect European companies.”Tocci said the move was “necessary in order to signal, diplomatically, to the Iranians that Europeans are serious” about trying to salvage the Iran nuclear deal.Hours earlier, the U.S. announced it was reintroducing sanctions on the Islamic republic.

The Trump administration’s decision to walk away from the landmark 2015 Iran pact signed by the five permanent members of the U.N. Security Council — the U.S., Russia, France, China and the U.K. — as well as Germany and the European Union, dismayed and angered longtime U.S. allies and vital trading partners.German Chancellor Angela Merkel, French leader Emmanuel Macron and British Foreign Secretary Boris Johnson traveled to the U.S. aiming to convince President Donald Trump not to ditch the deal, saying it was working and the only way to halt a regional arms race.Nevertheless, Trump went ahead and announced on May 8 the U.S. was withdrawing from what he called the “decaying and rotten” agreement.Mogherini told reporters Tuesday that the E.U. was doing its “best to keep Iran in the deal, to keep Iran benefiting from the economic benefits that the agreement brings to the people of Iran.”

Tocci, the adviser, conceded potential E.U. sanctions as part of the the so-called blocking statute which came into effect on Tuesday were “politically and symbolically” an important step to take. However, it was unclear what, how and if they would be enforced.In 2016, the European Union exported more than 8.2 billion euros ($9.7 billion) worth of goods to Iran, while importing almost 5.5 billion euros ($6.5 billion) from there, according to the European Commission. This is dwarfed by the $1.1 trillion the EU-U.S. trade represented in the same year.Virtually all multinational firms do business or banking in the U.S., leaving European companies vulnerable to American sanctions punishing those operating in and with Iran.Trump doubled down on his stance on Iran early Tuesday.

At midnight Monday, the U.S. began targeting oil-rich Iran’s automotive industry, civil aviation sector, as well as trade of gold and other metals are the first in a set of punitive measures had been eased under Trump’s predecessor Barack Obama.Trump has called for a wholesale overhaul of Iranian regional policies, such as an end to its military support for the Syrian government and regional militant groups like Lebanon’s Hezbollah. The 2015 pact did not curb these actions, one reason Trump has called the agreement “the worst deal ever.”

International inspectors say Iran has been complying with the deal to curtail its nuclear program.The U.S. is preparing to reimpose the remainder of U.S. sanctions lifted as part of the agreement, and target Iran’s oil sector and central bank in early November.America has also pressured allies to stop importing oil from Iran before the November deadline. Top buyers of Iranian oil include China, India, Turkey and South Korea.The effects on Iran of Washington’s hardening stance have been stark, with Iran’s rial currency losing two-thirds of its value in six months.Within hours of the White House announcement, international firms announced steps to avoid U.S. sanctions.On Tuesday, German car manufacturing giant Daimler said it had suspended its activities in Iran.”We will continue to closely monitor the political developments, especially in connection with the future of the nuclear agreement,” the company said in a statement.Daimler’s announcement came after U.S. Ambassador to Germany Richard Grenell in May warned that firms that continued to do business in Iran would face consequences.World news

“U.S. sanctions will target critical sectors of Iran’s economy. German companies doing business in Iran should wind down operations immediately,” he tweeted.In June, auto manufacturer PSA — which makes Peugeot vehicles — began taking steps to suspend its joint-venture activities in Iran while rival Renault has said it will adhere to the U.S. sanctions.French oil giant Total has said it would quit a multibillion-dollar gas project if it cannot secure a waiver from the sanctions — a request the French government says had been rejected.F. Brinley Bruton reported from London, and Andy Eckardt and Carlo Angerer from Mainz, Germany.