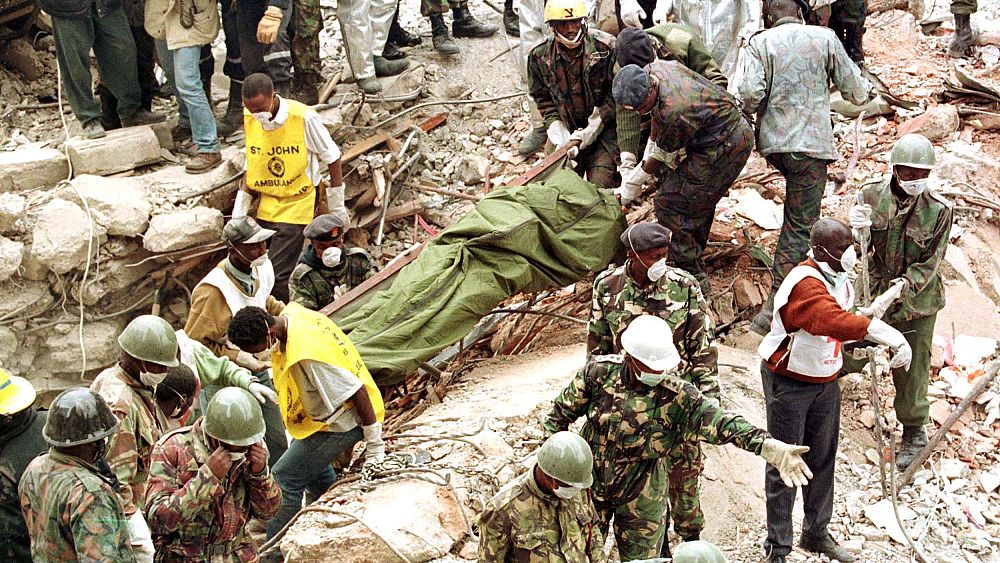 WASHINGTON — Twenty years ago Tuesday, on Aug. 7th, 1998, suicide bombers drove their pick-up trucks to the gates of the U.S. embassies in the capitals of Kenya and Tanzania. What no one knew then — in part because many Americans were paying closer attention to a president’s personal scandal — was that the bombers were ushering in a new era of terror that would culminate in the 9/11 attacks.

Within minutes, deadly explosions of thousands of pounds of TNT reduced much of the interiors of the buildings to rubble, killing 224 people, and wounding thousands more. Among the 12 Americans killed was the first CIA victim known to have been killed by al-Qaida, Molly Hardy, 51, a regional finance officer in Nairobi.

In Washington, President Bill Clinton vowed to “use all the means at our disposal to bring those responsible to justice, no matter what or how long it takes.”

The attacks set off a chain of events, including retaliation from a beleaguered U.S. president who was juggling meetings with his national security team, even as he met with personal lawyers to prepare his testimony in response to an independent counsel’s grand jury subpoena in the Monica Lewinsky affair.

And within six months, Osama bin Laden had ordered his top operative, Khalid Sheikh Mohammed, to start planning the attacks on New York and Washington that would take place on 9/11, three years later. The CIA recently called the embassy bombings, and their aftermath, a watershed event in Al Qaeda’s planning for 9/11.

On Tuesday morning, the State Department will commemorate the bombings at a ceremony at its memorial wall.

Hours after the explosions, on NBC Nightly News that night 20 years ago, we reported that Bin Laden was among the most likely suspects for the bombings: he had motive (a hatred of America), means (hundreds of millions of dollars), and the operational ability to stage simultaneous attacks in the capitals of countries 418 miles apart.

He had already been secretly indicted in the U.S. for the 1993 bombing of the World Trade Center, which killed six people and injured scores more, and was, in retrospect, a trial run for 9/11. And since 1997, according to the 9/11 Commission Report, the CIA had suspected Bin Laden of sending operatives to Somalia to strike U.S. forces in the 1993 shoot-down known as “Black Hawk Down.”

What is truly compelling about the narrative of the 1998 terror attacks, however, is the extraordinary confluence of events occurring in the White House in the aftermath of the bombings. Bill Clinton, under siege by Independent Counsel Ken Starr, was simultaneously preparing to testify to the grand jury about his affairs, even as he assessed the intelligence regarding who was responsible for the terror attacks, and how best to retaliate.

Clinton seemed able to compartmentalize those separate tracks, according to all reports, despite some critics who later accused him of a “Wag the Dog” strategy, as in the 1997 Dustin Hoffman-Robert De Niro film about Hollywood spin doctors who fabricate a war to cover up a presidential sex scandal.

His political and legal advisors later said they were completely walled off from the tightly-held national security deliberations. According to multiple accounts, on Aug. 12, Clinton held a meeting in the Situation Room to review the intelligence and possible military options. The next day, he was seen weeping silently at a solemn ceremony to receive the bodies of the embassy victims at Andrews Air Force base.

The following Monday, he spent two hours with his attorneys preparing for the grand jury testimony at the White House later that day. He then went to the White House Solarium to meet with his National Security Adviser, Sandy Berger, to discuss plans for the retaliatory strike and other issues.

Then he walked to the White House Map Room to meet with the prosecutors for more than four hours on closed-circuit television to the grand jurors, who were sitting at the federal courthouse blocks away.

At 10 p.m. that evening, the president addressed the nation for four minutes, admitting to what he called an “inappropriate relationship” with Monica Lewinsky, but saying he had given “legally accurate answers” in his testimony and at no time asked anyone to “lie, hide, or destroy evidence, or take any unlawful actions.”

But it was his fateful testimony that day that Independent Counsel Ken Starr later used weeks later in his report to Congress to provide grounds for the House Judiciary Committee to impeach the president, on a party line vote, on charges of perjury and obstruction of justice. (He was, of course, later acquitted by the Senate.)

The next day, in an iconic image, the embattled president and first lady Hillary Clinton left for the solitude of Martha’s Vineyard, strolling slowly across the South Lawn to board Marine One, with a young Chelsea Clinton walking between her parents as a buffer, holding each by the hand.

A day later, Clinton celebrated his 52nd birthday, in what could only have been a difficult dinner joined only by longtime friends, Ann and Vernon Jordan.

At 1:30 a.m., he called CIA Director George Tenet for a final check on the intelligence. At 3 a.m. he called Berger to launch twin strikes: 60 Tomahawk Cruise missiles against a suspected al-Qaeda gathering of key terrorist leaders in Afghanistan, and another 20 missiles against a pharmaceutical plant in Sudan thought to be producing a key ingredient for deadly VX nerve agent.

The president reported to the nation later that day: “Our target was terror.” As it turned out, the target in Sudan was later discovered not to be a weapons plant at all. And bin Laden was elsewhere in Afghanistan when his training camps were struck. In a radio message, the al-Qaeda leader crowed, “By the grace of Allah, I am alive.” His spokesman released a statement saying: “The battle has not started yet. Our answer will be deeds, not words.”

Two years later, on Oct. 12, 2000, the bin Laden organization attacked a guided missile destroyer, the U.S.S. Cole, killing 17 service members during a refueling stop in Yemen. It is widely believed to have foreshadowed al Qaeda’s worst attack on America, less than one year later, on Sept. 11, 2001.