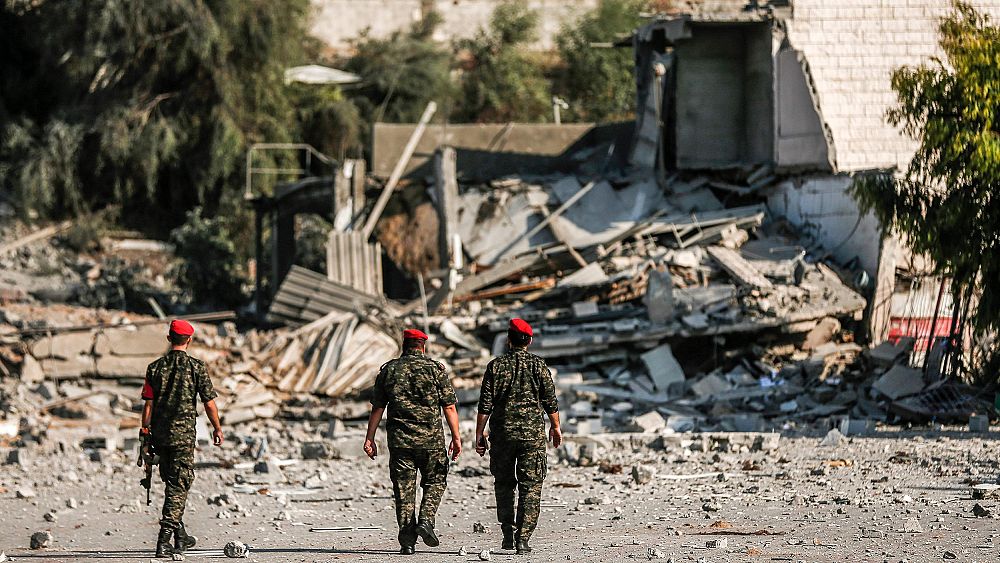 The Islamist group Hamas has reportedly said that a cease-fire has been reached to end the latest round of fighting with Israel.
Hamas’ Al-Aqsa TV channel reported late Thursday local time that a cease-fire has taken hold “on the basis of mutual calm,” according to The Associated Press. It said the deal was mediated by Egypt and other regional players.

A senior Hamas official, speaking on condition of anonymity because he was not authorized to speak to the media, said the deal would formally go into effect at midnight (5 p.m. Thursday ET), according to the AP. A person in Gaza said early Friday it was quiet there since midnight, with no apparent Israeli jets in the sky.

The announcement comes after a new round of strikes carried out by the Israeli Defense Forces, which said it targeted 150 military targets in response to 180 rocket launches from Gaza at Israeli territory. The Israeli military said that 30 launches were intercepted by that country’s “Iron Dome” defense system.

The newspaper Haaretz reportedthat 11 people were wounded in the town of Sderot after six rockets were fired from Gaza.

Four Palestinians, including an unborn child, were killed in Israeli strikes in Gaza, according to Palestinian Health Ministry officials. One person, Ali Algandor, 30, was killed on Wednesday, and overnight a house was struck and a 22-year-old pregnant woman was killed along with her 1-year-old daughter, Palestinian Health Ministry officials said. The woman’s husband was injured and was said to be in critical condition.

Twelve Palestinians were lightly wounded in previous strikes, and another 18 were wounded when what Palestinians said was a cultural center was hit by an Israeli airstrike, Palestinian health ministry officials said. The IDF said the building was being used by Hamas for military purposes.

Israeli officials said that one woman was seriously injured in a rocket attack in Israel, and 20 other people have also been wounded, although some of those people were admitted for shock.

The violence, and talk of a cease-fire, began around July 20 after officials said gunmen killed an Israeli soldier near the border, which prompted Israeli strikes by warplanes, tanks and artillery that were said to have killed at least four Palestinians.

At the time of the death of the Israeli soldier and airstrikes, the IDF said in a statement that “Hamas chose to escalate the security situation — and will bear the consequences for its actions.”

On Tuesday, the Israeli military struck a Hamas military post in Gaza after it said militants fired on Israeli troops on the border. Hamas said two of its fighters were killed after taking part in a gunfire parade inside a militant camp.

The U.N. Special Coordinator for the Middle East Peace Processin a statement on Thursday called for calm.

“For months I have been warning that the humanitarian, security and political crisis in Gaza risks a devastating conflict that nobody wants. The UN has engaged with Egypt and all concerned parties in an unprecedented effort to avoid such a development,” Special Coordinator Nickolay Mladenov said of the situation in Gaza in the statement.

“Our collective efforts have prevented the situation from exploding until now. If the current escalation however is not contained immediately, the situation can rapidly deteriorate with devastating consequences for all people,” Mladenov said.

After a four-hour meeting of Israel’s security cabinet on Thursday the Ministerial Committee on National Security Affairs said in a statement that “the cabinet instructed the IDF to continue to act with force against terrorist elements.”

Israel’s Permanent Representative to the U.N., Danny Danon, on Twitter put the blame for the more than 180 rockets launched at Israel on Hamas, and said the rockets were “aimed at innocent civilians.”

“We will continue to defend our citizens against terror rockets as any other state would,” he said.

Weekly clashes at the Israel-Gaza border have kept tensions high for months. Since March 30, more than 150 Palestinians have been killed, according to the Palestinian Health Ministry.

The protests are partly meant to draw attention to the Israeli-Egyptian blockade imposed after Hamas took control of Gaza in 2007.

After the violence in July, a spokesman for Hamas told Reuters that a cease-fire had been reached.

A Palestinian rocket struck the southern city of Beersheba late in the afternoon, landing in an open area. It was the first time a rocket had hit the city since the 2014 war.