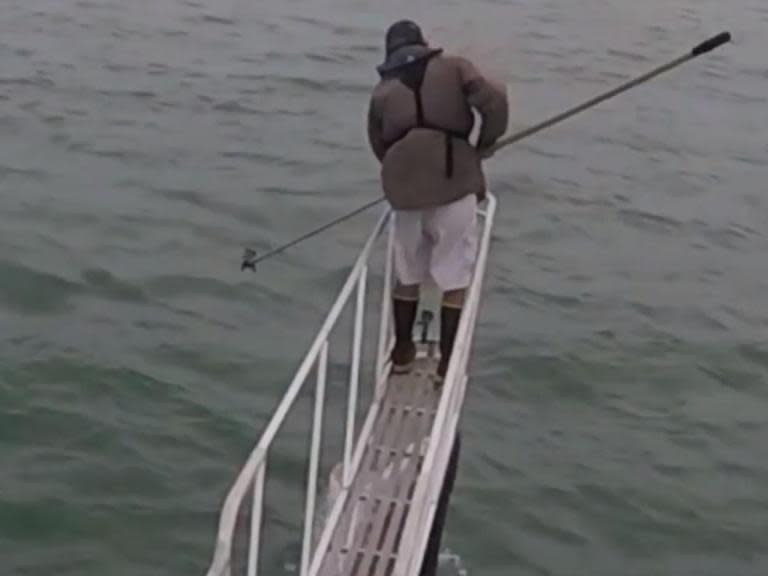 A great white shark has been caught on camera leaping out of the sea beneath a researcher and lunging at him with its teeth bared.

Greg Skomal was standing on the bow of a research boat off Cape Cod, near Boston, when the predator breached the water.

He was using a long pole with an action camcorder attached to capture footage of the shark.

Footage of the fish jumping out of the ocean was shared by the Atlantic White Shark Conservancy.

“While out on research trips, we’ve seen white sharks breach and we’ve received multiple reports of breaching white sharks this year from fishermen and boaters. While encounters like this one are rare, this video shows that they’re certainly possible,” the conservancy said.

“White sharks are wild and unpredictable animals. This is a good reminder of the importance of not becoming complacent and always staying vigilant when in or on the water.”

Mr Skomal, senior biologist at the state Division of Marine Fisheries, told the Boston Globe: “Out of nowhere, I look down and I see the gaping mouth of a white shark looking right up at me, literally within a couple feet of the pulpit.

“It was extremely exciting, that’s for sure.”

He told the paper he had two hypotheses for why the great white acted the way it did.

“There’s an old expression called fight or flight. Perhaps bearing its teeth and jumping up was a way of protecting itself before it took off,” he said. “Part of me believes that’s what happened.”

But he had another explanation: “It was in hunting mode.

“It interpreted me, my reflection, my shadow, my image – whatever it was – through the water’s surface as a potential prey item, and it lunged at me.”

He added: “To be honest, I would like to think it wasn’t trying to eat me.

“Nobody really wants to be eaten.”

Great white sharks are listed as a vulnerable species by the International Union for the Conservation of Nature. They are also protected by national governments in the US, New Zealand and Australia.

Their numbers have fallen sharply in recent decades as a result of overfishing, with the sharks accidentally being caught up in nets and discarded fishing gear.