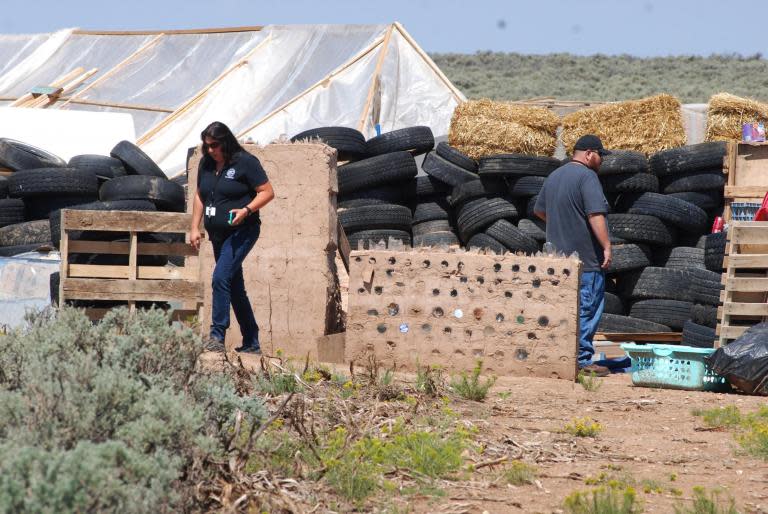 A child who was among a group of youngsters being held inside a rural New Mexico compound, said they were being trained by their captors to conduct school shootings.

Five suspects were arrested after police found 11 starving children between the ages of one and 15 inside a makeshift structure with a nearby shooting range. One of the children’s foster parents told prosecutors “the defendant had trained the child in the use of an assault rifle in preparation for future school shootings”, according to court filings.

In a news release, the sheriff said police intercepted a message from someone within the Amalia, New Mexico, compound saying “we are staving and need food and water”, causing the authorities to raid the site last week.

“I absolutely knew that we couldn’t wait on another agency to step up and we had to go check this out as soon as possible,” he said. “So I began working on a search warrant right after I got that intercepted message — it had to be a search warrant and a tactical approach for our own safety because we had learned the occupants were most likely heavily armed and considered extremist of the Muslim belief.”

The five suspects — who are all held in jail without bail —include Siraj Wahhaj, his two sisters Hujrah Wahhaj and Subhannah Wahhaj, as well as Lucas Morten and Jany Leveille. Several of the women are thought to be some of the children’s mothers, if not all.

Tyler Anderson, a 41-year-old mechanic who lived near the compound, told the Associated Press he helped the group instal solar panelling on the site.

“We just figured they were doing what we were doing, getting a piece of land and getting off the grid,” Mr Anderson said.

Mr Wahhaj’s son, Abdul-Ghani Wahhaj, was reported missing by his mother in November 2017. Authorities later ordered a warrant for his arrest after he failed to tell his wife where he had taken their child.

“My husband said he was taking Abdul-Ghani to the park, and didn’t come back,” Hakima Ramzi told CNN. “When I would ask him where he was, he said he was on his way, he was coming soon, he was just keeping him for the night. But I haven’t seen him since then.”

Police found the body of a dead child inside the compound, though it remained unclear as of Thursday whether it was that of the missing four-year-old boy. The site was squalid, lacking plumbing and electricity, and loaded firearms were located near the shooting range.

Prosecutors urged the suspects remain jailed during court proceedings due to their “planning and preparation for future school shootings”. Other information surrounding the training children allegedly received in the compound wasn’t yet provided.

All five suspects have pleaded not guilty, and are expected to attend a pretrial detention hearing on Monday.

Now, questions are arising as to why police did not investigate the compound sooner. Tanya and Jason Badger, a couple who owned the property where the makeshift site was built, told reporters they repeatedly attempted to kick the group off their land.

“We had told them several times that you know they’re not tenants, they’re not paying this rent, they’re squatters, they’re there illegally, I don’t want them there,” Mr Badger told CNN.