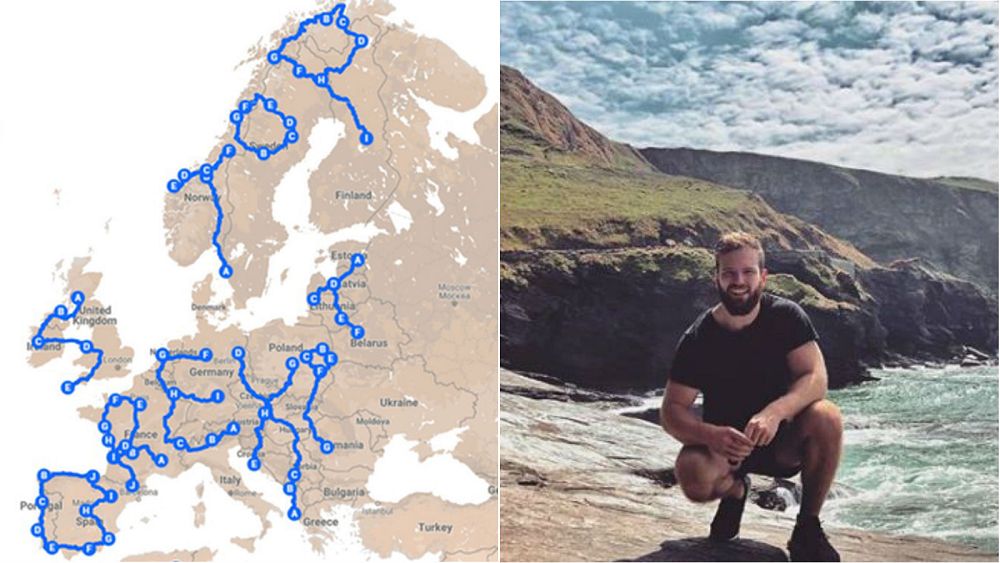 He’s the Englishman travelling 30,000 km around Europe to scrawl “Stop Brexit” over a map of the continent.
Andy Pardy from Exeter says his epic trip is about making the most of freedom of movement during what’s expected to be Britain’s last summer in the European Union.

The 28-year-old quit his job and set off in a van last month.

He designed the trip so that satellite tracking software recording his movements would write out the desired words.

“I came up with the idea whilst running and using one of the tracking apps.

“I thought I might be able to do something on a bigger scale.

“Like a lot of my friends at home I’ve been frustrated with the debate and how Brexit has been progressing.

“I wanted to do something positive and make a personal statement at the same time.”

Pardy is currently in Finland — as of Friday afternoon — and has already written the first three letters of his phrase.

He is set to finish the 32-country challenge in Spain in late October.

“Having spent time growing up in Germany, and working in Spain, I’ve always valued freedom of movement,” he told Euronews.

“The right to explore as well as live and work in Europe without tiresome red tape is an immense privilege and, although we don’t yet know to what extent this might be affected, I wanted to highlight some of the benefits as they stand.”

“The journey has been incredible so far, I’ve met loads of wonderful people along the way, all of whom have been supportive.

“I’ve also received offers from kind individuals across the continent who’ve read about the trip and have invited me to come and stay with them. Thank you to you all!

“Scandinavia, where I have spent the majority of my time so far, has been beautiful. I appreciate how fortunate I have been to be able to do this.”

**Your view | What do you think of his road trip? Have you heard of a better idea? Let me know: chris.harris@euronews.com