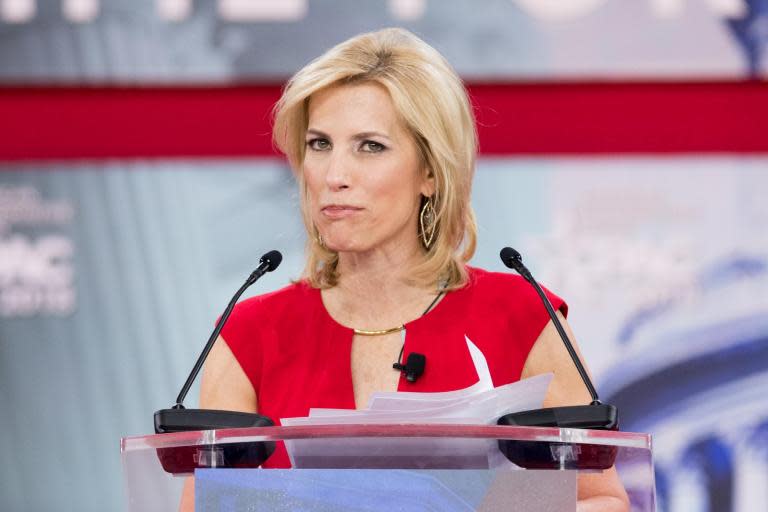 Fox News host Laura Ingraham has defended statements she made during a show this week in which she attacked legal and illegal immigration in America.

The conservative said white nationalists — and, specifically, “one racist freak” — were “distorting” her comments.

“A message to those who are distorting my views, including all white nationalists and especially one racist freak whose name I won’t even mention. You do not have my support. You don’t represent my views and you are antithetical to the beliefs I hold dear,” she said on Thursday night’s episode of The Ingraham Angle. “Despite what some may be contending, I made explicitly clear that my commentary had nothing to do with race or ethnicity. But rather a shared goal of keeping America safe and her citizens safe and prosperous.”

Ms Ingraham sparked controversy on Wednesday night when she criticised the immigration for spurring “massive demographic changes” that “none of us ever voted for, and most of us don’t like”.

“In some parts of the country, it does seem like the America that we know and love doesn’t exist anymore,” she said. “From Virginia to California, we see stark examples of how radically, in some ways, the country has changed.”

“Now, much of this is related to both illegal, and in some cases legal immigration that, of course, progressives love,” she added.

The comments sparked backlash online, with Twitter users calling the host a “bigot” and — once again — threatening to boycott her Fox News show.

Laura Ingraham has been a bigot since college. She was literally disciplined for targeting and harassing people as a college student. She’s a lifelong bigot.

“Laura Ingraham complained bitterly about America’s ‘changing demographics,’ and now says she was just referring to secure borders, not race or ethnicity… you know, what ‘demographics’ means,” one Twitter user wrote. “If you’re a company still advertising on her show, I have no idea what you’re thinking.”

Laura Ingraham complained bitterly about America’s “changing demographics,” and now says she was just referring to secure borders, not race or ethnicity… you know, what “demographics” means. If you’re a company still advertising on her show, I have no idea what you’re thinking.

None of us woke up and had to be Laura Ingraham.

It’s far from Ms Ingraham’s first time stirring controversy over her actions — The Ingraham Angle suffered a massive loss of advertisers after she mocked a school shooting survivor for not getting into his top universities.

She also sparked outcry after appearing to hail Donald Trump using the Nazi salute at the 2016 Republican National Convention.

On Thursday night, it was Ms Ingraham’s turn to disavow white supremacy, claiming her comments had nothing to do with race.

The host appeared to be rejecting the support of Ku Klux Klan leader David Duke when referring to the “racist freak whose name I won’t even mention.”

Mr Duke hailed Ms Ingraham’s previous comments on Twitter, describing the rant as “one of the most important (truthful) monologues in the history of [mainstream media] MSM”.

However, Ms Ingraham said it was white nationalists like Mr Duke who were taking her comments out of context.

“As I have said repeatedly on the show, merit-based immigration does wonders for our country’s economy, our way of life, and how we define our country. I even said that in my opening thoughts last night,” she said. “I want to make it really clear that my concern will continue to remain with the families who have suffered the tragic result of illegal immigration. The children put in dangerous and unfair situations at the border and all those border agents around the country who work to keep our country safe.”