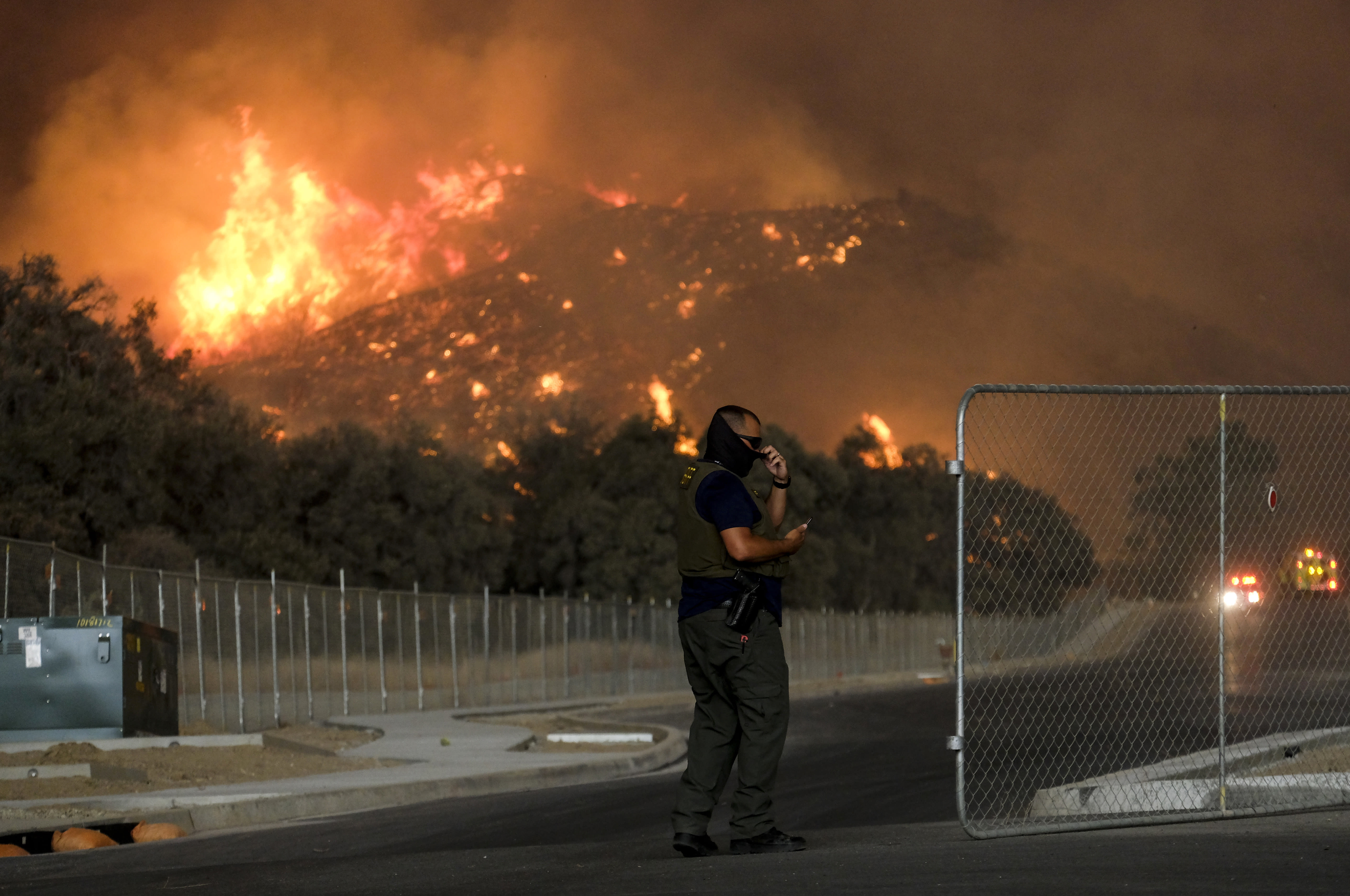 A sheriff’s deputy stands guard at a gate near a hillside as the Holy Fire burns in the Cleveland National Forest at Temescal Valley in Corona, Calif., Thursday, Aug. 9, 2018. (AP Photo/Ringo H.W. Chiu)

California Gov. Jerry Brown has declared a state of emergency as a wildfire that forced 20,000 people from their homes continues to rage south of Los Angeles.

Brown issued the declaration Thursday for Orange and Riverside counties because of a fire in the Cleveland National Forest that’s threatening thousands of homes.

The fire near Lake Elsinore is devouring brushy foothills, ridgetops and canyons. It’s blackened 16 square miles (41 square kilometers) and is only 5 percent contained.

On Thursday, flames came within yards of some homes.

A man charged with intentionally setting the fire is scheduled for arraignment on Friday.

Authorities are urging evacuation for people in the path of an arson-caused wildfire that’s exploding along ridges, foothills and canyons south of Los Angeles.

The call for voluntary evacuations was issued Thursday for people near a mountainside above Lake Elsinore, joining at least 20,000 people who are under mandatory evacuation orders as fire churns through Cleveland National Forest.

The fire is burning through dense, heavy chaparral and came within yards of some homes in the foothills. Early on, the blaze that erupted Monday burned a dozen cabins.

Winds gusting to nearly 20 mph are helping drive the flames through tinder-dry brush. Temperatures have topped 100 degrees and the humidity is in single digits.

Meanwhile, a man charged with starting the fire refused to go to court Thursday. Forrest Clark could face life in prison if convicted.

At least 20,000 foothill and canyon residents have evacuated as a growing wildfire churns through the Cleveland National Forest south of Los Angeles.

Fire spokeswoman Kate Kramer says Thursday that the majority of the 15-square-mile (39-square-kilometer) blaze is burning in wildland areas. But officials are concerned about flames creeping down hillsides toward neighborhoods. The fire is just 5 percent contained.

Kramer says crews with air support are also trying to keep flames away from Santiago Peak, where critical communication infrastructure for the region is located.

A 51-year-old man arrested on suspicion of arson in connection with the so-called Holy Fire is expected in court Thursday.

California fire officials say the largest blaze ever recorded in the state is now more than half contained.

But the California Department of Forestry and Fire Protection says Thursday it will still take several weeks to fully surround the massive wildfire in Northern California because it’s burning in steep terrain that’s hard to reach.

Cal Fire says the blaze that has charred 475 square miles (1,230 square kilometers) of brush and timber is 51 percent contained.

New evacuations were ordered Wednesday. Flames are creeping down hillsides toward homes in the city of Lake Elsinore, where crews are prepared to provide structure protection.