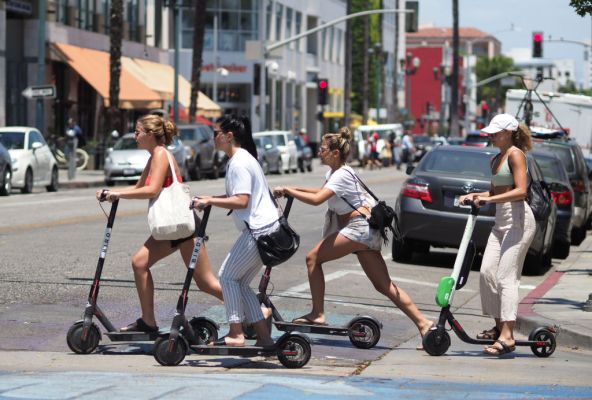 Despite regulatory hurdles on a city-by-city basis, electric scooter companies and their respective services are continuing to make their way to markets all over the world. Earlier this week, for example, Lime announced its entrance into Madrid, launching hundreds of electric scooters in the Spanish capital. About a week before that, competitor Bird launched in Paris and laid out its intentioned to bring electric scooters to Tel Aviv.

As Bird expands to international markets, it’s worth noting that competitor Lime has operated its bikes and scooters outside of the U.S. for quite some time. Last December, Lime brought its bikes to a number of European cities and in June, Lime brought its scooters to Paris. Lime also recently raised a $335 million round and teamed up with transportation behemoth Uber.

Nationwide, Bird, Lime, Spin, Goat and Skip have collectively deployed scooters in 33 cities. Outside of the U.S., you’ll find scooters from those companies in just three cities.

Over in the U.S., of course, the competitive landscape is an entirely different story. California is the main hot spot for scooters in the U.S., but they have also popped up in Texas, Washington D.C., North Carolina and other states throughout the country.

Unsurprisingly, regulation has proved to be an issue for many of these companies. In San Francisco, the Municipal Transportation Agency is currently reviewing permit applications from 12 electric scooter services — including ones from Lyft, Uber and Razor — looking to operate in the city. The permit process came as a result of Bird, Lime and Spin deploying their electric scooters without permission in the city in March. Fast forward to today and electric scooters are nowhere to be found on the streets of San Francisco.

The SFMTA initially said it expected to make a decision about which five, if any, companies would receive permits by the end of June. The SFMTA expects to finalize its recommendations and documentation “in the coming weeks,” the SFMTA wrote in a blog post last month. Once that’s done, the agency says it will work with companies to finalize and clarify the terms and conditions of the permit. The goal, according to the blog post, is to issue permits sometime in August.

As part of the 24-month pilot program, electric scooter companies selected to operate in the city will need to provide user education and insurance, share its detailed trip data with the city, have a privacy policy that protects user data, offer a low-income plan and operate in a to-be-approved service area. The city will allow no more than 2,500 electric scooters on the streets at any one time.

Last month, Bird tried to launch its scooters in Boston but regulators quickly cracked down, saying it would impound any scooters it found. And let’s not forget the drama that unfolded in Santa Monica, where Bird first deployed its scooters.

In Austin, D.C. and Portland, Ore., it’s a slightly different scenario. Over in Austin, dockless electric scooter startup GOAT says it’s working with the city to ensure its service meets the criteria laid out by regulators. Moving forward, GOAT says it’s actively working with other cities to pursue additional operating permits. Skip, which is trying to differentiate itself by being more heavy-duty, worked with city officials and lawmakers to ensure it had the green light before launching. In Portland, both Skip and Bird have received permits to operate electric scooters in the city.

With the sheer volume of capital pouring into these companies, along with interest from ride-hailing giants Lyft and Uber, it’s clear these scooters are here to stay. Whether cities like them or not, scooters are going to roll up. It’s just a matter of when and how many.