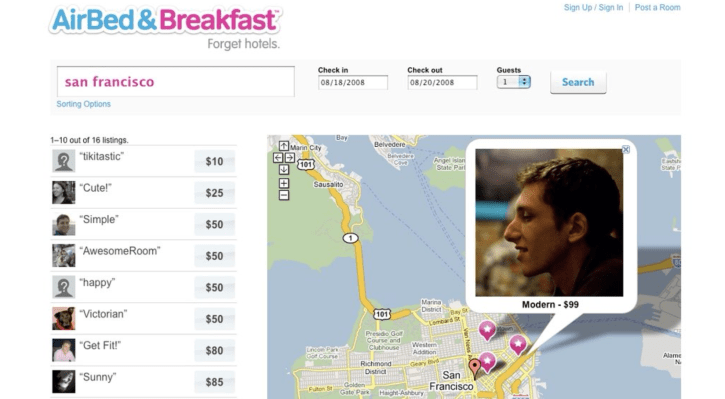 When we first wrote about the company a decade ago, it was a spare website cobbled together by its founders for the low low price of $20,000.

In the years since, the marketplace Airbnb created has radically transformed the rental landscape in cities, created an entirely new hospitality market and surged to a valuation of roughly $31 billion.

We researched the number of airbeds sold every year because that’s how big we thought Airbnb could become.

As it prepares for an initial public offering in 2019, it’s worth a look back on how far the company has come, and how its founders’ vision for a new type of way to monetize unused apartment space for budget travelers has become the engine driving a new kind of travel and new experiments in modern living (for better or worse).

When we wrote about the company in 2008, the pitch for Airbnb’s services had already been set.

AirBed and Breakfast will definitely appeal to younger travelers, and conventioneers who can’t find a regular hotel room. In overbooked Denver, where 20,000 people will be descending for the Democratic National Convention, hotels are already sold out. More than 600 people have found alternative accommodations through AirBed and Breakfast, and 50 to 100 new listings appear every day. Prices range from $20 a night for an airbed to $3,000 for an entire house.

Indeed, it’s likely that there would have been no Airbnb without the 2008 presidential campaign. The election created a serendipitous confluence of an incredibly unique historical moment where a groundswell of demand could be met by a new type of supply and Airbnb’s co-founders Brian Chesky and Joe Gebbia were there to capitalize on the opportunity.

It’s good to remember that in 2008, the co-founders were claiming that they could barely make rent. And they were certainly strapped for cash for the fledgling business. There, again, the 2008 election presented them with an opportunity.

“The world thought we were crazy,” Gebbia recalled in an interview.

But the RISD grads had that $20,000 in seed funding and politically themed cereal boxes to tide the business over. It was the cereal gimmick — selling Obama O’s and Captain McCains – for $40 a box that got them the hearing from Y Combinator co-founder Paul Graham and acceptance into the accelerator.

Three years later, the business was a rocket ship. It had pulled in a (whopping for the time) $112 million investment from Andreessen Horowitz, DST Global, and General Catalyst and was already on the path to bulldozing the old models of hospitality with a shared vision for visiting any city anywhere in the world.

“Airbnb, with its strong management team and engaged worldwide community is on a path to become a transformational company,” said Yuri Milner founder of DST Global, in a truly understated statement at the time.

So transformational, in fact, that the company would go on to raise billions more atop that hundred-million-plus Series B round.

But that success has not come without a certain cost.

For all of the ways in which Airbnb claims to be unlocking the local economy, it can’t avoid the accusations that it has locked out local renters in favor of financial speculators who are buying up apartments to lease to a traveling class rather than sustain a viable and vibrant neighborhood for the actual citizens that live there.

One study, published earlier this year (and funded by the AFL-CIO and the Hotel Trades Council), indicated that the company significantly impacted rental prices in New York.

It’s those kinds of figures that have led to the sometimes aggressive pushback from local real estate advocates. Indeed, it was just about three years ago that San Francisco protestors from the Coalition on Homelessness took over Airbnbs headquarters to protest what they viewed as the company’s complicity in the surge in evictions and homelessness in the city.

In a 2015 letter to New York legislators, Airbnb’s public policy chief at the time, David Hantman, wrote, “The majority of hosts use the money they earn to pay their bills and stay in their homes.”

And in a separate blog post (now apparently lost in a site redesign) around the same time, Hantman took Airbnb’s argument further. “In fact, Airbnb makes cities more affordable,” Hantman was quoted as writing in Vice. “Sixty two percent of Airbnb hosts in New York said Airbnb helped them stay in their homes and the typical Airbnb host in New York earns $7,530 per year — a modest, but significant amount that can make a huge difference for families.”

The company’s kerfuffles with regulators (a sort of mirror image of the woes faced by fellow marketplace service Uber and its American competitor Lyft) have not effected the way investors are valuing the virtual room-for-rent-filled house that Chesky and Gebbia have built.

As we reported earlier this year, Airbnb raised nearly $4.4 billion in funding as a private company, to date, and reports say it is on track to make between $3.5 billion and $4 billion in revenues this year from its business connecting travelers with private homes and an array of other related services.

That’s a long, long way from matching would-be attendees to the 2008 Democratic National Convention with air mattresses or sofas in Denver.