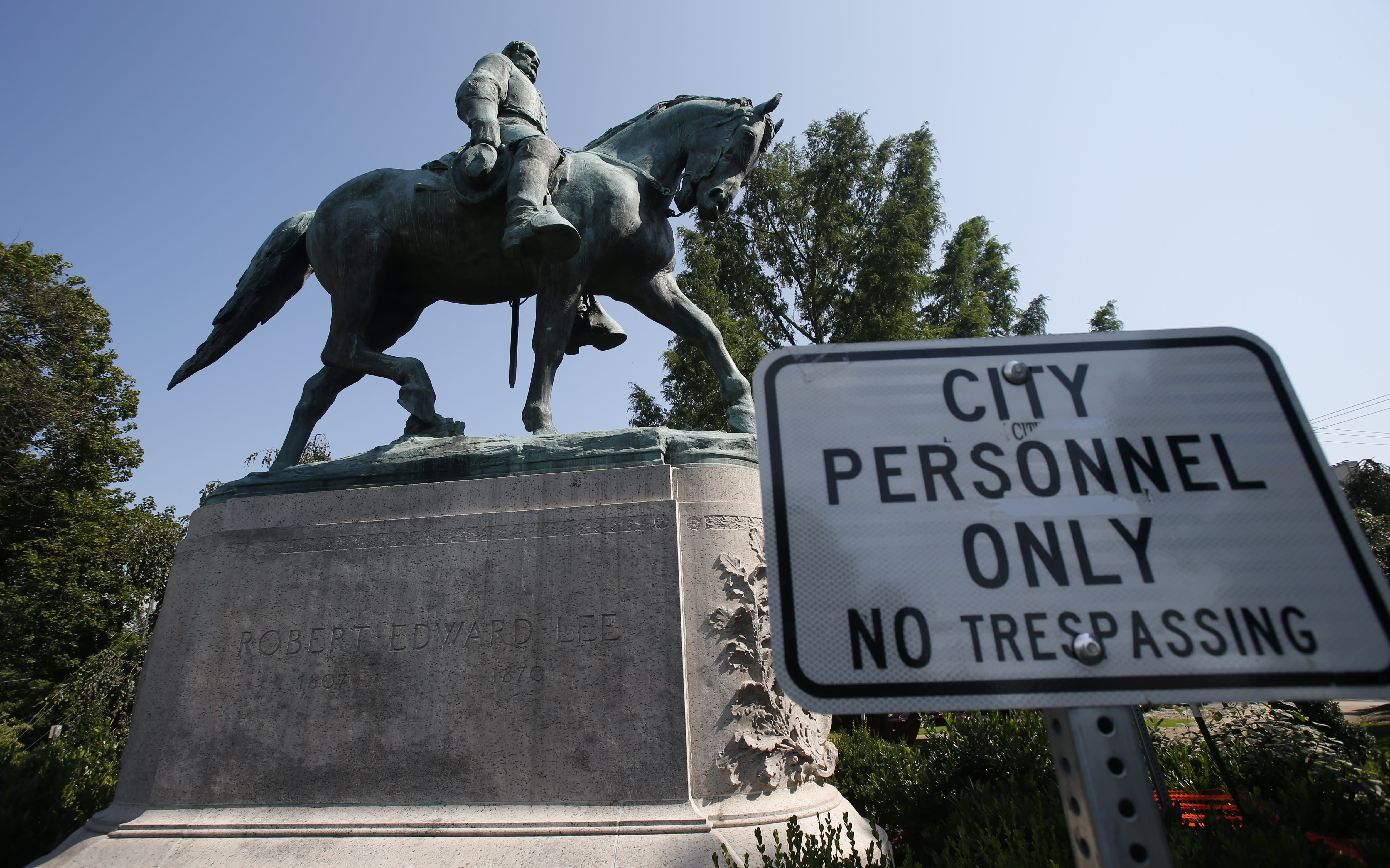 In this Monday, Aug. 6, 2018 photo, a No Trespassing sign is displayed in front of a statue of Robert E. Lee in Charlottesville, Va., at the park that was the focus of the Unite the Right rally. Pressure to take down America’s monuments honoring slain Confederate soldiers and the generals who led them didn’t start with Charlottesville. But the deadly violence that rocked the Virginia college town a year ago gave the issue an explosive momentum. (AP Photo/Steve Helber)

Pressure to take down America’s monuments honoring slain Confederate soldiers and the generals who led them didn’t start with Charlottesville. But the deadly violence that rocked the Virginia college town a year ago gave the issue an explosive momentum.

Confederate monuments at public parks, county courthouses and college campuses fell almost daily for weeks after a speeding car killed a woman and injured dozens in Charlottesville on Aug. 12, 2017. The vehicle plowed into a crowd protesting a gathering of white supremacists whose stated goal was to protect a statue of Gen. Robert E. Lee.

At least 30 Confederate monuments have been uprooted in the year since the Charlottesville clashes, according to the Southern Poverty Law Center. Groups including the Sons of Confederate Veterans complain America is purging history. Others say the monuments romanticize the Confederacy and downplay its defense of slavery and racism.

Here’s a look at some key monument battles in Charlottesville’s aftermath.

A 2015 law in North Carolina essentially prohibits permanent removal of Confederate monuments on public property without approval from state lawmakers. Protesters in Durham took matters into their own hands using a ladder and a rope — and found themselves charged with rioting and vandalism.

It was Aug. 14, two days after the violence in Charlottesville, when an angry crowd gathered around a monument to Confederate soldiers outside a former courthouse building. A woman climbed a ladder and attached a rope to the bronze statue. Protesters yanked it down.

The woman on the ladder, 22-year-old college student Takiyah Thompson, was among a dozen protesters charged with crimes in the monument takedown.

None of the cases stuck. A judge found one defendant not guilty and dismissed charges against two others. On Feb. 20, six months after the statue came down, Durham District Attorney Roger Echols dropped all remaining prosecutions.

A 2015 state law essentially prevents permanent removal of Confederate monuments unless the General Assembly agrees to it.

They remained standing for almost another year before Mayor Catherine Pugh ordered all four taken down on Aug. 15, 2017, following the violence in Charlottesville. City crews dismantled them in the dead of night.

The Maryland Sons of Confederate Veterans complained that Baltimore acted without approval from the Maryland Historical Trust. Pugh said waiting would have risked more violence.

“It was important that we move quickly and quietly,” Pugh said.

Civil rights groups wanted Confederate statues out of public parks in Memphis, arguing they glorified racism in a city where most residents are black. But Tennessee’s Heritage Protection Act prohibited removing monuments to U.S. military figures on public land.

Memphis city leaders sought a waiver in 2016 to relocate one monument — a statue of Confederate Gen. Nathan Bedford Forrest, who had also been a slave trader and Ku Klux Klan leader. Their petition was denied.

After Charlottesville’s bloody protests, the Memphis city council looked for new options. And they found a loophole.

On Dec. 20, the city sold the two public parks for $1,000 apiece to a nonprofit group. Almost immediately, the new owner took down the Forrest monument as well as statues of Confederate President Jefferson Davis and Capt. J. Harvey Mathes.

A judge upheld the move. Tennessee legislators were outraged. They soon amended the law to close the loophole. The state House also stripped $250,000 for Memphis’ bicentennial celebration from a budget bill.

A commission delivered those recommendations in July to city officials in Richmond, Virginia, after spending nearly a year considering five Confederate statues along Monument Avenue in the former Confederate capital.

Virginia has one of the oldest state laws protecting war monuments. Richmond’s city attorney warned that removing any of the statues would risk fines and possible criminal charges.

Still, the commission urged removing the monument to Davis, saying its design “most unabashedly” romanticizes the South while downplaying the role of slavery in the Civil War.

City officials haven’t taken action. Meanwhile, vandals splattered the Lee monument’s base with red paint in early August, about a week before the Charlottesville anniversary.

Carved into a mountainside, the towering Confederate figures of Stone Mountain have shown a rock-solid resistance to the wave of toppling Southern monuments.

The giant sculpture of Jefferson Davis and Gens. Robert E. Lee and Thomas “Stonewall” Jackson has long made Stone Mountain Park near Atlanta one of Georgia’s top tourist attractions. After the bloodshed in Charlottesville, the Democrat running to become the state’s next governor said it’s “a blight on our state and should be removed.”

Stacey Abrams would be the first black woman elected governor of a U.S. state if she wins in November.

Demolishing the granite monument would be tough, and not just because of its imposing scale. Stone Mountain is protected by its own state law that mandates the carving “be preserved and protected for all time.”

Confronted about her criticism of Stone Mountain at a recent event, Abrams said the sculpture was created “to terrify African Americans.” But she also hedged on whether it should be destroyed.

For the complete AP coverage marking one year since the rally in Charlottesville, visit https://apnews.com/tag/CharlottesvilleAYearLater .