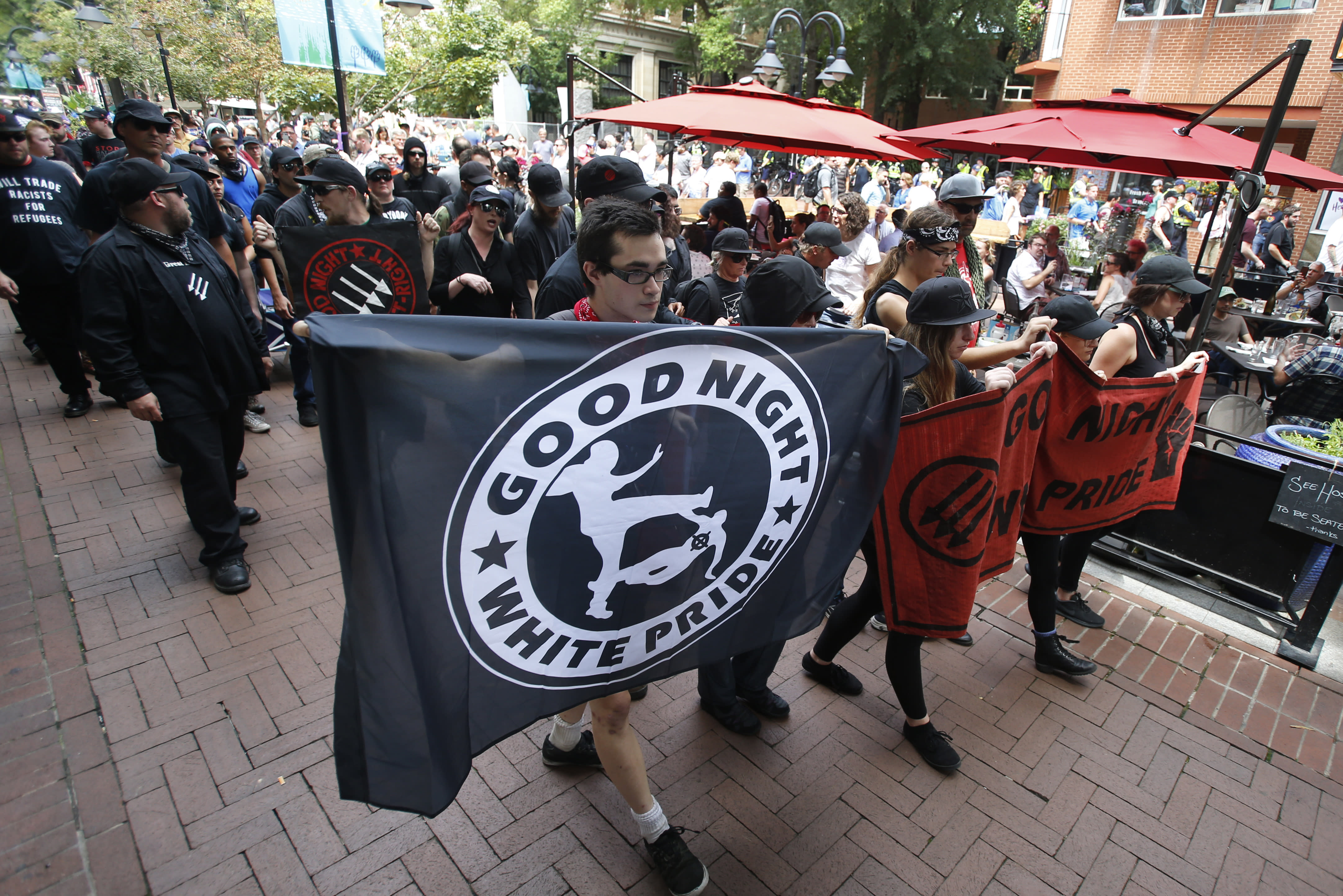 A group anti-fascism demonstrators march in the downtown area in anticipation of the anniversary of last year’s Unite the Right rally in Charlottesville, Va., Saturday, Aug. 11, 2018. (AP Photo/Steve Helber)

The Latest on events marking the anniversary of white supremacist violence in Charlottesville, Virginia (all times local):

A group of anti-fascist activists are rallying peacefully in downtown Charlottesville as the city marks the anniversary of last summer’s white supremacist violence.

A few dozen black-clad demonstrators marched through downtown Saturday afternoon, stopping to pause for a moment of silence at the site where a woman protesting a white nationalist rally was killed last August.

Some in the group scrawled messages in chalk at the site that hosts a makeshift memorial to Heather Heyer. Several police officers watched from a distance.

The group then continued marching, with some members carrying a sign that said, “Good night white pride.”

As the activists made their way wordlessly through a downtown pedestrian mall, people sitting outdoors at cafes began singing “This Little Light of Mine.”

Businesses are opening in downtown Charlottesville, where visitors trickling in are being met by heavy security on the one-year anniversary of white nationalist violence in the Virginia city.

Around 10 a.m. Saturday, when many shops were beginning to open, law enforcement officers outnumbered visitors in the popular downtown shopping district. Concrete barriers and metal fences had been erected, and police were searching bags at two checkpoints where people could enter or leave.

Lara Mitchell, a sales associate at Ten Thousand Villages, a shop that sells artwork, jewelry, and other items, said the security seemed “a little bit over the top.” But she added she doesn’t fault authorities for taking such strict measures.

She says, “It’s nice that they’re here to protect us.”

Saturday marks a year since white nationalists marched through the University of Virginia campus with torches, clashing with a group of counterprotesters. The following day, a much larger gathering of white nationalists near a downtown park erupted into violence.

The president of the University of Virginia has offered an apology to the students and community members who faced off a year ago against white supremacists during a march through campus.

UVA President James Ryan spoke to a crowd gathered Saturday morning for a service of reflection on the anniversary of the march. He said that those who stood up against the racists showed remarkable “courage and bravery” and that the university must admit its mistakes.

Critics have said the university was unprepared and didn’t do enough to intervene during the clashes, which left several people injured.

Specifically addressing those who were attacked during the march, Ryan said, “I am sorry. We are sorry.”

The service also featured musical performances, a poetry reading and a moment of silence.

Among those in attendance was Susan Bro, the mother of 32-year-old Heather Heyer, a counterprotester who was killed the day after the march on campus, when violence unfolded in downtown Charlottesville

President Donald Trump says he condemns “all types of racism and acts of violence” as he marks the one-year anniversary of deadly clashes in Charlottesville, Virginia.

It was a dramatic shift in tone from last year, when he said there was “blame on both sides” for the violence that broke out when white nationalists descended on Charlottesville to protest the removal of Confederate statutes and marched through town shouting racist slurs. Trump said then the group included “fine people.”

In Saturday’s tweet, Trump says the “riots in Charlottesville a year ago resulted in senseless death and division.”

He adds that, “We must come together as a nation. I condemn all types of racism and acts of violence. Peace to ALL Americans!”

Police are blocking off streets and mobilizing hundreds of officers for the anniversary of a deadly white nationalist rally in Charlottesville, Virginia.

State and local authorities framed this weekend’s heightened security as a necessary precaution, but some community activists are concerned the measures could be a counterproductive overreaction.

An independent investigation of last year’s rally violence found the chaos stemmed from a passive response by law enforcement and poor preparation and coordination between state and city police.

University of Virginia professor Lisa Woolfork says she doesn’t know anyone who feels safer because of the increased police presence. Woolfork is also a Black Lives Matter Charlottesville organizer.