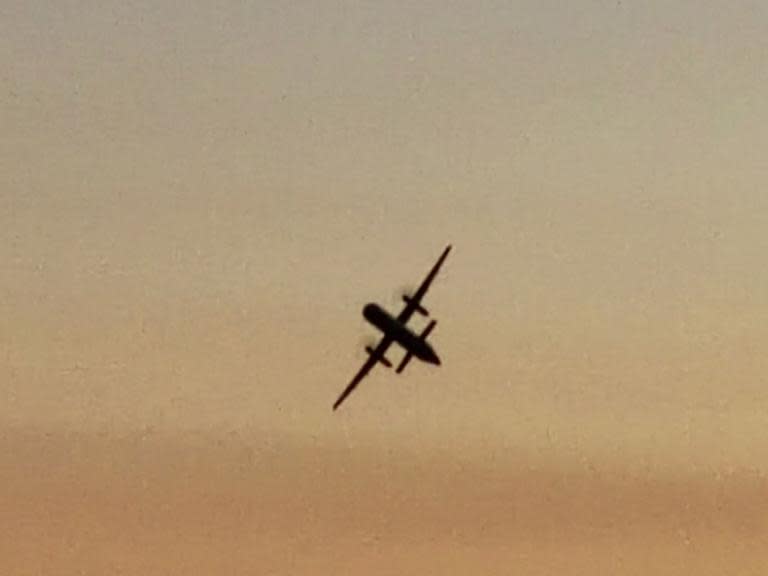 Audio has emerged of an extraordinary conversation between a “suicidal” airline employee who stole a passenger plane and air traffic controllers trying to guide him back down.

The ground service agent took off from a Seattle airport in a 76-seater plane at the height of rush hour on Friday evening.

The Horizon Air Q400, which performed a number of dangerous manoeuvres, was chased by military jets before it crashed into a small island in the Puget Sound after 8pm. No one else was on board.

In audio obtained by The Seattle Times, the 29-year-old man is called “Rich” by air traffic controllers at Sea-Tac International Airport.

Pierce County police said the man was suicidal and there was no connection to terrorism. He “did something foolish and may well have paid with his life,” sheriff Paul Pastor said.

Below is the transcript of the audio released so far.

Rich: …Some gas to go check out the Olympics and errr, yeah.

Air traffic controller (ATC): Ok and Rich, do you know, are you able to tell what altitude you are at?

Rich: Yeah that’s all mumbo… I have no idea what all that means, I wouldn’t know how to punch it in. I’m off autopilot.

Rich: You taking me to the jets?

ATC: Nah I’m not taking you to any jets, I’m actually keeping you away from aircraft that are trying to land at Sea-Tac.

Rich: Oh ok yeah I don’t wanna screw with that. I’m glad you’re not, you know, screwing up everyone else’s day on account of me.

ATC: (Inaudible) Can we just shut down?

Rich: Yeah I don’t know what the burnage… burnout… is like on take-off, but yeah it’s burned quite a bit faster than I expected.

Rich: Ah man those guys would rough me up if I tried landing that. I think I might mess something up there too. I wouldn’t want to do that. I’ll hopefully… Oh they’ve probably got anti-aircraft!”

ATC: No they don’t have any of that stuff. We’re just trying to find a place for you to land safely.

Rich: Yeah I’m not quite ready to bring it down just yet, but holy smokes I’ve got to stop looking at the fuel because it’s going down quick.

ATC: Ok Rich if you could, could you start a left-hand turn, and we’ll take you down to the southeast please.

Rich: This is probably like jail time for life, huh? I mean I would hope it is for a guy like me.

ATC: Well Rich we’re not going to worry or think about that, but could you start a left-hand turn please?

Rich: Hey, you think if I land this successfully (inaudible) would give me a job as a pilot?

ATC: You know I think they would give you a job doing anything if you can pull this off.

ATC: If you wanted to land, probably the best bet is that runway just ahead and to your left. Again that’s McChord field, um, if you wanted to try that might be the best way to set up and see if you can land there, or just like the pilot suggests another option would be over Puget Sound into the water.

Rich: Dang, you talk to McChord yet? Because I don’t think I’d be happy with you telling me I could land like that, because I could mess stuff up.

ATC: Well Rich I already spoke to ‘em and just like me, what we want to see is you not get hurt or anybody else get hurt, so like I said if you want to try to land that’s probably the best place to go.

Rich: Hey I want the coordinates of that orca, with err, you know the mama orca with the baby, I wanna go see that guy.