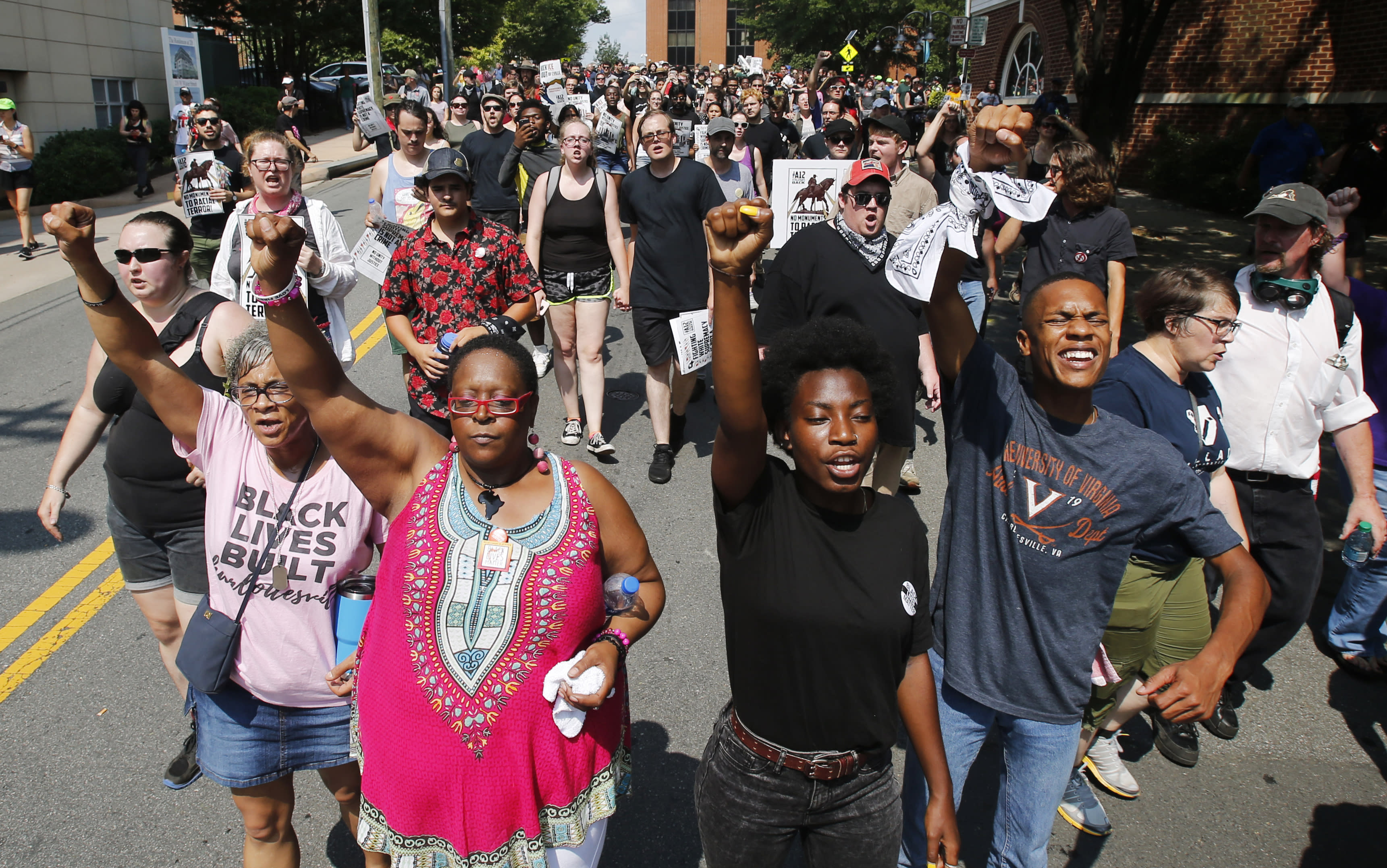 A group of about 30 white nationalists has marched to a park near the White House for what they call a rally in favor of white civil rights.

Thousands of counterprotesters are in the area, too, and jeered and heckled the white nationalists as they made their way down the street surrounded by police.

The demonstration and counterdemonstration come on the anniversary of last year’s deadly gathering of neo-Nazis, skinheads, Ku Klux Klan members, and others in Charlottesville, Virginia.

Sunday’s gathering is being led by the principal organizer of last year’s “Unite the Right” event, Jason Kessler.

A contingent of about 30 white nationalists is marching down a Washington street toward the White House surrounded by a protective bubble of police officers and vehicles.

Hundreds of counterprotesters are walking alongside the group but keeping on the sidewalks, many of them shouting and taunting the nationalists as they make their way to a park in front of the White House.

The demonstration and counterdemonstration come on the anniversary of last year’s deadly gathering of neo-Nazis, skinheads, Ku Klux Klan members, and others in Charlottesville, Virginia.

Sunday’s gathering is being led by the principal organizer of last year’s “Unite the Right” event, Jason Kessler, who calls the demonstration a rally for white civil rights.

More than 1,000 protesters are gathered in Freedom Plaza near the White House to rally against a white nationalist demonstration scheduled for later in the day.

The demonstration is being held on the first anniversary of a white supremacist rally in Charlottesville, Virginia, that turned violent and led to the death of a counterprotester.

The counterprotesters plan to march to Lafayette Square in front of the White House, just before the arrival of the white nationalists. Police have erected a maze of barricades to keep the two sides apart.

The counterprotesters are expected to far outnumber the white nationalists.

The mother of a woman killed when a car plowed into a crowd of counterprotesters at a white nationalist rally last summer has visited the site of the attack to mark the anniversary of her daughter’s death.

Heather Heyer’s mother, Susan Bro, embraced supporters Sunday in downtown Charlottesville. At one point, she asked the crowd to raise their fists in solidarity, and she laid flowers at a makeshift memorial.

Bro said there’s still “so much healing to do.” She said the city and the country have a “huge racial problem” and that if it’s not fixed, “we’ll be right back here in no time.”

Bro also said the day was about more than just her daughter. She recognized the other victims of the attack, which injured dozens of people, and thanked the two Virginia state troopers killed in a helicopter crash for their sacrifice.

Lt. Jay Cullen and Trooper-Pilot Berke Bates died when their helicopter crashed while deployed as part of the response to last year’s violence.

A park across the street from the White House is already filling up with people who oppose a white nationalist demonstration that is scheduled to take place later Sunday.

The white nationalists are gathering in Washington on the first anniversary of their rally in Charlottesville, Virginia, that turned violent and led to the death of a counterprotester.

A stage has been set up in Lafayette Park and rap music is playing for a crowd of about 300, many of whom are carrying signs saying “Shut down white supremacy.”

Uniformed police officers and a line of police barricades have cut the park in half, restricting the counterprotesters to the northern half, farthest from the White House.

A counterprotest organizer, speaking from the stage, said: “We will be here until these fascist forces are gone, however long that takes.”

The white supremacist rally is scheduled to end at 7:30 p.m.

More than 100 people are demonstrating against racism in downtown Charlottesville, marking the one-year anniversary of a violent white nationalist rally and protesting this year’s ramped-up police presence.

The group began marching Sunday morning after a rally held at a city park and made its way toward downtown. Some marchers linked arms as they walked.

The group directed chants against police officers who were accompanying the march, including “cops and Klan go hand in hand.”

Law enforcement officials faced blistering criticism in the wake of last year’s rally for what was perceived as a passive response to the violence that unfolded.

A review by a former U.S. attorney found a lack of coordination between state and city police and an operational plan that elevated officer safety over public safety.

Demonstrators on Sunday chanted, “Will you protect us?”

Dozens of activists and residents have gathered at a Charlottesville city park to protest racism and to observe the one-year anniversary of a rally by white supremacist that turned deadly.

The Rev. Seth Wispelwey is a founder of a group of clergy and lay people called “Congregate C-ville” last year. The group came together in direct response to white nationalists who gathered in Charlottesville for a “Unite the Right” rally on Aug. 12, 2017.

On that day, white supremacists and counterprotesters clashed in the city streets before a car driven into a crowd struck and killed 32-year-old Heather Heyer.

Wispelwey says the city’s residents are still reeling from the violence that day, but he expressed hope that the anniversary can be a turning point.

This item has been updated to correct the spelling of Wispelwey in one instance.

A day after tensions between police and community activists nearly boiled over on the University of Virginia’s campus, the city of Charlottesville plans to mark Sunday’s anniversary of a deadly gathering of white supremacists with a rally against racial hatred. But 115 miles (185 kilometers) away in Washington, the principal organizer of last year’s “Unite the Right” event will hold a “white civil rights rally,” and police are preparing for counterprotesters.

Jason Kessler abandoned plans for a similar anniversary event in Charlottesville. His Washington permit application says he expects 100 to 400 people Sunday afternoon in Lafayette Park, near the White House.

But some leading figures in the white nationalist movement have said they won’t attend or encouraged supporters to stay away. And the events likely will be dwarfed by counterprotests, for which permits also have been issued.