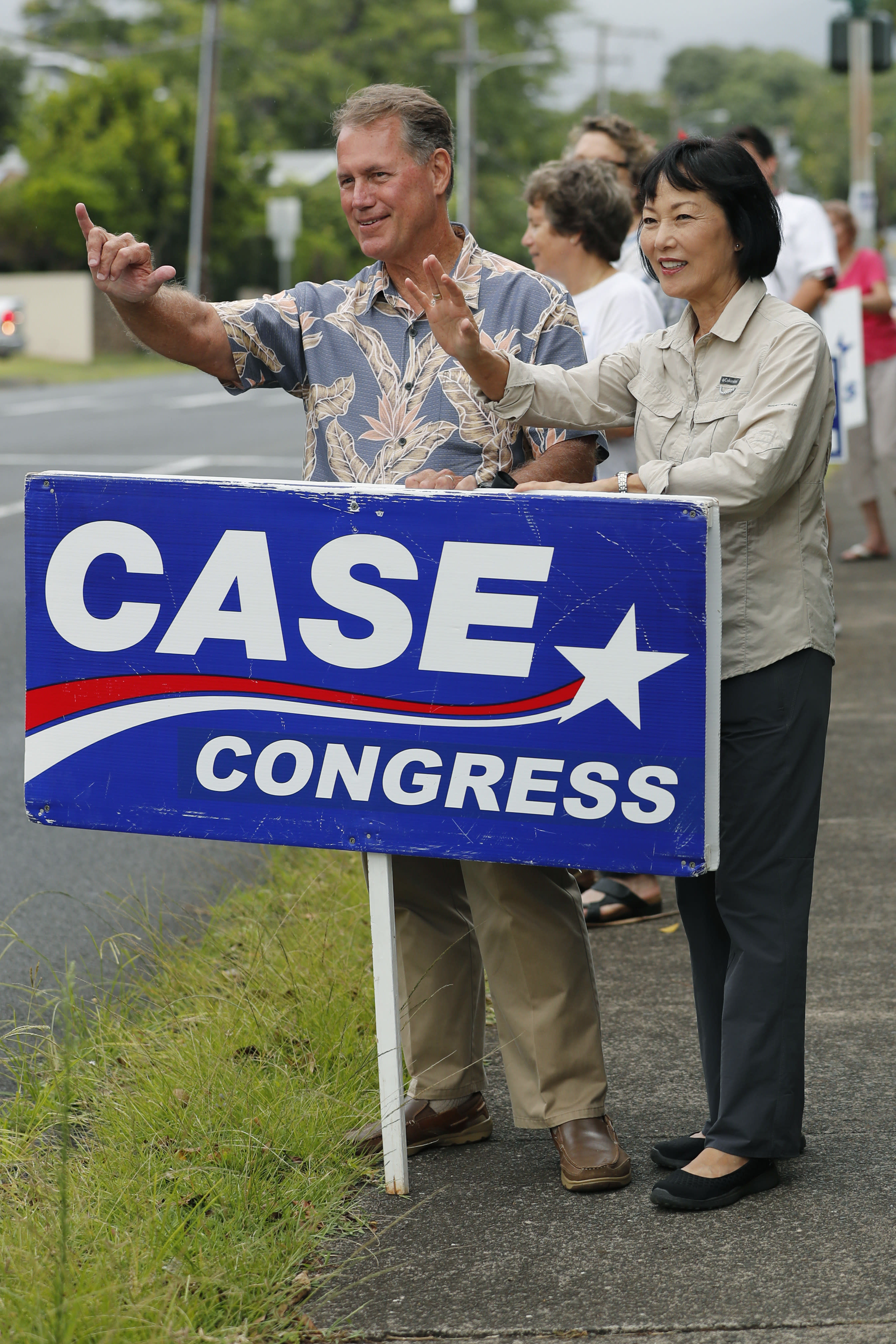 HONOLULU (AP) — The Latest on the primary election (all times local):

Tupola is the House minority leader and one of only five Republicans on the 51-member body.

Tupola says one of her primary focuses as governor would be to address affordable housing and to fight for Native Hawaiians to get the opportunity to use land set aside for them decades ago. She also says the state needs to restructure its tax code to give low-income workers more of a break.

Tupola is a music teacher who formerly taught at a local community college. She was first elected to the state legislature in 2014.

Former Congressman Ed Case has emerged from a crowded field to win the Democratic Party primary to represent Honolulu in Congress.

The 65-year-old fiscal conservative on Saturday defeated five other major candidates including Lt. Gov. Doug Chin, who is the architect of Hawaii’s legal battle against President Donald Trump’s travel ban.

The winner of the Democratic primary is almost guaranteed to win in the general election in Hawaii.

Another contender was 29-year-old Kaniela Ing, a democratic socialist who hoped to follow in the footsteps of colleague Alexandria Ocasio-Cortez of New York to score an upset victory.

Case served in Congress from 2002 to 2007, giving him an edge in experience and name recognition.

Gabbard defeated Sherry Alu Campagna on Saturday to be her party’s candidate to represent rural Oahu and the neighbor islands in Congress.

Campagna had criticized Gabbard for refusing to debate her. Campagna noted Gabbard had argued in the past that candidates should participate in debates to present their positions and be held accountable for their opinions.

Gabbard was first elected to the U.S. House in 2012. She is one of the first female combat veterans to serve in Congress. She deployed to Iraq and Kuwait with the Hawaii National Guard.

Gabbard faces singer Brian Evans of Maui in the general election in November. He ran unopposed for the Republican Party’s nomination.

Early results from Hawaii’s primary election have Gov. David Ige holding back U.S. Rep. Colleen Hanabusa in the race to keep his job.

The first results after the polls closed Saturday put former U.S. Rep. Ed Case ahead of Lt. Gov. Doug Chin in the race to represent Honolulu in Congress.

The winners of most of the Democratic Party’s primary races will be the favorites to win the general election in November.

Polls have closed in Hawaii, where the state’s primary election is being held.

Polls closed at 6 p.m. local time, and state election officials expected the first batch of results to be released shortly after.

There are two high-profile races in the primary, which essentially serves as the general election since the state is heavily Democratic. Republicans didn’t field candidates in some races.

Gov. David Ige is being challenged by U.S. Rep. Colleen Hanabusa in one top race.

Another high profile race is the battle for the seat that Hanabusa is giving up.

Former U.S. Rep. Ed Case is seeking a return to Washington, and is being challenged by Lt. Gov. Doug Chin, who led the legal fight against President Donald Trump’s second travel ban, and Kaniela Ing.

Boots was at the polls with her 3-year-old daughter.

Boots says Hanabusa is fighting for women’s rights and that was a major factor for her.

Some in Hawaii have been critical of Ige’s response to a false missile alert that sent the state into a panic in January, a major embarrassment for his administration.

Boots says she was terrified by January’s false missile alert.

The most hotly contested matches in this deep blue Hawaii are for governor and the state’s 1st Congressional District.

The winners of most of the Democratic Party’s primary races in Hawaii will be the favorites to win the general election in November.

Daryl Chang, a Republican who works in the medical field in Honolulu, voted for a Democrat in Saturday’s gubernatorial primary.

He says he voted for Gov. David Ige and thinks he’s thoughtful.

Chang and many others in Hawaii participated in the state’s primary elections.

Some in Hawaii have been critical of Ige’s response to a false missile alert that sent the state into a panic in January, a major embarrassment for his administration.

But Chang says he doesn’t see the governor as being ultimately responsible.

Sixty-four-year-old Chang says he has lived in Hawaii almost his entire life, only leaving to attend college for four years.

Kaniela Ing, a candidate for Hawaii’s 1st Congressional District seat, was hoping for a last-minute surge before the election and got help from a rising star in the Democratic party, Alexandria Ocasio-Cortez of New York, who campaigned for him in Honolulu on Thursday.

Ocasio-Cortez, a Democratic Socialist, said she was down 35 points in the polls before upsetting a 10-term incumbent in the New York primary. “And we changed that in two weeks because we were talking to people who hadn’t been excited about the political process before,” she told Hawaii News Now.

The winners of most of the Democratic Party’s primary races in Hawaii this weekend will be the favorites to win the general election in November.

The most hotly contested matches in this deep blue state on Saturday are for governor and the state’s 1st Congressional District.

U.S. Rep. Colleen Hanabusa is challenging one-term incumbent Gov. David Ige in the gubernatorial primary. The move has echoes of four years ago when Ige, then a state senator, challenged and defeated a sitting governor, Gov. Neil Abercrombie in the primary.

Both Hanabusa and Ige are experienced, long-time politicians in Hawaii, leading to a close race.

Six major figures from the Democratic Party are competing to succeed Hanabusa in Washington.

The diverse list includes a 65-year-old fiscally conservative Democrat and a 29-year-old democratic socialist who advocates giving all Americans Medicare and making college tuition free. Two of the others gained notoriety by opposing President Donald Trump.