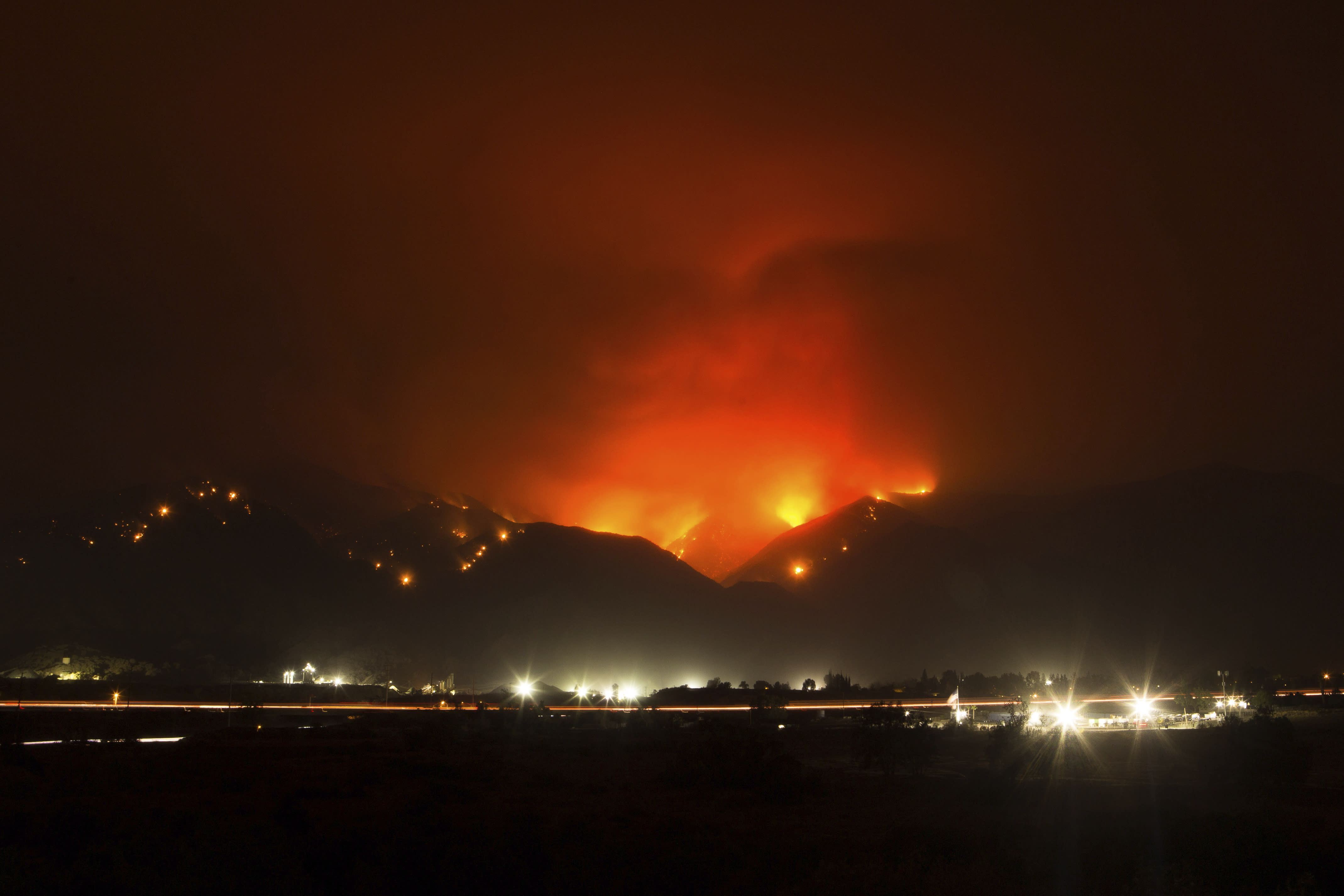 Gusty winds continue to drive a wildfire through the Cleveland National Forest south of Los Angeles and crews are still struggling to keep the flames away from homes.

Fire officials say the blaze near homes in the hills above Lake Elsinore has grown to nearly 30 square miles (77 square kilometers) after nearly doubling in size overnight. However, firefighters also doubled their containment from 5 to 10 percent.

The fire has destroyed 13 homes and cabins and thousands of houses remain threatened.

Some 20,000 people have been under evacuation orders for days.

The man charged with setting the fire, local resident Forrest Clark, was in court Friday where he made several bizarre outbursts and called the charges a lie. His arraignment was postponed and he remains jailed.

Nielsen spoke Friday at a press briefing in Redding, California, to update the public on the Carr Fire in Shasta County.

The fire was 51 percent contained as of Friday morning and was burning into remote and rugged forest land. Grass, brush and trees are so dry from years of drought and recent heat that the potential remains for the fire to grow.

It sparked nearly three weeks ago.

The Carr Fire has killed six people, including two firefighters, and burned more than 1,000 homes.

Yosemite National Park will reopen Tuesday, 14 days after a wildfire choked the park with smoke at the peak of tourist season.

The scenic Yosemite Valley and other areas have been closed since July 25 along with hundreds of campsites and hotels.

Though the blaze didn’t reach the heart of the park, it burned in remote areas, making roads inaccessible and polluting the area with smoke.

The closure has dealt a financial blow to Yosemite at the height of the summer season and caused upheaval for thousands of tourists whose summer trips were canceled.

The man accused of setting a Southern California forest fire appeared in a jailhouse courtroom and made several outbursts, claiming that his life was being threatened.

When the commissioner ordered bail to remain at $1 million, Clark shouted that he could easily afford it.

At one point Clark covered his face with his long hair and later he stared directly at a camera providing a feed to reporters outside the courtroom.

His attorney had asked that Clark’s presence be waived, but the commissioner ordered the defendant to appear.

The 51-year-old is charged with arson and other crimes.

Clark is a resident of the canyon where the fire was sparked Monday.

A fire official has said Clark sent threatening emails, including one that said, “this place will burn.”

This item corrects the spelling of Forrest Gordon Clark’s first name and clarifies that he appeared in a jailhouse courtroom.

Teresita Reyes and her husband are among some 20,000 people under evacuation orders in Southern California as a forest fire swept through foothill neighborhoods.

The 51-year-old state health inspector says she was attending a friend’s wedding Wednesday when she found out home in the city of Lake Elsinore was under a mandatory evacuation order.

She says she congratulated the couple and snuck out quietly to slog back home through traffic, pack another suitcase of clothes and grab her passport and a box of important documents.

Since then, she and her husband have been staying at a hotel with a faulty air conditioner while their three dogs and cat are holed up at the family’s plumbing business.

She says they were on edge after learning the arson fire reached about a half mile (0.8 km) from their home and that they expect to be out at least another night.

An intentionally-set Southern California forest fire that raged perilously close to homes has continued to grow with very little containment.

Firefighters on Friday are protecting foothill neighborhoods in the city of Lake Elsinore near where the blaze flared up amid unpredictable winds a day earlier.

At least 20,000 residents are evacuated.

Crews working in sweltering conditions and steep terrain hope to make progress before winds whip up again later in the day.

California Gov. Jerry Brown on Thursday declared a state of emergency for Orange and Riverside counties.

A suspect charged with intentionally setting the fire is scheduled to be arraigned Friday.

Fire crews have made progress against the biggest blaze in California history but officials say the fire won’t be fully contained until September.

The California Department of Forestry and Fire Protection said Friday the blaze in Northern California is 60 percent contained.

The Mendocino Complex Fire of twin fires burning side by side has been raging through tinder-dry vegetation for two weeks.

It has destroyed 119 homes and charred an area the size of Los Angeles.

Official say a much more destructive blaze burning farther north near the city of Redding is now 51 percent contained.

Firefighters battled through the night to keep a raging forest fire from reaching foothill neighborhoods in Southern California.

The arson blaze in the Cleveland National Forest gained renewed strength Thursday, racing along ridges and coming within yards of homes.

Crews on Friday are allowing some hillsides to burn, to reduce fuel and make it harder for flames to jump roadways later in the day when the winds pick up.

Hundreds more firefighters have joined the battle, bringing the total to 1,200. The fire has blackened 16 square miles (41 square kilometers) of timber and brush and is only 5 percent contained. More than 20,000 residents are evacuated.

California Gov. Jerry Brown has declared a state of emergency for Orange and Riverside counties.

A man charged with intentionally setting the fire is scheduled for arraignment Friday.