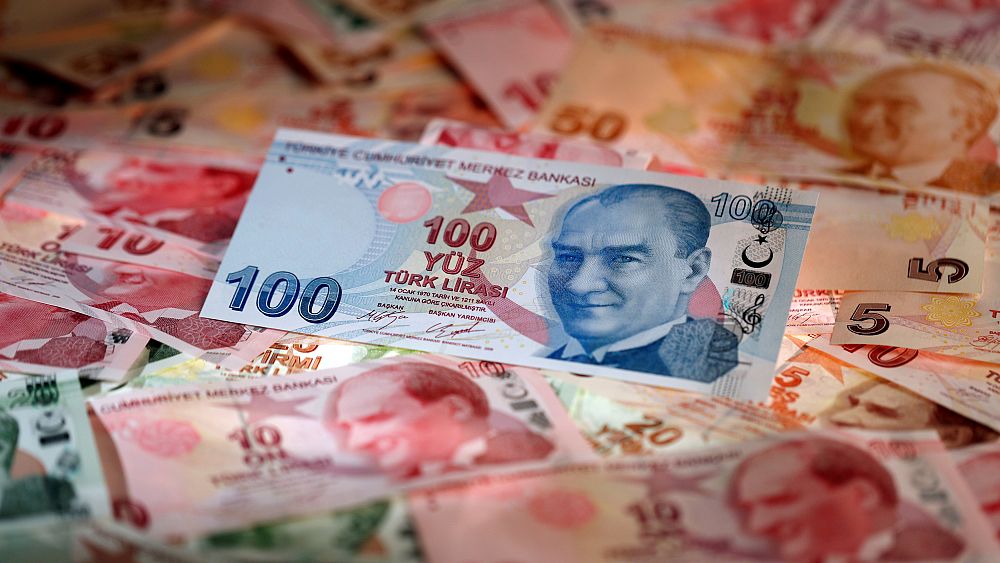 Turkey’s central bank has vowed to take all necessary action to stem the lira’s spiral, as the country’s currency continues to spook global markets.
The lira fell to a record low of around $7.24 against the dollar in early Asian Pacific trade on Monday, before staging a recovery. Other currencies – the South African rand, Russian rouble and Indian rupee – have also been affected.

It comes amid concerns over worsening ties with the United States and President Erdogan’s influence over the economy.

What is Turkey’s response to the crisis?

The Turkish Finance Minister Berat Albayrak said in an interview with Hurriyet newspaper on Sunday that the government had drafted an action plan and would start implementing it to ease investor concerns.

The minister spoke of a plan to help banks and medium-sized businesses which are most affected by currency fluctuations. Albayrak also denied suggestions that the government might seize bank accounts held in dollars.

Using language similar to that of Turkey’s president, he described the lira’s weakness as an “attack” on the country. Recep Tayyip Erdogan has accused Washington of waging an economic war on Turkey.

However, no details of the economic plan were immediately given and the government has been criticised for responding too late.

In an attempted crackdown on speculators, the Istanbul prosecutor’s office has launched an investigation into individuals suspected of actions that threaten Turkey’s economic security – private broadcaster CNN Turk has reported. Action against social media posts about the exchange rate has also been announced.

The Turkish lira lost 20 percent of its value last week, which culminated in the announcement by President Donald Trump that the US was doubling tariffs on imports of Turkish steel and aluminium.

What’s behind the row with the United States?

In a speech in Trabzon on Sunday that was full of nationalist rhetoric, Erdogan lashed out at the Trump administration, accusing it of “threatening” Turkey and carrying out an “operation” against the country.

The president also called on Turks to sell dollars and buy liras, which has done nothing to reassure the markets.

Relations between Turkey and the US have long been deteriorating. The two countries have clashed over Syria, with Ankara particularly angry over Washington’s alliance with Kurdish forces.

The latest dispute is over the American pastor Andrew Brunson, held in Turkey on charges of spying and links to the banned Gulen movement that the US believes are politically motivated.

Erdogan has accused Washington of threatening his country. The Trump administration has denied accusations that it tried to impose a deadline for Brunson’s release.

Last week the US imposed sanctions on the Turkish justice and interior ministers, in anger at Brunson’s detention. Erdogan has accused the US of preferring “a pastor to its strategic NATO ally”.

Why is Erdogan’s handling of the economy causing alarm?

The Turkish economy’s problems go deeper than its row with the US. The currency has lost nearly half its value this year, reflecting fears over high inflation and borrowing costs.

A construction boom financed by borrowing has seen debt held by Turkish banks and companies soar to an estimated $350 billion.

European banks are particularly exposed, and there are concerns over how the debt can be financed, given the currency’s weakness and inflation – which reached 15.9 percent in July and is expected to go higher still.

Recep Tayyip Erdogan has refused to cede to calls for a rise in interest rates. He says he is their “enemy” and has described them as a “tool of exploitation”, arguing that cheap credit is the way to fuel the economy.

There are concerns over the president’s influence. His re-election and changes to the constitution have boosted his powers, and it’s feared he wants to tighten his grip on monetary policy.

The president can appoint central bank governors and his finance minister is none other than his own son-in-law, seen by many as unqualified for the job.

Could Turkey’s rift with the West prompt it to look East?

Until now, Turkey has been largely reliant on western investment and trade. But now there are reports that it is talking to investors in the Gulf to raise capital, as it looks elsewhere for help.

Analysts also believe that the rift with the US, compounded by ongoing tensions with the European Union, could prompt Ankara to look towards Moscow and Beijing.

Russian Foreign Minister Sergei Lavrov is in Turkey on Monday and Tuesday, to pave the way for a summit on Syria involving both countries as well as France and Germany.

There are considerable tensions between Ankara and Moscow over Syria: Erdogan is opposed to the Assad government, which Russia backs. Turkey is reportedly seeking to diversify its energy supplies to become less reliant on gas from Russia.

However, with millions of Syrian refugees in Turkey and the threat of more arriving from Idlib as Assad’s forces close in, Erdogan is in a vulnerable position. Some analysts believe Turkey’s currency crisis gives President Putin an opportunity to strengthen his influence on Turkey.