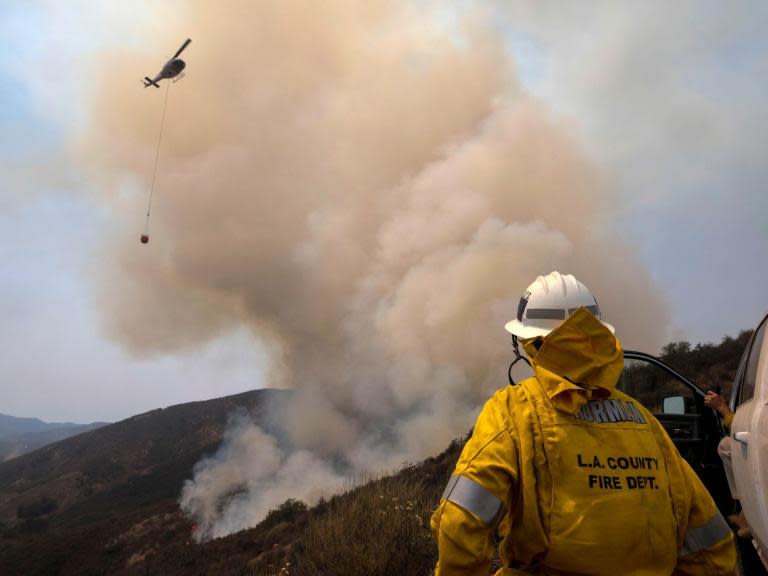 Cooler temperatures have aided firefighters as they begin to turn the tables on a large wildfire that has torn across Southern California.

The Holy Fire was 41 per cent contained by Sunday afternoon after burning over 35.5 square miles of dry timber and brush at Cleveland National Forest, around 100 miles southeast of Los Angeles.

The progress made by crews has been partly attributed to cooler conditions in the area in recent days.

However, firefighters are braces for temperatures to climb towards the 40C mark once again by the end of next week.

“The weather out here in California seems to be cooling down today and over the next couple days, and that should hopefully help firefighters get even more containment,” said Lynne Tolmachoff, of the California Department of Forestry and Fire Protection.

“They should make better progress over the next couple of days.”

The Holy Fire, named after Holy Jim Canyon where it began last Monday, is one of nearly 20 blazes currently burning across California.

The state is beginning to see earlier, longer and more destructive wildfire seasons due to its ongoing drought problems, warmer weather attributed to climate change and construction deeper in forests.

With firefighters beginning to get a better handle on the blaze, a number of evacuation orders were lifted over the weekend for areas previously in the fire’s path, Ms Tolmachoff said.

More than 20,000 people were reportedly told to evacuate at one point in order to avoid the wildfire, which has so far destroyed 16 structures.

Aircraft have made flight after flight, dumping water and bright pink retardant on the blaze to protect Lake Elsinore and other foothill communities near the flames.

The man accused of deliberately starting the fire appeared in court on Friday, but his arraignment was postponed.

Forrest Clark, 51, made several outbursts, claiming his life was being threatened and saying the arson charge against him was a lie.

Elsewhere, the largest fire ever recorded in California, the Mendocino Complex, burning north of Sacramento, destroyed more than 100 homes.

It was nearly 70 per cent contained Saturday, but has already covered some 508 square miles.

The two-week-old Carr Fire that killed eight people and tore through more than 1,000 homes was more than 50 per cent contained on Saturday.

Why are California's mayors lining up to endorse Mike Bloomberg?
2020-01-26