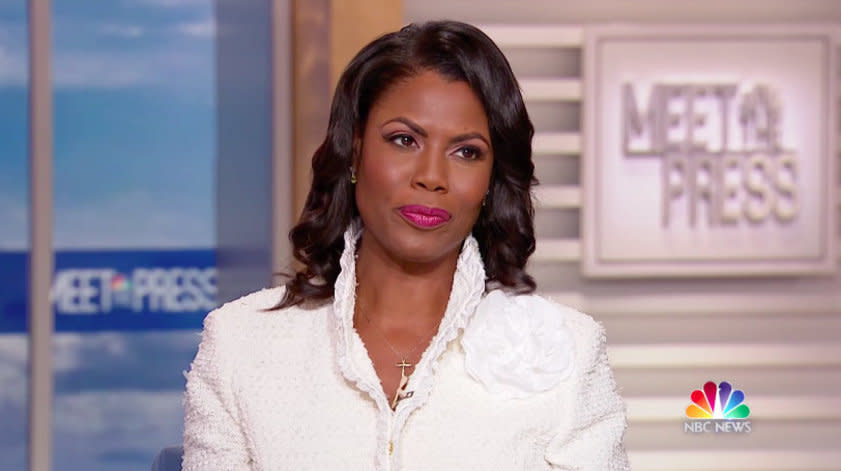 Manigault Newman told host Chuck Todd on NBC’s “Meet the Press” that she was taken into the Situation Room, threatened and told her tenure was ending. She also said the doors were locked. After previously insisting that she “resigned,” Manigault Newman said on Sunday that it was “pretty clear” from the recording that Kelly asked her to leave.

She said she was releasing the recording to correct “the false story” that she attempted to “storm” Trump’s residence after Kelly fired her. The recording played on the program doesn’t seem to indicate how Manigault Newman reacted after her sit-down with Kelly, but the reality TV star-turned-White House aide seemed to think it proved the report wrong.

“I protected myself because this is a White House where everybody lies,” she said of the recording she made. “You have to have your own back.”

During the discussion, listeners can hear Kelly telling Manigault Newman that he had become aware of some “pretty significant integrity issues,” alluding to a “pretty serious offense” that would, if she were a member of the military, spur a court-martial.

″We’re not suggesting any legal action here,” he said. “But… it would be a pretty serious offense.”

He went on to say that he wanted her exit to be a “friendly departure” so Manigault Newman could consider her time at the White House “as a year of service to the nation.”

“And then you can go on without any type of difficulty in the future relative to your reputation,” he added.

Manigault Newman told Todd she considered the reference to her reputation as an “obvious threat.”

During the interview, Manigault Newman also called on the White House to release her human resources record to “bring to light” the claims of integrity violations, brushing off the accusation that she had committed any serious offense.

Manigault Newman did not reveal if she recorded the conversation on her cell phone or with another device, but critics were quick to point out that secretly taping anything in the Situation Room was against the rules and seemed like a security breach.

Alyssa Mastromonaco, who served as deputy chief of staff to President Barack Obama, said cell phones are “totally prohibited” in the conference room.

“This is potentially a national security issue,” she added.

Tommy Vietor, who previously worked as Obama’s National Security Council spokesman, said the recording was against the rules but that the discussion itself was unclassified.

I can’t get that worked up about Omarosa taping Gen Kelly in the Situation Room. Yes, it’s against the rules. Yes, it’s a SCIF. But ultimately the sitroom is just a bunch of conference rooms. He didn’t read the PDB aloud and then fire her it was an unclassified discussion.

Over the years, the Situation Room has also been the site of meetings that didn’t pertain to national security. In 2013, Obama used it to host business leaders and discuss cybersecurity issues because the only other meeting room large enough was booked.

White House press secretary Sarah Huckabee Sanders responded to Manigault Newman’s “Meet The Press” interview, saying the former aide demonstrated a “lack of character and integrity,” and her sneaking a recording device into the Situation Room showed “a blatant disregard for our national security.”

Manigault Newman said she had no regrets over recording Kelly.