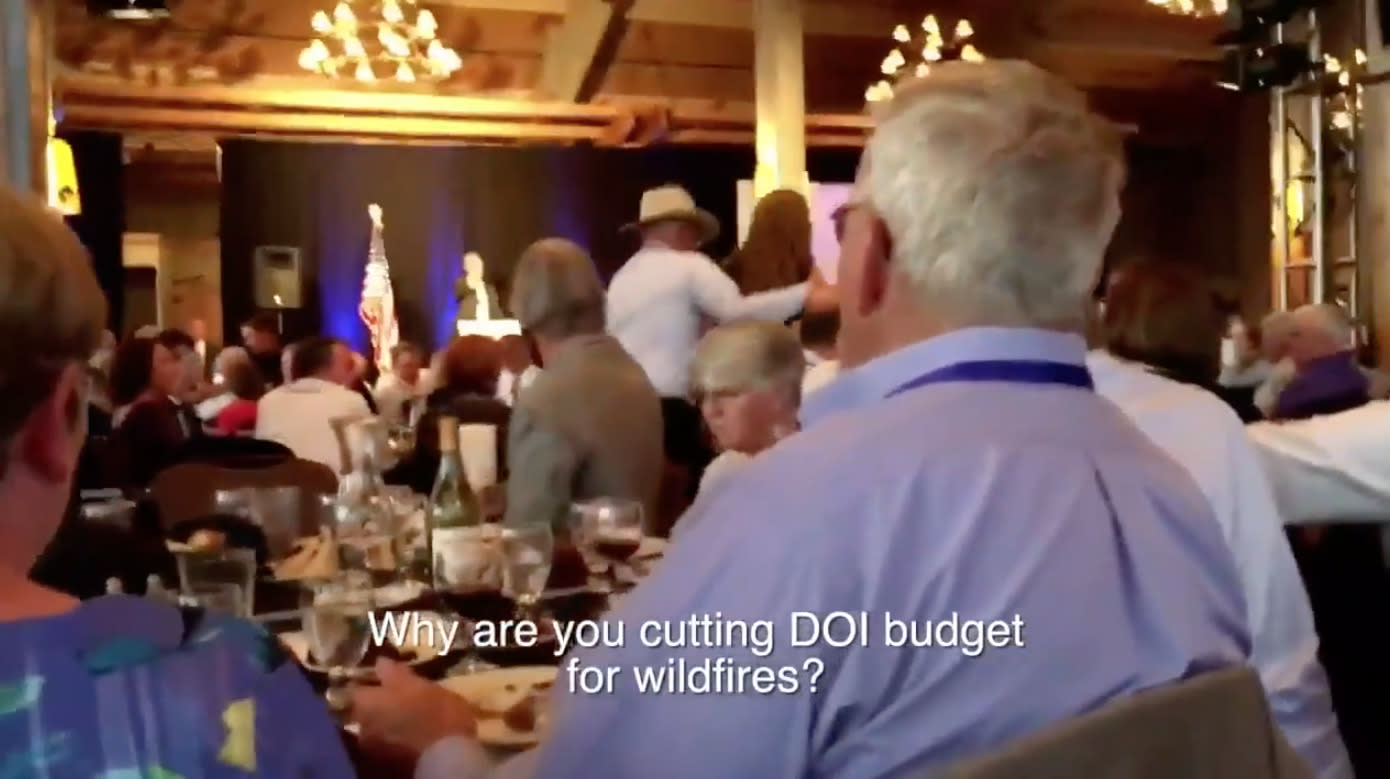 A protester at a Colorado right-wing conference challenged Interior Secretary Ryan Zinke over his failure to recognize the danger of climate change, and he inexplicably blasted her for not “serving.”

It wasn’t clear if Zinke meant serving in the government or the military.

The confrontation occurred Friday in Steamboat Springs at the Freedom Conference, which features “leading conservative thought and policy leaders.”

Local protester Sallie Holmes stood up during a speech by Zinke, calling out: “Why won’t you acknowledge that climate change is causing and accelerating wildfires, even in Routt County?”

Steamboat Springs is located in Routt County in western Colorado, where officials have been battling fires.

Holmes, 27, was immediately escorted out by security as the crowd booed. Zinke angrily shouted: “You know what? You haven’t served and you don’t understand what energy is. I’d like to see your child have to fight for energy.”

Holmes added as she was being led out the door: “Our community is suffering because you will not acknowledge climate change.”

Zinke appeared to be implying that Holmes had no standing to complain about the Trump administration’s position on climate change because she hadn’t “served,” and he assumed she knew nothing about energy.

Interior Department officials did not immediately return phone calls to clarify what Zinke meant by “served” or why that was a prerequisite for Holmes’ comments.

Holmes told Huffpost that she thought Zinke, a former Navy Seal, attacked her for not serving in the military, particularly since he referred to her child “fighting for energy,” perhaps referring to a future war over oil.

“So it’s out there. It’s all about energy and that’s why they need to pillage public lands so we’re energy independent,” she said.

Zinke, at the start of his speech, asked military veterans to stand and joked that serving as a Navy Seal was easier than his current post, because when “people shot at you, I could shoot back.”

When Holmes interrupted him, he was talking about Trump, tariffs and energy. She said she was stunned by Zinke’s anger as he jabbed the air with his finger and yelled at her.

She said it was her first time participating in such a protest. The ticket to get into the event cost her $382, she told HuffPost.

“They wouldn’t give me a seat at the table, so I took it,” said Holmes.

In his Cabinet job, Zinke has been instrumental in gutting Utah’s Bears Ears and the Grand Staircase-Escalante National Monuments while public lands in his home state of Montana were increased. The de-designated public lands are now open to energy and mining corporations.

Some 1,400 protesters gathered at a “Stand for Our Land” demonstration Friday against Zinke and the Trump administration’s policies outside the Routt County courthouse.

Zinke has “attacked our national monuments. He’s putting emphasis on extractive industries like oil and gas and allowing them to get around rules… and he’s attacking the [federal] Land [and] Water Conservation Fund,” event organizer Cody Perry told the Steamboat Pilot & Today.

Thousands of pages of emails released — and almost immediately retracted — last month from the Interior Department revealed that officials dismissed the importance of public lands for tourism, recreation and archeological discoveries. Ryan and aides instead targeted their surveys of protected sites to prioritize the value of ranching, logging, and energy development.

“No one loves public land as much as I do,” Zinke insisted in his Friday speech.