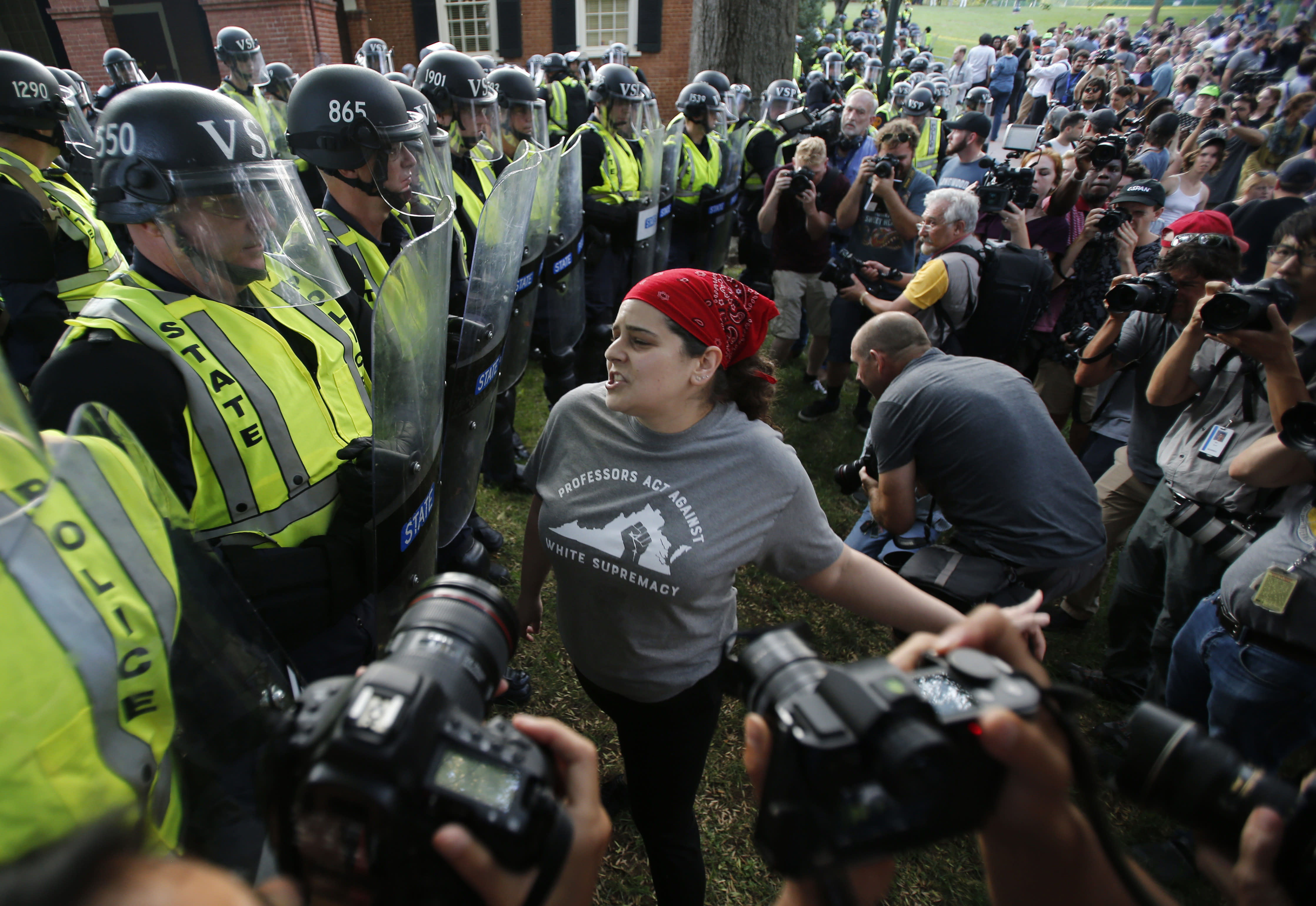 CHARLOTTESVILLE, Va. (AP) — The city of Charlottesville marked the anniversary of last summer’s white supremacist violence that sent ripples through the country with largely peaceful vigils and other events, but police had a brief, tense confrontation with students angry over the heavy security presence there this weekend.

“Why are you in riot gear? We don’t see no riot here,” activists chanted Saturday evening.

Shortly before a pre-planned evening rally to mark the anniversary of a campus confrontation between torch-carrying white nationalists and counterprotesters, activists unfurled a banner that said, “Last year they came w/ torches. This year they come w/ badges.”

A group of more than 200 protesters then marched to another part of the University of Virginia’s campus, where many in the crowd shouted at officers in riot gear who had formed a line.

Kibiriti Majuto, a coordinator for UVA Students United, said the students moved to another part of campus because they didn’t want to be “caged” in the area where the rally had been planned.

“How does that create a sense of community? How are we going to be safe in that situation?” he asked.

Majuto said police “were not on our side” last year when white supremacists surrounded counterprotesters on the rotunda.

“Cops and Klan go hand in hand,” he said.

Charlottesville city councilman Wes Bellamy said he tried to diffuse the situation and told the police commander that the students were upset by the officers’ tactics, calling the officers’ riot gear “over the top.”

After a few minutes, most of the demonstrators began to walk away. There were no immediate reports of arrests on campus.

The rest of the day had been much quieter.

In the popular downtown shopping district Saturday morning, law enforcement officers outnumbered visitors. Concrete barriers and metal fences had been erected, and police were searching bags at two checkpoints where people could enter or leave.

“It’s nice that they’re here to protect us,” said Lara Mitchell, 66, a sales associate at a shop that sells artwork, jewelry, and other items. “It feels good that they’re here in front of our store. Last year was a whole different story. It looked like a war zone last year compared to what it is today.”

On Aug. 12, hundreds of white nationalists — including neo-Nazis, skinheads and Ku Klux Klan members — descended on Charlottesville in part to protest the city’s decision decided to remove a monument to Confederate Gen. Robert E. Lee from a park.

Violent fighting broke out between attendees and counterprotesters that day. Authorities eventually forced the crowd to disperse, but a car later barreled into a crowd of peaceful counterprotesters, killing 32-year-old Heather Heyer.

The day’s death toll rose to three when a state police helicopter that had been monitoring the event and assisting with the governor’s motorcade crashed, killing two troopers.

Among the remembrance events that occurred Saturday was a “morning of reflection and renewal” at UVA that featured musical performances, a poetry reading and an address from University President James Ryan.

Ryan recalled how a group of students and community members faced off against the white supremacist marchers near a statue of Thomas Jefferson on campus, calling it a “remarkable moment of courage and bravery.”

Clara Carlson was one of those counterprotesters. Carlson, 22, said she feared for her life when she and a group of her friends were surrounded by the phalanx of young white men at the statue.

Carlson’s group locked arms and chanted slogans of their own, including “Black Lives Matter!” and “No Nazis, No KKK, No Fascist USA!”

Carlson said police didn’t intervene to help her or her friends that night last year.

“I remember the police just standing around. They weren’t there to protect us,” she recalled. “I was grateful that I was able to come out of that alive.”

Some community activists were concerned that this year’s heavy police presence could be a counterproductive overreaction.

An independent investigation of the rally violence, led by a former federal prosecutor, found the chaos last year stemmed from a passive response by law enforcement and poor preparation and coordination between state and city police.

“Last year, I was afraid of the Nazis. This year, I’m afraid of the police,” Woolfork said. “This is not making anyone that I know feel safe.”

But others said Saturday they were comforted by the security measures.

Kyle Rodland, who took his young sons to get ice cream downtown, said he felt much safer than last year, when he left town with his family and stayed with his parents after seeing people armed with long rifles walking around outside his home.

Events marking the anniversary were also expected Sunday in both Charlottesville and Washington, D.C., where Jason Kessler, the primary organizer of last summer’s rally, has obtained a permit for a “white civil rights” rally.

Heyer’s mother, Susan Bro, said in an interview with The Associated Press that she has been dreading the anniversary of her daughter’s death for months.

Bro likened losing a child to standing in shallow water as waves roll continually in.

“You let the wave wash over, and you don’t chase it. You let it go and you’re OK until the next one comes,” she said. “But today, I feel like high tide is in.”

For the complete AP coverage marking one year since the rally in Charlottesville, visit https://apnews.com/tag/CharlottesvilleAYearLater