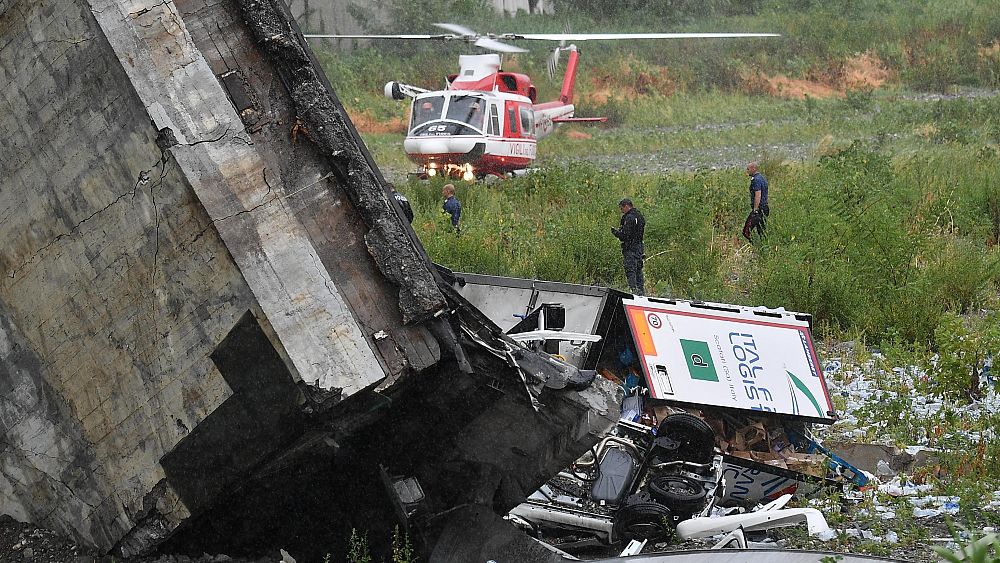 ROME — A highway bridge collapsed during a sudden and violent storm in Italy’s northern city of Genoa on Tuesday.
Authorities said part of the Morandi Bridge fell during torrential rainfall around 11:30 a.m. local time (5:30 a.m. ET). Around 200 firefighters were sent to the scene.Italian news agency Adnkronos quoted the head of the local ambulance service as saying “dozens” of people had been killed. The death toll could not immediately be confirmed by NBC News.The section of the A10 toll highway that collapsed was elevated over a river and a portion of the city of Genoa.Genoa resident Davide di Giorgio was shooting a video of the stormy weather and captured the moment when the bridge collapsed.”I was actually filming the rain so that I could send the video to my parents,” di Giorgio told NBC News. “Suddenly the bridge collapsed in front of me, I couldn’t believe it. That’s one of the most important bridges in the city. Genoa is now cut in half.”An witness told Sky Italia television he saw “eight or nine” vehicles on the bridge when it collapsed in what he described as an “apocalyptic scene.”

Transport Minister Danilo Toninelli said in a tweet that he was “following with great apprehension what seems like an immense tragedy.”The bridge was built in the 1960s, with additional work carried out on it in 2016.Claudio Lavanga reported from Rome, and Yuliya Talmazan from London.