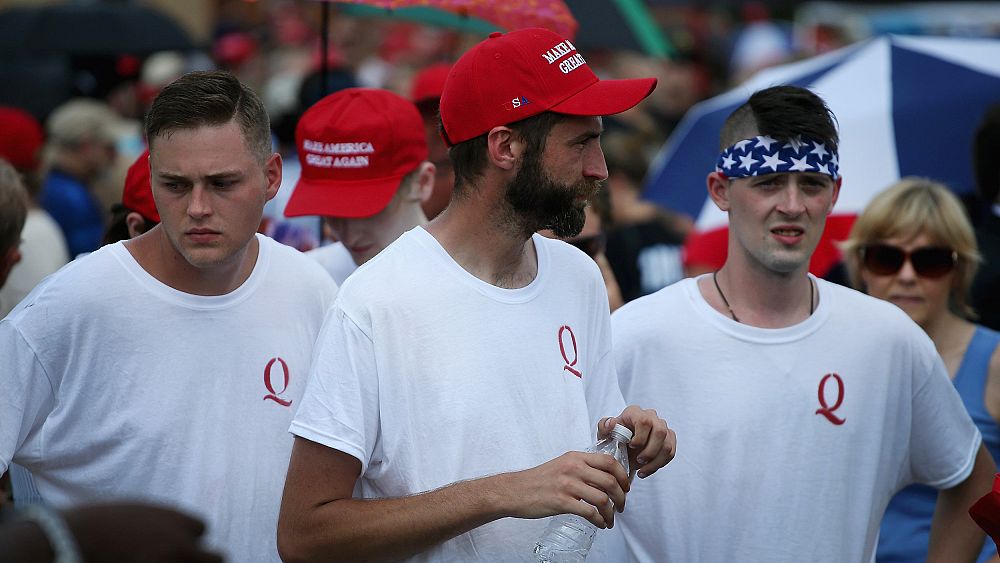 A secret civil war is going on — or at least, it is in the minds of some U.S. citizens. At recent Trump rallies, people have been observed publicly expressing support for “Q”: An anonymous person or group that claims to have access to top-level security information about a secret cabal of corrupt elites, intellectuals, left-wing politicians and celebrities conspiring to exploit and even enslave people. President Donald Trump, apparently, is one of the few people willing and able to fight this secret conspiracy, often referred to as “Qanon.”

If it sounds crazy, that’s because it is. The mostly right-wing conspiracy theory makes a series of mind-blowing allegations that include Democrat-run centers for pedophiles and Satanic cults. The theory first appeared on various online message boards like “8Chan,” where followers shared “bread crumbs” — clues — about the dark and powerful forces that supposedly run their country.

The theories are so wild at this point that some conspiracy-friendly members of the far right are pushing back on them and even banning them from popular online forums. We don’t know which person or persons originated the theory (yet), or what their motivations may have been. What we do know is that the theory is spreading. And more generally why.

It would be tempting to dismiss those who believe such bizarre ideas as mentally ill. But in reality, conspiracy beliefs such as Qanon are neither pathological nor novel.

It would be tempting to dismiss those who believe such bizarre ideas as mentally ill. But in reality, conspiracy beliefs such as Qanon are neither pathological nor novel. Putting aside the fact that some conspiracy theories turn out to be true (e.g., Watergate is arguably an example of a real conspiracy), even fact-free conspiracy theories can be followed by people who otherwise behave relatively normally.

Widespread support for conspiracy theories is also not simply a symptom of our modern digital society. In the dark ages, witch hunts were based on the belief that young women gathered in the woods to conspire with the devil, and many traditional societies still accuse enemy tribes of sorcery to harm or control them. The fear that evil forces conspire to hurt good people is deeply rooted in the human psyche.

I have studied the psychological motivators of conspiracy beliefs for many years. Based on my research, I believe there are three main reasons why people believe in theories like Qanon. First, accepting one conspiracy theory as true makes it much easier to believe in other theories. Studies from the mid-1990s found that the single best predictor of conspiracy thinking is the belief in a different conspiracy theory.

In a recent study conducted by myself, Karen Douglas and Clara De Inocencio, we further investigated why this could be the case. Our conclusion? Conspiracy theories reinforce a belief that nothing in the world happens through coincidence. This refusal to recognize the role of chance leads people to develop a worldview in which hostile and secret conspiracies permeate all layers of society.

Feelings of anxiety and uncertainty also help fuel conspiracy theories. Such emotions function as a psychological warning signal, leading people to try and make sense of societal events that frighten them. This helps to explain the widespread (and ongoing) speculation that followed impactful events such as 9/11or the assassination of President John F. Kennedy. Together with Nils Jostmann and Michele Acker, we found that feelings of uncertainty, coupled with the feeling that your life is not fully in your control anymore, increases conspiracy thinking. Studies by others researchers confirm that emotions reflecting uncertainty — such as fear or worry — can increase conspiracy beliefs.

Feelings of anxiety and uncertainty also help fuel conspiracy theories. Such emotions function as a psychological warning signal, leading people to try and make sense of societal events that frighten them.

Human brains are hard-wired to protect their own group against competing groups, and therefore more easily attribute the actions of competing groups to conspiracies. One of our most recent studies found members of ethnic minority groups facing actual discrimination by a majority group are relatively susceptible to conspiracies: “Feelings of deprivation lead marginalized minority members to perceive the social and political system as rigged, stimulating belief in both identity-relevant and irrelevant conspiracy theories.”

To some extent, we may all occasionally perceive a conspiracy where there is none. But this makes it even more important to take this phenomenon seriously. Conspiracies can have real consequences — the2016 Pizzagate incident illuminates the dangers of believing in unsubstantiated online claims, even when they seem bizarrely implausible. In this case, the rumor circulating was that prominent Democrats, including Hillary Clinton, were running a child-sex ring out of a Washington D.C. pizzeria.

Going forward, helping citizens distinguish fact from fiction is going to be an increasingly important challenge. Debunking conspiracy theories when and where they appear is helpful, but it cannot just be the media or the political leadership who are providing this information. We have to understand the psychological triggers and motivations if we want to mitigate the influence and potential dangers of this kind of thinking. Because the truth is that conspiracy theories will always thrive when people feel like they are not in control of their lives, and when significant tension exists between societal subgroups.

Jan-Willem van Prooijen is an associate professor in the Department of Experimental and Applied Psychology at VU Amsterdam, and a senior researcher at the Netherlands Institute for the Study of Crime and Law Enforcement (NSCR).

Is The Market Grossly Underestimating The Potential Impact Of The Coronavirus Epidemic?
2020-01-27