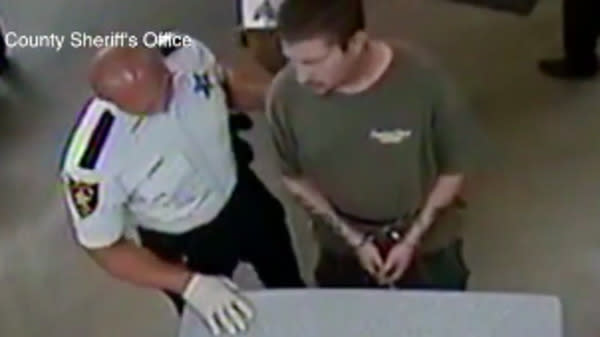 A Florida man who invoked the state’s controversial “stand your ground” law last month to defend fatally shooting a 28-year-old father of three following an altercation over a parking space has been charged with manslaughter.

Michael Drejka, 48, was arrested Monday after the state attorney’s office for Pinellas and Pasco counties filed the criminal charge against him for killing Markeis McGlockton in a convenience store parking lot in Clearwater.

Police had originally decided not to arrest Drejka, citing Florida’s stand-your-ground law, which allows gun owners to use deadly force if they feel they are facing “imminent death or great bodily harm.” The case was then referred to state prosecutors to decide whether charges would be brought.

Surveillance video captured Drejka firing his weapon at McGlockton outside the convenience store on July 19.

The dispute began after McGlockton left his car idling in a handicap space while he ran into the store to purchase snacks, his girlfriend Britany Jacobs told ABC’s “Good Morning America.” Jacobs was waiting in the car with their two children when Drejka approached and began “harassing” her for parking in a handicap spot without a permit, she said. McGlockton came over and shoved Drejka to the ground, according to Jacobs. That’s when Drejka, still on the ground, shot McGlockton in the chest, she said.

McGlockton was pronounced dead at a hospital 30 minutes later.

“He wanted somebody to be angry at,” Jacobs said of Drejka. “He just wanted someone to fight him. He was picking a fight.

ABC reported that the owner of the convenience store, who was not named, has previously called the police to report Drejka for confronting customers over parking spaces.

The stand-your-ground law, which Florida adopted in 2005, drew intense scrutiny after the 2013 acquittal of George Zimmerman in the shooting death of unarmed 17-year-old Trayvon Martin. Though Zimmerman did not invoke the statute in his defense, the judge instructed the jury on the law, and it was cited by a juror after the trial as a factor in the jury’s deliberations.