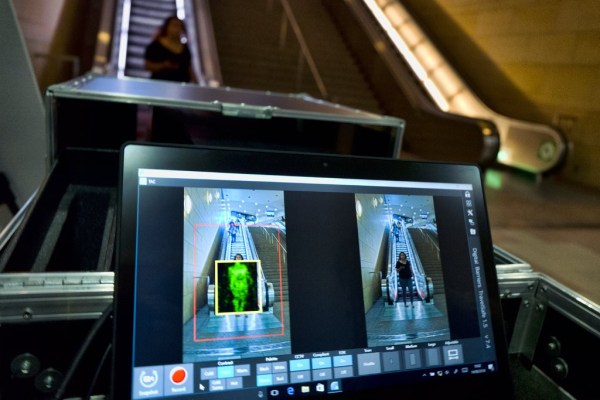 The Los Angeles County Metropolitan Transportation Authority just announced its plans to become the first city to use portable body scanners in its subway and light-rail systems to help detect the presence of explosive devices.

The portable scanners will begin rolling out in a few months time, the executive director of security for the LA Metro Alex Wiggins said yesterday. According to the AP, the scanners will be able to conduct full-body scans from 30-feet away and are capable of scanning over 2,000 passengers per hour.

The machines, designed by the company Thruvision and costing $100,000 each, will project radio waves to create a visualization on a split-screen display that enshrouds “clean” passengers in bright-green and suspicious items in black.

The city is one of several in which the TSA has piloted these new body scanners, although LA will be the first to fully adopt them. The agency has also worked with public transit officials from San Francisco’s Bay Area Rapid Transit, New Jersey’s transit system, as well as Amtrak stations at New York’s Penn Station and DC’s Union Station. Wiggins assured passengers that screenings in the LA Metro would be well marked and that those choosing to opt out could do so by leaving the station.

These automated options appear to be a definite step-forward in protecting the 10.1 billions trips taken on public transit in America last year, however they are still no replacement for increased security personnel at these transportation hubs. Incidents, like the murder of Nia Wilson in a BART station this summer, would not be detected by these scanners but are preventable acts of violence nevertheless.

As transportation security continues to become more sophisticated, it will be important to enhance not only the technology but the training and use of officials as well.