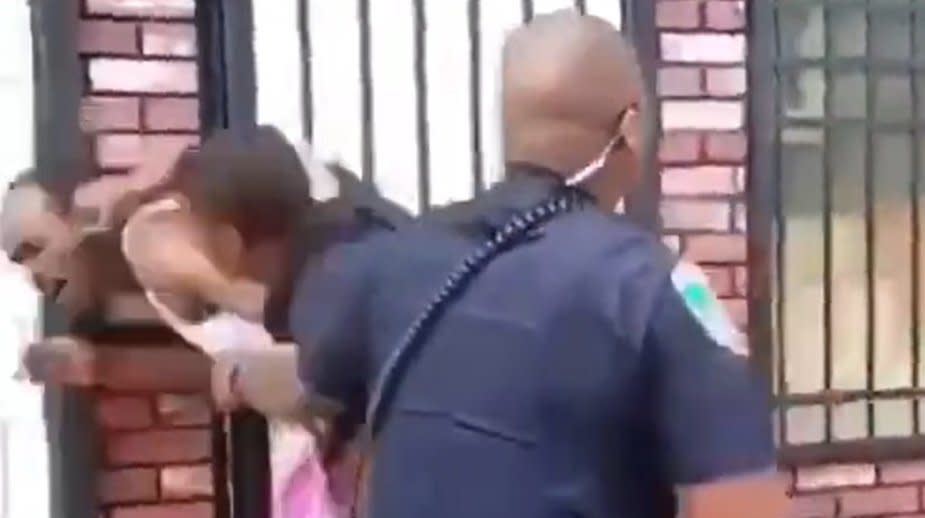 Two days after resigning from the Baltimore Police Department, a police officer who was caught on video repeatedly punching a man and throwing him to the ground has been charged with felony assault.

Williams, who resigned from the force on Sunday, was reported to have turned himself in.

“It is important that the community knows there is one standard of justice, no matter your sex, race religion, or occupation,” Mosby said in a statement. “Police officers are sworn to protect and serve and when that oath is taken for granted and an abuse of that power is evident, we will hold them accountable to the fullest extent of the law.”

Williams had been working in the 2500 block of Monument Street with his partner on Saturday when the violent confrontation occurred.

Police said 26-year-old Dashawn McGrier refused to provide identification to the two officers, causing the encounter to “escalate.” Williams was caught on camera punching McGrier, then throwing him to the ground. McGrier did not appear to resist. He suffered a fractured jaw and ribs, among other injuries, his lawyer said.

Williams and McGrier had clashed before. In June, McGrier was accused of assaulting the officer. McGrier is contesting the charges.

Interim police Commissioner Gary Tuggle said Williams should not have been influenced by the June incident in his latest encounter with McGrier.

“If it were borne out of emotion, we are trained — we should be trained — to never act in an emotional way, particularly when it comes to engaging with citizens,” Tuggle told The Baltimore Sun.

Earlier, Tuggle described the video as “disturbing” and “disappointing.”

Sandra Almond Cooper, president of the Baltimore chapter of the NAACP, told the Sun the charges against Williams were appropriate. She said his partner, who was not charged with a crime and has been placed on administrative duties, should also be held responsible for failing to stop the attack.

“He should’ve stopped him before it was so bad,” Cooper said.