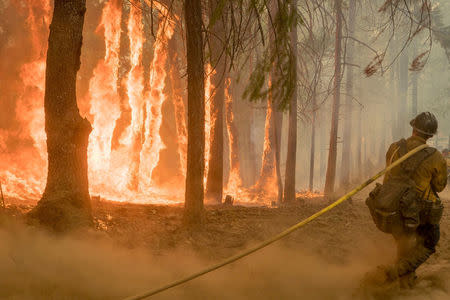 LOS ANGELES (Reuters) – The heart of Yosemite National Park in California, shut down for nearly three weeks due to a deadly wildfire, was reopened to visitors on Tuesday, but smoke limited visibility and a key route to the park’s best known landmarks remained closed.

The reopening of Yosemite Valley, by far the most heavily touristed area of the park, came as firefighters continued to make slow, steady progress containing the last hot spots of the Ferguson Fire, which erupted July 13 at the edge of Yosemite.

The blaze, one of the largest of dozens that have burned across California this summer, has charred nearly 97,000 acres around the park’s northwestern corner, but fire crews have carved containment lines around 86 percent of its perimeter.

The park closure has taken a major toll on the area’s local economy. Some 4.3 million visitors spent an estimated $452 million last year, most of that during the summer.

The road into Yosemite Valley was reopened on Tuesday for the first time since July 25, along with two highways into the park. But the north-south entrance route, Highway 41, remained closed, along with a road to the famed Glacier Point overlook and the Merced Grove of giant sequoia trees.

Visitors were cautioned to expect smoke to obscure visibility in Yosemite Valley, site of such attractions as Bridalveil Fall and the towering granite monoliths of El Capitan and Half Dome.

Two firefighters were killed last month by the Ferguson, one of three California wildfires that have proven fatal this season.

The Mendocino Complex, raging at the southern end of the Mendocino National Forest since July 27, claimed the life of a firefighter from Utah on Monday, even as containment of the blaze rose to 68 percent.

That conflagration has now scorched more than 354,000 acres, the most consumed by a single wildfire on record in California, and destroyed at least 288 structures, about half of them homes.

Three other firefighters perished while battling the devastating Carr Fire, which also killed four civilians and a utility worker and burned more than 1,500 structures. The Carr fire stood at 65 percent containment after blackening 207,000 acres.

This summer ranks as one of California’s worst fire seasons, as numerous blazes burned with extraordinary intensity and speed across the drought-parched state, stoked by erratic winds and record temperatures.

Tens of thousands of residents have been displaced, and large regions have endured weeks of unhealthy air quality from smoke and soot.