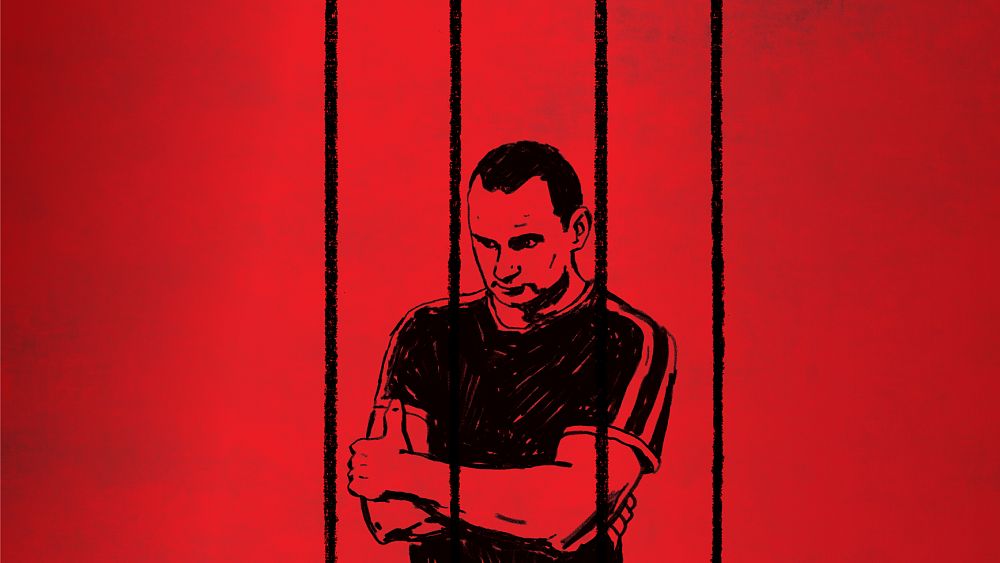 Oleg Sentsov, a 42-year-old Ukrainian film director and outspoken critic of the Russian occupation of Crimea was arrested in May, 2014, and sentenced to twenty years in a high-security facility on charges of terrorism.
Sentsov commenced a hunger strike on 14 May 2018 for an indefinite period of time demanding the release of all Ukrainian political prisoners in Russia.

But who are they?

Sentsov himself is recognized as a political prisoner by numerous NGOs, including Amnesty and the Russian human-rights organisation Memorial, which currently reports as many as 183 people are in prison for their political and religious beliefs.

Sergei Davidis, the head of the support programme for political prisoners from Memorial told Euronews that the largest persecution in Russia is religious.

The 46-year-old expat was detained in the city of Orel, in Western Russia while reading the Bible with other believers.

The Russian Supreme Court declared Jehovah’s Witnesses, a Christian denomination, an “extremist” organisation in April last year. Jehovah’s Witnesses are being persecuted as 22 followers of this faith are now in jail for “carrying out extremist activities”, and at least 9 are under house arrest.

Christensen has been in jail for about a year and a half, but the European Association of Jehovah’s Witnesses told Euronews that they don’t harbour any illusions of a positive outcome.

“What is happening in the Russian Federation is called religious persecution,” said a representative of the association, Yaroslav Sivulsky.

He told Euronews “We observe the complete refusal of the Russian Federation to respect human rights, namely the right to freedom of conscience and freedom of religion.

In April 2017, the Supreme Court of the Russian Federation recognized the organisation Jehovah’s Witnesses as extremist. In addition to the main department of the organisation in St. Petersburg, about 400 regional offices were closed.

Paul Gillies, international spokesman for Jehovah’s Witnesses at their world headquarters in New York told Euronews, “while it is impossible for us to project if Dennis Christensen will be released or not, we are confident that he is not guilty of any criminal offence related to his activity as one of Jehovah’s Witnesses.

The fact is, the Supreme Court ruling only liquidated our legal entities and Russian authorities have maintained that individual Witnesses are free to practice their faith.”

In the winter of 2016, six people, including the Crimean Tatar human rights activist Emir-Usain Kuku, were arrested due to being part of the religious-political organization Hizb ut-Tahrir, which since 2003 was recognized as a terrorist organisation in Russia.

The group is banned in Russia but legal in Ukraine.

According to the prosecution, the group held meetings where they studied the literature of Hizb ut-Tahrir, discussed relations between Russia and Ukraine and planned to overthrow the current government.

The chairman of the Muslim community faces a life sentence; the rest, prison terms up to 20 years.

The arrested men and their supporters say the case is politically motivated. According to the Crimean Tatar leaders, this is part of a repressive campaign launched by the security forces against those who disagree with Russia’s policy.

Ilmi Umerov, deputy head of the Crimean Tatar Majlis told Euronews “They were involved in the Hizb ut-Tahrir case, and now they added an attempt to seize power,” said. “How could these six ordinary workers claim to seize power in the Russian Federation?”

Moscow’s takeover of Crimea in March 2014 was vocally opposed by many Crimean Tatars, who are a sizable minority in the region.

Russian President Vladimir Putin promised in 2014 that Russia would treat the mostly Muslim minority well and would address what he claimed were rights issues ignored or mishandled by the Ukrainian authorities.

Davidis told Euronews, “Hizb ut-Tahrir is a fundamentalist Islamic organization, but it is emphatically committed to peaceful means.”

“For many years these people have been persecuted and imprisoned only for conducting ephemeral conversations about Islamic doctrine and the impending caliphate.”

The head of the Chechen branch of the human rights organisation Memorial, Oyuba Titiev was detained in January this year, in the village of Kurchaloy of the Chechen Republic for the possession of drugs.

“When the car was inspected in its cabin by policemen, a polymer bag with a substance of vegetable origin with a specific smell of marijuana weighing approximately 180 grams was found,” the Interior Ministry said.

According to Tetiev himself, drugs were planted on him.

According to Davidis, the case of his colleague is one of the most blatant examples of politicised justice: “This is not just a political persecution, but a persecution of a human rights defender who defended the rights of others.

“This is a particularly dangerous act,” he told Euornews.

Titiev recorded violations of human rights in Chechnya, among his investigations – reports on the destruction of houses of people declared by Chechen terrorists, and investigation of the situation with representatives of the LGBT community.

“All the activities of the Memorial were irritating to the Chechen authorities,” Davidis told Euronews, “[Chechen leader Ramzan] Kadyrov and his assistants have repeatedly stated that Memorial is bad news and their activities are harmful.”

In March 2017, Russia witnessed its largest public protests in years. However, investigations into the events of that day are being used to punish participants.

According to different reports, between 36,000 and 88,000 people in 97 cities took part in the country-wide anti-corruption protest.

In Moscow, 1,043 people were detained. Since last year, nine have faced criminal prosecution.

All of them have been charged under Article 318 of Russia’s Criminal Code for using force against police officers.

Seven people were sentenced to prison terms of between 18 months to three years, eight months.

Stanislav Zimovets is an activist from the nationalist Resistance movement, and is a veteran of the Chechen war. Prior to his arrest, Zimovets was fined 2,000 roubles for not following the lawful request of a police officer during the protests.

He was arrested a week after the protest.

At first Zimovets pleaded guilty, but later refused to testify. He admitted throwing a brick when he saw mass detentions being carried out but claimed that he was not aiming at anyone intentionally.

Human rights organisations recognise him as a political prisoner, as he was convicted solely in connection with the non-violent exercise of his right freedom of peaceful assembly.

Still in prison, according to Memorial, he is currently on a hunger strike in support of political prisoner Oleg Sentsov.