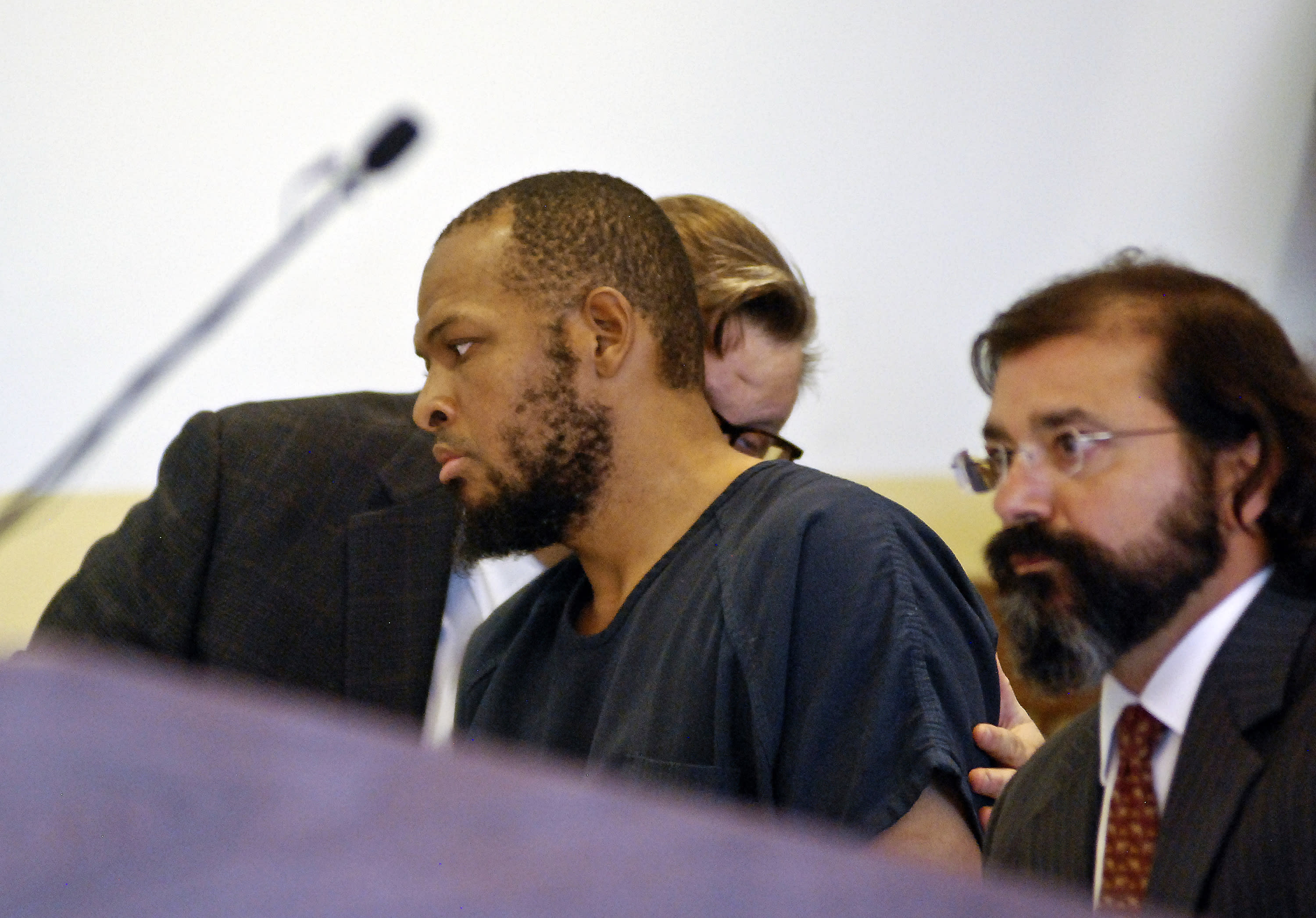 Siraj Ibn Wahhaj, center, confers with one of his attorneys at a first appearance in New Mexico district court in Taos, N.M., on Wednesday, Aug. 8, 2018, on accusations of child abuse and abducting his son from the boy’s mother. Authorities were waiting to learn if human remains found at a disheveled living compound were those of Wahhaj’s missing son. Authorities also allege Wahhaj was conducting weapons training with assault rifles at the compound near the Colorado border where they say they found 11 hungry children living in filthy conditions in a raid Friday. (AP Photo/Morgan Lee)

TAOS, N.M. (AP) — The Latest on 11 children found living in a filthy, makeshift compound in New Mexico (all times local):

An attorney for a woman charged with child abuse in a raid on a makeshift living compound in northern New Mexico says she believes her client has been taken into custody by federal immigration authorities.

Attorney Kelly Golightley says she has reason to believe Jany Leveille no longer is in Taos at the county’s detention facility and appears to be in federal custody.

A regional spokeswoman for Immigration and Customs Enforcement could not immediately determine whether Leveille had been detained by the agency.

Leveille was among five adults detained in the raid.

A state judge on Monday cleared the way for the release of the adults to house arrest pending trial.

Golightley could not provide information about the citizenship or immigration status of the 35-year-old client.

New Mexico state court officials say a judge has received threats of violence after a ruling that allows the release of five defendants accused of child abuse in connection with a raid on a ramshackle compound near the Colorado state line.

Administrative Office of the Courts Director Artie Pepin said Tuesday said that Judge Sarah Backus has come under attack through social media, emails and telephone calls in response to a pre-trial ruling that allows the release of two men and three women. One telephone caller threatened to slit the judge’s throat, while others made derogatory insults.

Backus says prosecutors presented troubling information Monday in court about the defendants but failed to articulate any specific danger to the community.

Pepin says a judge’s responsibility is to make impartial decisions based on evidence in court and not popular sentiment from other information.

New Mexico Gov. Susana Martinez and other state Republicans are criticizing a judge’s decision to allow the release of defendants accused of child abuse at a ramshackle desert compound where authorities found the remains of a boy.

The decision came even though prosecutors warned that the extended family had been training for an armed, anti-government mission.

The father of a boy kidnapped in Georgia would not be released because an arrest warrant has been issued for him in that state.

State Republican Party Chairman Ryan Cangiolosi on Tuesday described the decision to allow the release as “absurd” and said he believes the suspects pose a danger to the public and are a flight risk.

Democratic Judge Sarah Backus set a $20,000 bond for each defendant and ordered them to wear ankle monitors when released. They are forbidden to hold firearms.

Martinez also renewed her criticism of new state rules for pre-trial release that set a high standard of proof for holding suspects without bond.

A state judge has denied a request by prosecutors to keep in jail the two men and three women who were arrested during a raid at a New Mexico compound as they await trial on child abuse charges.

The decision came Monday evening after a lengthy hearing in Taos during which prosecutors said the five defendants were preparing for a dangerous anti-government mission.

They presented evidence of the firearms training done by Siraj Ibn Wahhaj (see-DAHJ’ wah-HAJ’) and described a compound fortified by old tires and wooden pallets.

Judge Sarah Backus said although she was concerned by “troubling facts,” prosecutors failed to articulate any specific threats to the community.

She set a $20,000 bond for each and ordered that they wear ankle monitors and have weekly contact with their attorneys.

Authorities say the father of a missing boy whose remains were found following a raid of a New Mexico compound had performed rituals in an attempt to rid the disabled child of demons before the child died.

FBI Agent Travis Taylor testified Monday during a court hearing in Taos that one of the 11 children found at the makeshift compound and taken into custody said during an interview that the boy, Abdul-ghani Wahhaj (ahb-DOOL’ GAH’-nee wah-HAJ’), had died in February.

His father, Siraj Ibn Wahhaj (see-DAHJ’ wah-HAJ’), is one of the five adults arrested at the compound on child abuse charges.

Public defenders argue Wahhaj was trying to heal the boy by reading passages from the Quran. Prosecutors argued that Wahhaj was denying the boy medication.

Defense attorneys for the two men and three women arrested on child abuse charges following a raid at a northern New Mexico compound argue that prosecutors are unjustly trying to paint their clients as armed militants.

The attorneys’ objections came Monday as officials with the Taos County Sheriff’s Office testified about the recent raid, when the five adults were arrested and 11 children were found living in filthy conditions.

Public defenders also argued that the rifles and handguns found on the property are common guns that can be bought at retail stores and that their clients made no aggressive efforts to defend their compound as authorities closed in to serve search warrants earlier this month.

Prosecutors are asking that Siraj Ibn Wahhaj and the other defendants be held pending trial.

Authorities testified during the hearing about the tires, wooden pallets and earthen walls that made up the compound. They also described the shooting range that was on the property.

State prosecutors say children who were found at a ramshackle New Mexico compound were trained to use firearms and learned other tactical techniques as they prepared to get rid of teachers, law enforcement and other institutions that were considered corrupt.

The prosecutors provided more details about the accusations during a court hearing Monday in which they asked that Siraj Ibn Wahhaj and four other defendants be held pending trial on child abuse charges.

The defendants were arrested and 11 children were taken into custody during a raid Aug. 3 on the compound near the Colorado state line.

Wahhaj and the others were seated with their public defenders in a Taos courtroom as prosecutors presented books that were found at the compound, documents related to Wahhaj’s trip to Saudi Arabia and a handwritten notebook that appeared to be some kind of teaching manual.

They also pointed to evidence that Wahhaj had taken a series of firearms courses while in Georgia.

Public defenders argued that they didn’t have enough time to review the evidence, but the judge allowed the hearing to continue.

A court hearing is planned on allegations that children at a remote compound in northern New Mexico may have been trained in the use of firearms in preparation for a school shooting.

Two men and three women were scheduled to appear in New Mexico state district court Monday on accusations of child abuse. They were arrested and 11 children were detained during an Aug. 4 raid on a squalid makeshift living compound near the Colorado state line.

Public defenders are calling into question the credibility of information that links defendant Siraj Ibn Wahhaj to firearms training for children.

Wahhaj is accused of abducting his son from Georgia in December. The body of a small boy was retrieved from the compound a week ago and has not been identified by medical examiners.