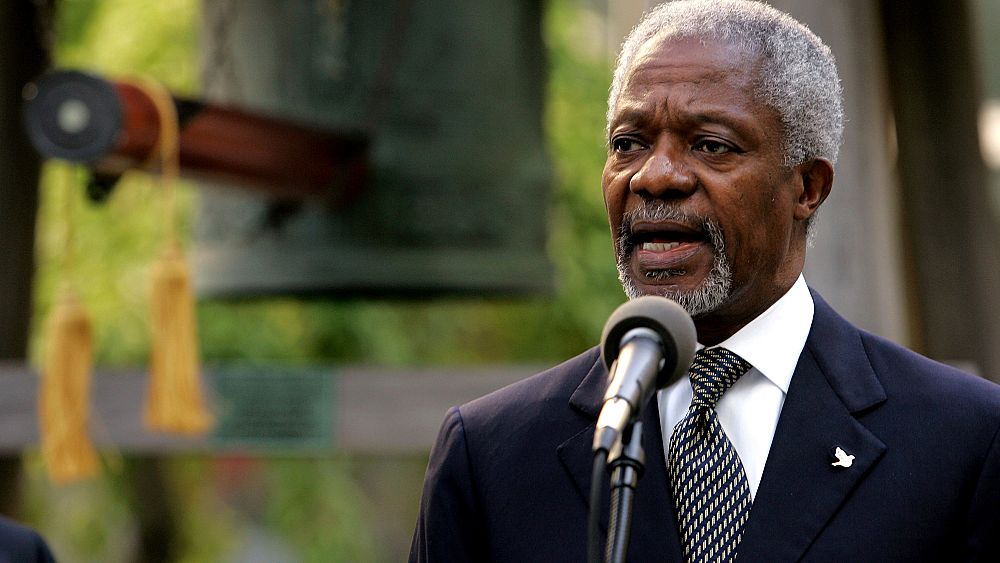 Tributes from around the have been paid to Kofi Annan, the Nobel Peace Prize winner and former Secretary-General of the United Nations, who died aged 80 on Saturday after a short illness. His home country, Ghana, declared a week of national mourning.
He served two terms as UN chief between 1996 and 2006.

Ravina Shamdasani, the spokeswoman for the UN Office of High Commission for Human Rights, said Annan was a life-long believer in the organisation:

“I think we will remember Kofi Annan most for his dedication to peace and human rights, to his unfailing belief that diplomacy, dialogue, and just that the United Nations works, that we can avoid conflicts, that we can resolve conflicts and that we should never give up. We need to keep pushing. We need to keep advocating for human rights even in the face of seemingly impossible obstacles.”

Admirers who took to Twitter to pay their respects:

Kofi Annan was the first black African to lead the United Nations and the first to come from the UN’s own ranks. As he led the world into the new millennium he made a big impression, although he didn’t always agree with the actions of the most powerful countries, calling the 2003 invasion of Iraq “illegal.”

“We were filled with pride to see an African leader dealing with world problems and finding solutions for them, so we dip our heads to him in great memory of him,” said the President of South Africa, Cyril Ramaphosa.

Kofi Annan led the world in to the new millennium, making a big impression on the diplomatic stage, although he didn’t always agree with the actions of the most powerful countries, calling the 2003 invasion of Iraq “illegal.”

Passing on the baton to Ban Ki-Moon in 2006 he described the UN chief’s post as the most impossible on earth, adding that it was also the best possible job.

Recent polls indicate Bernie Sanders has a narrow lead going into the Iowa caucuses, but the contest is still largely up for grabs
2020-01-26