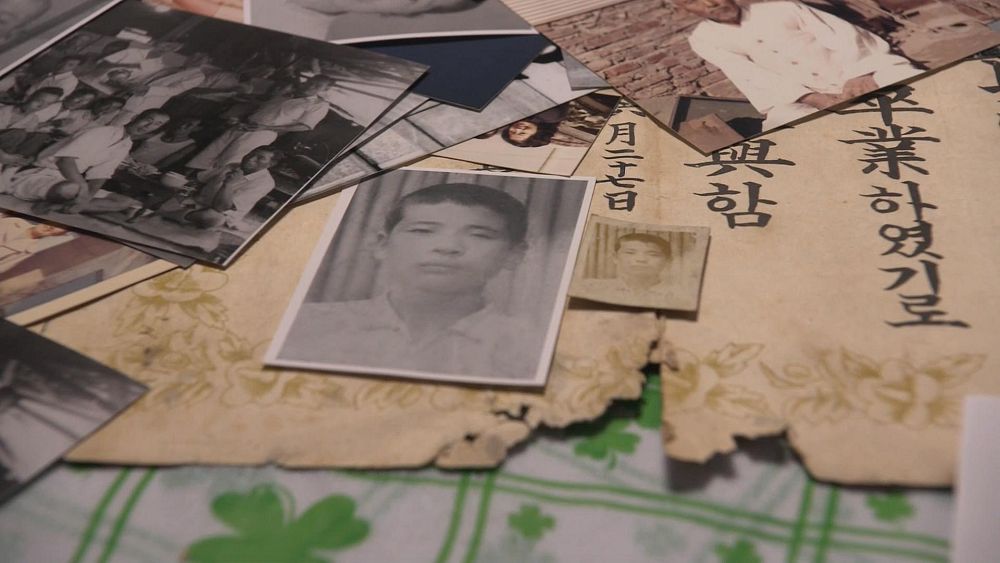 SEOUL, South Korea — After 67 years, Lee Soo-nam didn’t think he’d ever see his older brother again.His brother was conscripted into the North Korean Army in August 1950, Lee told NBC News.”They took him away just like that,” he said. “I had given up on seeing him because so much time has passed, and even if he survived the war, I thought he’d likely died of natural causes by now.”Despair turned to hope for Lee when he received a call from the Red Cross earlier this year saying that his older brother was still alive, and that he would be allowed to meet with him.”At first I cried, wondering: Is this for real? Am I dreaming? I needed to see him with my own eyes to believe it,” he said.Last week they sat down together during a series of reunions between family members separated during the Korean War that saw more than 500 South Koreans travel to the Diamond Mountain Resort in the North to meet with long-lost relatives.
After all the years and sorrow of separation, Lee was concerned he wouldn’t recognize his brother when they met. But he knew him immediately.”The first thing I said to him was ‘Thank you. Thank you for surviving and staying healthy,'” Lee Soo-nam said. “Then we all broke down and cried for a while.”The reunions are the latest gesture of reconciliation between North and South Korea, as Kim Jong-un and President Moon Jae-in plow ahead with confidence-building measures aimed at decreasing tensions on the Korean Peninsula over Pyongyang’s nuclear ambitions.The last time such meetings between families separated by the Demilitarized Zone took place was in 2015.

Whenever my mother passed by a young man of his age, she would run after him calling out my brother’s name.

While the neighboring rivals persevere with their efforts toward detente, the U.S. appears increasingly frustrated with a lack of progress since President Donald Trump’s historic Singapore summitwith Kim in June.On Friday, Trump said he had directed Secretary of State Mike Pompeo to delay a trip to North Korea, citing insufficient progress on denuclearization. NBC News reported in June that U.S. intelligence agencies believe Pyongyang has increased its production of fuel for nuclear weapons in recent months.North Korea’s state-controlled newspaper accused the United States on Sunday of “double-dealing” and “hatching a criminal plot to unleash a war.”‘This is about the future’During the reunions, family members met in a banquet hall overseen by North Korean minders, exchanging small gifts and sharing meals amid tears and fierce embraces. Because of the economic sanctions placed on the North under the auspices of the United Nations, South Koreans can only bring gifts worth around $100 to offer their relatives.Chung Hak-soon says she has not forgotten the day that she lost her older brother during the war, only months before the July 1953 armistice ended the violence that had claimed the lives of around 2.5 million civilians.”The village elder came looking for [him],” Chung said. “He was 16 years old.”

“My brother asked what he wanted, but the elder just told him to follow,” she said. “That was the last time I ever saw him.”With the war intensifying near her village and ever more Chinese and North Korean soldiers flooding through the area, the villagers fled to hide in caves. Chung was only ten years old when she, her mother, and two other siblings fled through the mountains, starving, until they reached U.N. lines where they were greeted by American soldiers.The fighting soon ended, but life in South Korea was hard at first for refugees from the North. Chung’s mother was haunted by the loss of her son.”Whenever my mother passed by a young man of his age, she would run after him calling out my brother’s name, hoping that he’d escaped,” Chung said. But it was never him. “Then she would cry her heart out.””Her heart was broken until she passed away,” she added.When this series of reunions was announced, Chung traveled to the office to apply in person.But when the Red Cross contacted her, the news was bittersweet. Her brother had survived the war, but had passed away years ago. He had left behind a family, however, and Chung would be allowed to meet her brother’s son and widow.Korea tensions

“I asked my sister-in-law how my brother had lived in the North, and she said he’d had a good life,” Chung told NBC News after their meeting earlier this week. “But he died thinking his whole family had been killed in the war, because he couldn’t find us when he came back home.””This is about the future,” Chung said. Someday, she hopes, the Koreas will be unified and families will move freely between the two. When that day comes, she wants her and her brother’s descendants to know about their cousins in the North and South.Time is slipping away for those who lived through the trauma of being torn away from their families during a war whose memory grows increasingly dim for succeeding generations. Tens of thousands South Koreans have applied for reunions, but only a fraction have succeeded in meeting their lost relatives. Over the decades since the war, many have died longing for the places of their birth, wondering if their kin were still alive.Lee Myung-jin’s father was born in North Korea’s Wonsan, and told his son he dearly wanted to return to see his birthplace.So the shipping company executive from Seoul had hoped he would be able to surprise his father with a trip back home. But it didn’t work out, and his father fell ill and passed away soon after.

“Before he died, my father asked me to promise that someday I would take him back and bury him in his hometown,” Lee Myung-jin said. “I’ll never forget the promise I made. I still pray that someday I can do it. But I’m getting old, I’m in my 60s now, and I fear the pledge will never be fulfilled in my lifetime.”On Diamond Mountain, as it was time to end the three day reunion, Lee Soo-nam saw his older brother crying and standing still as the South Koreans walked toward the buses that would carry them away.He knows it will be nearly impossible to see his brother again: So far, North Korea has never permitted South Koreans to see their relatives more than once during the carefully controlled reunions.”What can we ever say, to relieve this deep and heavy sorrow?” said Lee Soo-nam. “I can only wish that he will be well.”