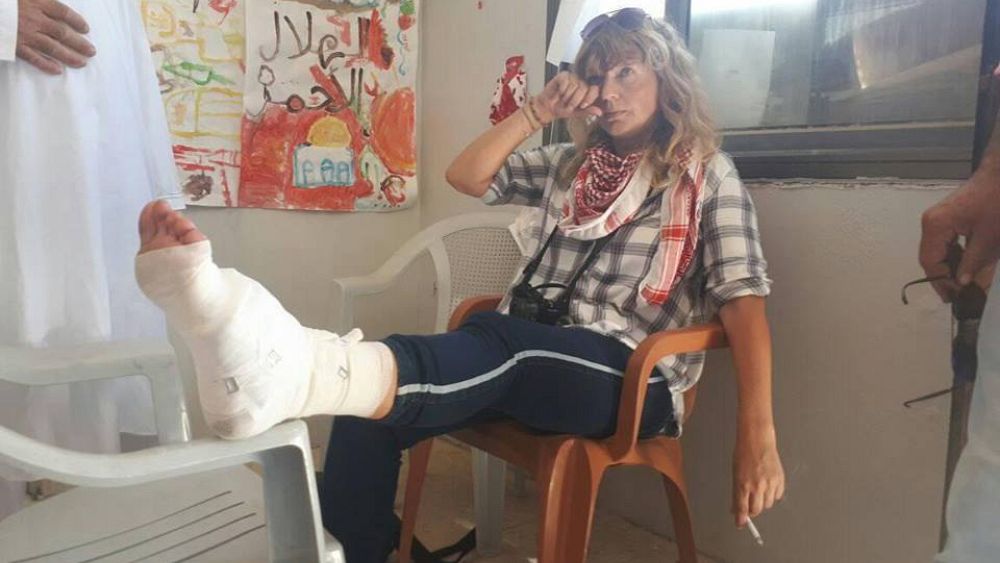 A Norwegian woman was shot twice in one week during protests outside of Nablus, in the West Bank, reportedly with rubber-tipped bullets.

Kristin Foss — an activist and member of the International Solidarity Movement — told Euronews the first incident occurred on August 18 in Kafr Qaddum while she was helping an elderly man get his car during demonstrations.

Foss said the man, in his seventies, had gone out to his driveway to get his car when he realised it was no longer where he left it.

“He didn’t realise the soldiers were there and they took his car and they parked in the middle of the road as an economic shield … so protesters don’t want to hit his car,” she said.

Foss, 43, and her Icelandic colleague Anna agreed to help the man. One reason, she says, was because the protests had quelled at this point and the other — which she says may have been “naive” — was because she thought she would have some sort of protection as an “international observer”.

The elderly man then went up to the IDF soldiers to see about getting his vehicle, and Foss said she remained about 20 metres behind with her friend while she was filming.

“One of [the soldiers] started shouting to us it was dangerous. And I said it was only dangerous because you’re pointing a gun at us. I think something else was said but he never gave us a warning that he was going to start shooting, and they shot one shot, and they shot another one — and it hit me right in the bikini line.”

It’s at this moment that she stopped recording video.

“I still cannot believe that they shot me when I had my hands up and clearly posing no threat. And I have it on video,” she said on Monday in a Skype interview.

Foss, who has been based out of Ramallah since July 3, returned to the Kafr Qaddum on August 24 with two Israeli activists, but she said she decided to stay at the back of the protests, near a local shop.

“I really wanted to go back to show that this happens to [Palestinians] every Friday and Saturday for seven years. And I wanted to show that I will also not be deterred by the IDF…”

Several Israeli activists then, according to Foss, asked the soldiers to leave and let the protest go on, and why they shot her a week earlier.

The IDF, she said, replied that they “never shoot women, and if they do, I would have been standing next to a troublemaker”. This was corroborated by one of the activists there to Haaretz, which reported that a “polite argument” then followed.

The activists later cleared out after the soldiers asked protesters to move and fired tear gas. Afterwards, demonstrators began to gather again and that’s when shots were fired. It was then that Foss was hit in the ankle and was taken to a nearby clinic.

Foss said she has never taken part in violence during protests, including rock throwing, and attends “in solidarity and to observe”.

She was one of nine people shot that day.

‘Stood among the rioters’

The Israeli Defence Forces did not deny the shootings took place when contacted by Euronews. But it said the protests were violent and demonstrators were targeting Israeli soldiers.

“For a long period of time, violent riots have been taking place every weekend in Kafr Qaddum,” said a spokesperson in an email to Euronews.

“On August 18 and 24, 2018, violent riots broke out in the area of the village, during which Palestinians threw stones at IDF soldiers and burned tires. The foreign national mentioned in the article, in both incidents, stood among the rioters whilst they carried out violence against the security forces.”

“The claims regarding alleged harm to uninvolved people by riot [dispersal] means, will be investigated and the findings will be examined by the Military Advocate General’s Office.”

‘It makes it a lot more personal’

For Foss, the two incidents and her subsequent injuries have prompted her to consider leaving the West Bank — but not just yet.

“I was supposed to fly out on Thursday, but I think I’m going to stay a bit longer and see what happens. I think it’s better if I’m here than going back to Norway,” she said.

“I was 100% committed already (to the Palestinian protests), but now that I was targeted directly, it makes it a lot more personal.

“I’m hoping maybe my case can get people to open their eyes to what’s actually happening here in Palestine because now I’m talking to you (Euronews) and I’ve spoken to lots of media — but the Palestinians, they don’t get any attention whatsoever.

“What happens to them is a million times worse than what happened to me.”