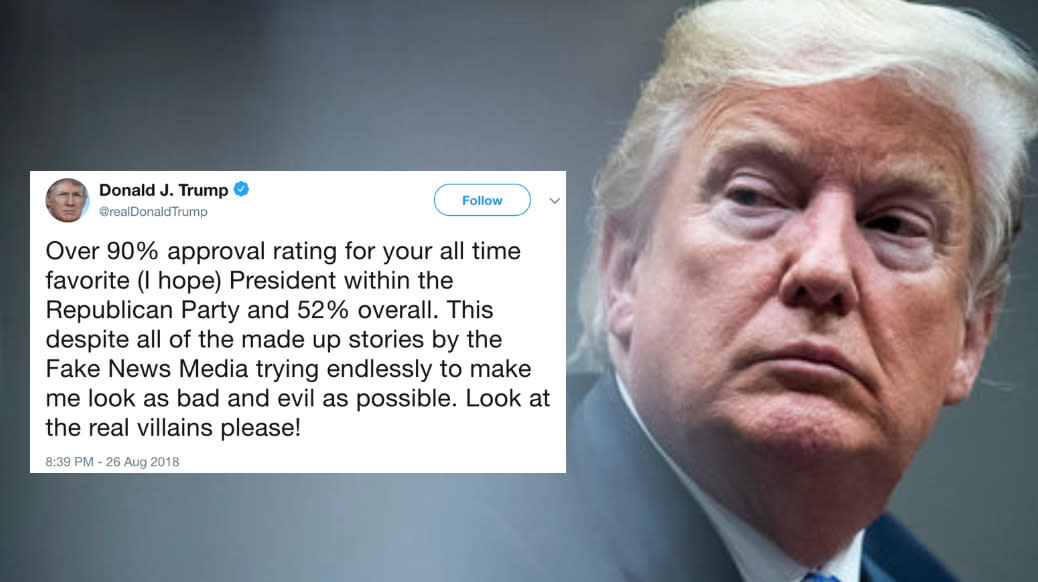 President Donald Trump attempted to brag about his approval rating on Twitter on Sunday night but instead misquoted the percentage and touted his disapproval rating.

“Over 90% approval rating for your all time favorite (I hope) President within the Republican Party and 52% overall,” Trump wrote in the tweet.

However, the poll by The Wall Street Journal and NBC News that Trump appears to be citing indicates that the president’s overall approval rating is 44 percent. The 52 percent figure is the portion of registered voters who disapprove of him.

Over 90% approval rating for your all time favorite (I hope) President within the Republican Party and 52% overall. This despite all of the made up stories by the Fake News Media trying endlessly to make me look as bad and evil as possible. Look at the real villains please!

The White House did not immediately respond to HuffPost’s request to clarify which poll Trump was quoting, though HuffPost did not find any recent polls that indicate a 52 percent approval rating.

The poll was conducted Aug. 22-25 just after Trump’s former attorney, Michael Cohen, pleaded guilty to illegally interfering with the 2016 election at the president’s request.

On Aug. 21, Cohen pleaded guilty to five counts of tax evasion, two counts related to an illegal campaign contribution and one count of making a false statement.

Despite this, Republican pollster Bill McInturff of Public Opinion Strategies, who conducted the Trump survey alongside Democratic pollster Peter Hart and his team at Hart Research Associates, told NBC that the president’s approval rating was “remarkably stable.”